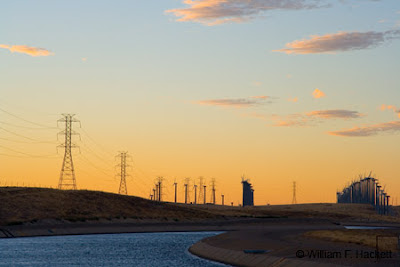 US rainstorm maps dating back to 1948 show how the changing weather patterns anticipate a very dry southwestern USA in the foreseeable future. This climate change is heading straight for California and its major water and energy infrastructures. A summary of a report by the California Energy Commission and Natural Resources Agency that combines the work of dozens of research teams and will lay the foundation for a climate change adaptation strategy for the state is due out by the end of this year. The slide presentation of this study is here at Mercury News.

What's great about this study is that it examines many aspects of climate change impact, from energy and water to how high-elevation hydropower is particularly vulnerable to climate change and reduced snowpack. It also warns of deteriorating ecosystems and higher fire danger, more risk to our natural resources. Water is indeed the most critical resource for human civilization, as prehistoric habitation collapse has shown us.

This public policy document will seriously impact the statewide planning processes in the state going forward, particularly the critical Bay Delta Plan, which is still undergoing major disputes, mainly with the issue of draw down of water from the Delta for Southern California water supplies.The two water tunnels that would accomplish this are part of Governor Brown's controversial input into the Conservation plan. The chair of the Delta Stewardship Council, Phil Isenberg, has some cogent points laid out in his analysis of this proposal. The Stewardship Council was created by the legislature in 2009 to provide a balanced oversight of water plans for the California delta.

Another group, Restore the Delta, has a focus on preservation of the natural processes in the Delta. This is a group of local activists that got together in 2006 to give voice to this issue, and have proven very influential in state public policy. This is just the tip of the iceberg in terms of water policy and management, which is vastly complex in a state that developed at top speed over the last century. There are 3 main water sources coming into the Southern California region serving different geographic urban areas:

California Aqueduct- constructed in the 1970s

There's also a mare's nest of agricultural water rights all throughout the central valley and Southern California, designed and built around the wettest years (1905 - 1924) on record in the region. So this system can't deliver the anticipated water quotas from historic periods, let alone the water needed to preserve the natural systems and supply the current urban areas of Southern California.

This is the resource and climate challenge that the human global impact has for all of us. Dead ahead.