The USA Moves On 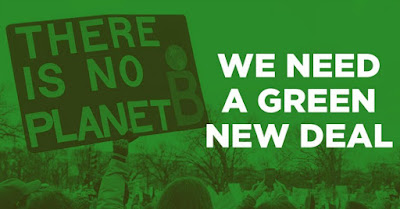 "Whether or not the U.S. decides to take action on climate change, the shape of the country—its towns, offices, homes, schools, roads, farms, and more—is on the brink of a radical transformation. This transformation could be borne out in two ways. The first is external: Escalating storms, floods, droughts, mass migration, food scarcity, and economic instability could dramatically alter the physical landscape and economy. The other is internal: A national effort to retrofit millions of buildings and rethink the way communities are designed could help Americans withstand the ravages of climate change and make the country more equitable."

The resolution known as the Green New Deal, published by Representative Alexandria Ocasio-Cortez and Senator Ed Markey in February, wants to bring about the latter. The Green New Deal framework describes the monumental changes needed to decarbonize the American economy by meeting 100% of our energy demands with zero-emission sources in the next decade. The full text is here. It will require overhauling major industries like energy and agriculture, but also transforming America’s buildings and construction sector.

At the same time, many cities and states are starting to implement their own climate policies in spite of the vacuum at the Federal level by the Trump administration. California is famously in the lead with its policies and trade agreements with other states and governments. As of September 2018, it has established a comprehensive set of policies and legislation in order to create a rapid turnaround in the reduction of greenhouse gas emissions.

Much credit belongs to Extinction Rebellion NYC, which has done breakthrough work on securing this declaration. We are proud to have collaborated with them, helping to draft the declaration and supporting in other ways. Our executive director Margaret Klein Salamon testified for the declaration before the City Council on Monday, along with organizers from Extinction Rebellion and Fridays for our Future. Here is a text of the declaration. Now, along with a growing list of partner orgs, we are calling on Congress to declare a #ClimateEmergency — an effort that has already gained thousands of signatures within just a few days.

It seems that the political climate is also now rapidly changing in the USA, driven by a vision of abundance in a massive effort to decarbonize and restructure energy and the built environment.

Update 6/27/19: California and Canada announced they will work together to combat climate change.

Update 9/24/19: Former Secretary of State John Kerry: “The United States will be back at the table after 2020"