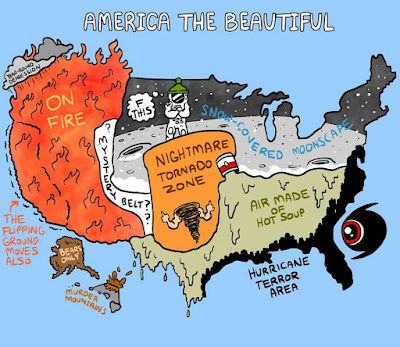 "Attempts to encourage journeys to be switched to rail from the more carbon dioxide emitting air and car forms of travel have largely failed as the characteristics and attractions of all carbon-based modes – including those claimed to be justified on the grounds that per passenger-kilometre they are more energy efficient – have simply led to more travel, especially in long-distance journeys."

The traffic planners all understand this problem of adding highway capacity to existing networks - they simply add to traffic problems because more traffic shows up to clog the network. So planning has started to focus on becoming more efficient with automobile transit design and highway expansions. But it hasn't solved the underlying problem of traffic jams and increased pollution; same story. And sadly that's the fundamental, unidentified problem: carbon emissions. Tinkering around the edges with electric engines and trains doesn't solve it.

By the same token, the switching of the physical issue of transport from air travel to rail, or highway to rail, avoids solving the problem itself, which is that moving bodies and cargo around are the basic drivers of energy consumption. This, of course creates more "value" attributable on accounting spreadsheets as an increase in GDP. But it's obviously a false metric if the environmental damages of this human behavior aren't accounted for. Once all the factors are examined vs. the amounts of money required to build and maintain these massive systems, it doesn't actually pay back or even make much sense. Its only "advantage" is that public dollars are used to offset and conceal the actual impact of these systems. It's the equivalent to the old factory stacks that dumped pollution into the air without accounting for its effects because "the commons" was assumed to be free to all for use. And that's the Tragedy. This problem could use some good economists.

"Impressive though recent efficiency gains are, switching to energy renewables and low-carbon developments makesno contribution to reducing the concentrationof emissions. It can only reduce the rate at which the concentration continues to rise." - Mayer Hillman

Part of the UN-level discussion on GHG emissions includes the analysis by Mayer Hillman, which is a very strong position that supposedly more efficient travel systems leads to MORE travel and more emissions, not less. Especially considering that something like the proposed California High Speed Rail (HSR) is in *ADDITION TO* all the other existing systems of travel, all of which continue to dump GHG's into the atmosphere. It's an appeal to the engineering and large infrastructure industry. Hence the discussion of California's completely inadequate HSR concept which spends billions of dollars to basically no effect, except to create more emissions and higher populations and makes the whole problem worse. The concept was politically designed (not engineered) over a decade ago on outdated policy information, as was cap-and-trade.

We're seeing this in California with Governor Brown's pet project, the HSR, a boondoggle if there ever was one. It doesn't even work at a basic engineering level, but the massive AEC firm (Parsons Brinkerhoff) that is running the project has to "feed the monster" to stay in business. It doesn't actually work as High Speed Rail anymore because of this configuration wandering around the Central Valley instead of directly connecting SF and LA. Its inception was a political deal to link together the small cities in the Central Valley to feed growth, of course, and get millions of "housing units" built in the hottest area of California that is currently agricultural. Its water supplies are diminishing, the aquifers are collapsing from overdrafting, and large areas are ruined for agriculture because irrigation and fertilization has rendered the soil unusable from the accumulated salts, particularly on the west side of the Central Valley. Not to mention that the crops are now almond trees and the product is shipped to China in heavily polluting tankers.

It gets better. Governor Brown is using a good portion of the funds from the Cap and Trade program (!!!) to try to pay for this HSR project, since the Federal Government and private industry won't step up to the plate. It doesn't pencil out, and there is massive public objection to this whole thing (for good reason). The fact that this whole HSR doesn't actually have any demand for travel - we have several highways, a metro train and LOTS of air travel between LA and SF - seems to be irrelevant to the politicos who planned this whole fiasco. It's just about populating the Central Valley and getting more GDP out of it now that agriculture seems to have maxed out. Everybody wants revenue and the real estate industry has always been the answer to that in this state, it's very nineteenth century. California is only about 150 years old in terms of its settlement history; it's not like Europe. The plumbing that makes the Central Valley possible is only about 50 years old, it's all imported from the northern part of the state with giant pumps and aqueducts built since about 1960, and we're seeing the immense problems created by only a half century of re-engineering the state. It's becoming increasingly apparent that the "solutions" to the population explosion in the cities of southern California has drastically amplified the potential damages to the environment and to the huge population of people living here; setting itself up for disaster because none of this is really sustainable in a warming planet that's cutting off the rain.

Now let's add the ports of Los Angeles, San Pedro, San Diego and San Francisco, which are the biggest emitters of pollution from cargo transit on the west coast. Air quality in LA is the worst in the nation because of the shipping which depends on oil, and the dirty trucks that are used on the highways to get the stuff to inland warehouses before it's put on rail to the midwest and east coast. Naturally, China has the dirtiest shipping industry on the planet and a big chunk of it comes here, along with all that stuff that's no longer manufactured in this country but ends up in our landfills. Or actually the cars end up in Mexico and South America for the last third of their useful life; Mexico City is swarming with old Volkswagens and used Japanese Hondas.

So the whole thing feeds on itself because more transit and shipping begats more GDP, and therefore the "demand" is the quantifiable metric but not the energy consumption and pollution because its impact is hidden in "the commons". That's why this emissions framework has got to be tied to the equity of the commons, because that's the only benchmark that accounts for the impacts. The political assumptions driving this destructive development and expansion are actually quite delusional, yet it's the basis for public policy in this country, as well as in China, which has been building empty cities connected with high speed rail (which is counted by China as GDP even though nobody's bought the stuff yet).

We're going to drive ourselves to extinction because of our collective insanity, that's all there is to it. We could stop it tomorrow if we could just wake up and recognize the problem we're creating. So a framework for dramatic change has to be implemented, using the carbon tax as a tool. It's the only way we're going to be able to deal with the reality that carbon emissions must stop almost immediately. By itself a carbon tax doesn't work fast enough, it's just a lever. This approach is now under serious discussion at the World Bank and IMF, so there is yet hope that the world can take the steps needed to address climate change, in spite of our proclivity for "growth" at all cost.

Update 5/24/16: A projection of land-use change in California - urbanization will be the primary cause of greater water demand in the state. Precisely what the HSR is designed to do.

Update 1/3/17:  The entire supply on the Colorado River has become less reliable, threatening the water supply