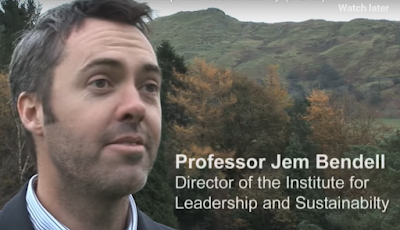 Jem Bendell is a British professor of sustainability leadership and founder of the Institute for Leadership and Sustainability (IFLAS) at the University of Cumbria. In 2018, a climate paper by Professor Bendell went viral, being downloaded over a million times. It helped to launch a worldwide movement of people seeking to reduce harm in the face of societal disruption and collapse. Jem explains the concept of Deep Adaptation, how he developed the idea, what it means in practice, what he says to critics, and what his new book on the topic is about.

A published rebuttal to Bendell's original paper, from Jeremy Lent, disputes that collapse is inevitable and that other scenarios should be considered. Bendell's subsequent reply to Jeremy Lent emphasizes that the scale of the necessary changes are more than we can manage:"The wider destruction of the biosphere is itself a horror, is exacerbated by rapid climate change and drives species extinctions. The term “climate breakdown” has become popular in activist rhetoric but is not clear. A climate does not really “breakdown” – it changes. Sometimes it changes so fast that it leads to a breakdown in ecosystems. By which I mean a complex living system such as a forest, wetland, or hillside, shifts from one state to another, with a major change in the wildlife as well as nutrient and water cycling. To say rapid climate change “is merely a symptom of a larger crisis” misrepresents the specific existential threat involved."

"The approach of the paper is to analyse recent studies on climate change and its implications for our ecosystems, economies and societies, as provided by academic journals and publications direct from research institutes.That synthesis leads to my conclusion there will be a near-term collapse in society with serious ramifications for the lives of readers. The paper does not prove the inevitability of such collapse, which would involve further discussion of social, economic, political and cultural factors, but it proves that such a topic is of urgent importance. The paper reviews some of the reasons why collapse-denial may exist, in particular, in the professions of sustainability research and practice, therefore leading to these arguments having been absent from these reviews."

"It is a truism that we do not know what the future will be. But we can see trends. We do not know if the power of human ingenuity will help sufficiently to change the environmental trajectory we are on. Unfortunately, the recent years of innovation, investment and patenting indicate how human ingenuity has increasingly been channelled into consumerism and financial engineering. We might pray for time. But the evidence before us suggests that we are set for disruptive and probably uncontrollable levels of climate change, bringing starvation, destruction, migration, disease and war (Servigne and Stevens, 2020)."

The Deep Adaptation Forum is here.

Update 8/5/22: Don’t be a climate user – an essay on climate science communication