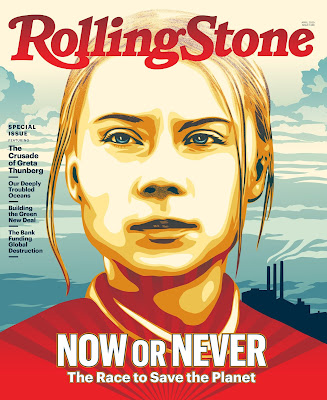 The determination of the the lethal turning point on carbon emissions has become fraught with the recent admission by the IPCC that existing models have not accounted for the feedback effects from nature as the planet warms. The speed with which the carbon emissions are ramping up, and the "drift" from this has made it abundantly clear that we are experiencing a climate emergency that current models didn't predict. In order to have any impact on future solutions the course correction involved makes it necessary to head for zero carbon by 2036.

Rolling Stone has authored a special issue featuring a biography of Greta Thunberg, the young girl who has famously made it her mission to force her elders to actually do something about the carbon emissions, the lack of a carbon framework not withstanding. The image above is their magazine cover.

The Guardian's view on the climate catastrophe facing Earth - an editorial - echoes the critique of our current situation:

"The scientists had been charged by the IPCC, which had been set up two years earlier, with establishing whether climate change was a real prospect and, if it was, to look at the main drivers of that threat. They concluded, in a report released in August 1990, that the menace was real and that coal, gas and oil would be the principal causes of global heating. Unless controls were imposed on their consumption, temperature rises of 0.3C a decade would be occurring in the 21st century, bringing havoc in their wake.

Three decades later, it is clear that we have recklessly ignored that warning. Fossil fuels still supply 80% of the world’s energy, carbon dioxide levels in the atmosphere continue to rise and global temperatures are still increasing. According to Met Office statistics, there was a 0.14C increase in global temperatures in the decade that followed publication of the first assessment report. This was then followed by a 0.2C increase in each of the following two decades. The world could easily heat by 3C by the end of the century at this rate, warn scientists."

James Hansen calls out the still-increasing carbon emissions which currently have not decreased at all, despite his advocacy for over 30 years while he was with the NASA Goddard Institute for Space Studies in New York City. Our planet is in deep peril, after complete inaction after his June 23, 1988 white paper that raised the alarm about carbon emissions. The subsequent Kyoto Protocol was finally amended in 1997 and was signed by President Clinton, only to have George W. Bush withdraw the United States from the Kyoto Protocol in Mar. 2001 due to Senate opposition.

The climate policy push is at risk of stalling on a national level as well. The U.K. scaled back plans to put environment at the center of its budget in April. Spain, which has made climate change a central part of its political agenda, halted all legislative activity for at least two weeks and declared a  state of emergency in early March due to COVID-19. Despite the temporary setbacks, European Commission president Ursula Von der Leyen said in March that the European Union remains committed to its Green Deal, a moonshot plan to make the bloc carbon neutral by 2050.

Per Scientific American, leaders in the U.S. must shift their mindset from one focused on an end goal of “decarbonizing ourselves by 2050 and pressuring other countries to do the same” to one of “scaling up every necessary clean system (by much sooner than 2050, so each has time to roll out fully around the world once cheap enough) to make decarbonization affordable worldwide.”