State of the State and the World 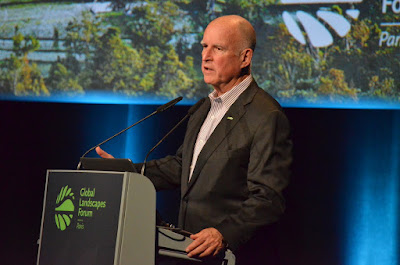 From Maven's Notebook, a portion of the transcript of Governor Brown's State of the State address 1/21/16:

Besides the immediacy of the drought, there is the overarching threat of a warming climate. Incredibly – though last year was the hottest on record – there are still those, particularly in Washington, who are in denial. But even the deniers can’t deny the carbon pollution that exists all over the world. It is causing serious injury and respiratory disease to people of all ages, but especially the young and very old.Thankfully the rest of the world has heard the message: Humankind must change its ways and radically decarbonize the economy.

The Paris climate agreement was a breakthrough and California was there leading the way. Over 100 states, provinces and regions have now signed on to our "Under 2 MOU". The goal is to bring per capita greenhouse gases down to two tons per person. This will take decades and vast innovation. But with SB 350, we’re on our way.

Prior to this on October 7, 2015, the Office of the Governor had announced the signing of SB 350, which codifies goals Governor Brown laid out in his January 2015 inaugural address to double the rate of energy efficiency savings in California buildings and generate half of the state's electricity from renewable sources by 2030.

The Pacific Coast Collaborative, headed by Governor Brown, attended COP21 on December 9, 2015 as an association of governments acting under a collaborative trade agreement started in 2008 under Governor Schwarzenegger. It brings with it a cap-and-trade market that is already functioning in California and on the west coast.

At the UN Climate Conference in Paris, Governor Brown and the German Government Announce 43 New Signatories to the "Under 2 MOU Climate Pact". The Climate Group, which will serve as the Under 2 MOU’s secretariat, is an international nonprofit that works with business, state and regional leaders to promote a prosperous, low carbon future. Last year, with the backing of the United Nations, it helped to create the Compact of States and Regions, a complementary initiative to the Under 2 MOU that works with governments to measure and report progress toward their emission reduction goals and ensure accountability.

With support from Kevin De Leon, SB 350 pushes decarbonization of California's economy, in particular renewable energy and efficiency goals, along with other changes to boost clean power.It begins laying the groundwork for a regional electricity grid powered by renewables, solar and wind power.

What these various news reports gloss over is that the Pacific Coast Collaborative exists basically to set up a cap-and-trade market that is favored by corporate interests, which is probably why COP21 did not produce a full framework agreement, aside from the fact that Republicans in the Senate would never ratify a carbon tax or a commitment to a framework. Here's some background on these historic agreements which includes Governor Brown's efforts in Sacramento since he was elected in November 2010.

It began to gather speed in 2011 under California's AB 32, which established the cap-and-trade structure. A couple of years later, this diplomatic and business exchange expands to a China Trade agreement. California formalizes these bilateral agreements in October of 2013 and establishes leadership in global trade using the cap-and-trade model, which moves forward as 2MOU. Note that these are not formal binding contracts, or treaties, between governments, but rather the establishment of a type of carbon trading market. An example of a formal treaty is the UN Framework Convention on Climate Change in 1992, the Kyoto Protocol, which was not signed by the US or China.

Ultimately, California and the Climate Group agreement presented at COP21 didn't fly. There remains the uncompleted Kyoto Protocol that undergirds the intent of COP21 which did agree to set the 2C goal of temperature increase since preindustrial times, with the understanding that 1.5C was actually the more realistic target to preserve planetary ecosystems intact.