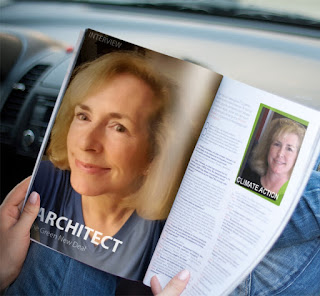 As an architect who has spent a career dealing with the physical and environmental impacts of investment calculations, I am acutely aware of the shortfalls of urban development and its destruction of the living biosphere. I've discussed these problems professionally as well as with people who are deeply concerned about our environment and trying to achieve a consensus about how to manage our existence across the planet via the 25-year-old COP mechanism of the UNFCCC. This has finally risen to the level of global discourse through scientific study and documentation of the critical state our planet and our civilization is approaching.

This holds true for the instable fingers of social media that move waves of social change. This is also true for the escalating climate damages and population migration due to the impacts of climate change that are more and more apparent to people across the planet. We are approaching a critical state that is based on the very real disintegration of the life support of our human civilization because of false GDP metrics embedded in corporate extraction supply chains that have no accountability to governments and their populations. These mechanisms are now larger than many countries, and invade their sovereignty with trade agreements, the pipeline through which wealth flows. The human reaction to this is governmental authoritarianism and a digital realm of chaos and rising conflict.

Climate researchers can measure in real time what happens to carbon emissions when one of the world's largest economies is suddenly stalled, with entire cities locked down, highways emptied, airplanes grounded, factories shuttered and millions of people confined to their homes. A continent away, from his base in Helsinki, Finland, Lauri Myllyvirta was able to piece together industry and financial data sources and satellite imagery to calculate the COVID-19 epidemic's impact on emissions in China: a decrease of about 25% in three weeks. "In terms of the absolute volume of emissions, this is absolutely unprecedented," he said. Clearly human behavior drives this and can be rapidly changed.

Christiana Figueres, former executive secretary of the United Nations Framework Convention on Climate Change (UNFCCC) from 2010-16, endorses Extinction Rebellion's civil disobedience campaigns to save the planet. To quote: “Civil disobedience is not only a moral choice, it is also the most powerful way of shaping world politics. Historically, systemic political shifts have required civil disobedience on a significant scale. Few have occurred without it.” I think we're smart enough to tackle the damage we've done to our planet if we mobilize globally and rapidly engage in multiple strategies. I'm starting to see it move, and Figueres is adding fuel to it with her new book.

The top-down consensus COP model has been blocked by corporate fossil fuel money in the US and Britain, and because of it, there is a blowback mobilization by people all over the planet that is creating the instability that underlies an avalanche of change. Cornell University professor Robert H. Frank makes a far better case for individual action because he uses social science to do it. Individual action to protect the climate “is far greater than most people realize, for two related reasons,” Frank writes. “First, they have the power to shift how the people around us behave. Second, and more important, they change who we are, making us much more likely to support the large-scale policies needed for progress. “Conscious consumption alone certainly can’t stop the warming threat,” Frank adds, “but it’s an essential step on our path forward.”

Climate activist lawsuits are also making headway in the higher courts. Friends of the Earth and Plan B took the position that the Paris Agreement is in UK law, and they both argued policymakers should have to consider it.. David Wolfe, attorney for Friends of the Earth, said the government should have considered emerging discussions and evidence on climate change when making its decision. Plan B’s Tim Crosland told the court that the Paris Agreement’s aim of limiting global warming to “well below” 2 degrees C has been the “lynchpin of government and international policy” since December 2015, so the government was bound to take it into account. Britain’s Court of Appeal issued a landmark ruling on Feb. 27 that stymied plans to build a third runway at Heathrow Airport in London, declaring that the government illegally neglected its commitments to reduce carbon emissions and protect the planet from dangerously high temperatures.

This lawsuit is based upon the Paris Implementation Blueprint, authored by Tim Crosland, Aubrey Meyer and Margaretha Wewerinke-Singh. Aubrey Meyer has developed a framework proposed for adoption by the COP for many years that could possibly come alive again as the waves of social change give it the impetus necessary to bring all parties to the table, which argues for its rapid adoption rather than abandonment. He has kept track of the immense challenge ahead of us to keep our planet from moving into an extinction event under our current carbon emissions impacts. The rising awareness of this has spurred more collaborative initiatives to address the problem at the local level.

In September of this year, thousands of climate leaders are coming to San Francisco for the Global Climate Action Summit. The event will bring together governors, mayors, legislators, CEOs, investors, researchers, and more from around the world to demonstrate progress, set more ambitious and measurable goals, and encourage national governments to go further faster. They would be wise to look to the Paris Agreement as a basis for their actions.

Update 3/27/20: Homer-Dixon’s synchronous failure framing. The economic impacts are going to go far beyond the stock market and surface measures such as GDP.