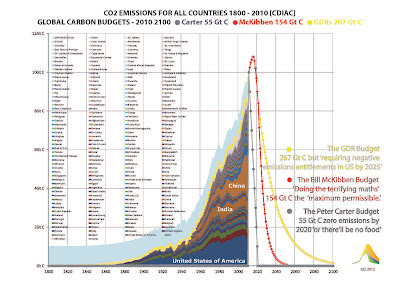 A proposal on the table from the Global Commons Institute provides a strategic way of reducing global carbon emissions in time to prevent runaway climate change: Contraction and Convergence (C&C). C&C was established and has been on the record as a formal well-supported position at the UNFCCC since 1996. A briefing, explanation and chart are here.

Back in the mid-1990s, Aubrey Meyer, in developing the case for C&C, set down a model for analyzing the implications of any proposal aimed at informing policy makers on how best to organize at the UNFCCC to limit the ravaging consequences of climate change. On a clear axis of time-dependency, this covered the key elements:

[a] the rate of accumulation of the carbon dioxide accumulating in the atmosphere;

[b] the various rates at which the emissions contribute to that globally [contraction]; and,  within that,

[c] shares converging internationally on the global per capita average arising under any rate of contraction (with or without a population-based year set for any year chosen within the contraction process).

As you can see from the above chart, the principle is that all countries contract in a coordinated way in order to limit the temperature change that is generated by carbon emissions. In 1996, CGI's goal was to keep the temperature increase below a further 0.5 degrees C in 2060 with zero emissions at that point, so that carbon is limited to 350 ppmv in 2100, the original C&C intervention at COP-2 1996 Geneva. While this principle was supported, that rate wasn't, so the slower rate of 450 ppmv was proposed.This hasn't been adopted, while we quarrel, and temperatures have already risen by about 0.8 degrees C. We've already passed 350 ppmv and are nearly at 400 ppmv in 2012, and are still pouring out carbon. So now we have a global emergency.

In reacting to this situation, James Hansen has inspired a group of activists who are positioned now on climate change with 'extreme urgency'. This is further supported by his recent article in the Washington Post. Last year Dr Hansen, together with 14 other leading experts in various disciplines relevant to global climate change, concluded that 1 degree C since 1900 is the danger limit for avoiding future planetary climate catastrophe. We are at O.8 C today. Previously Dr Hansen has published that in order to avoid planetary climate catastrophe the atmospheric concentration of carbon dioxide has to be held below 350 ppm. Today it is 393 ppm and rapidly rising.

Recently, after being criticized by European leaders after the May climate talks in Bonn, Todd Stern of the US State Department qualified its support for a U.N goal of limiting global warming to 2 degrees C above pre-industrial levels in 1900, and made it clear that all countries must reduce carbon emissions forthwith, not just first-world countries. This is a key statement, because it throws out the political carbon allocation derived from GDP analytics, and retreats from historical support of C&C (pg. 13, Equity and Survival)

Bill McKibben's recent article in Rolling Stone has since triggered much public debate about how to address the reduction of global carbon. The debate is contentious because of the importation of the GDP measure into the allocation formula in order to amplify the carbon emission reduction in a "polluter pays" scenario, which was part of the Copenhagen and Cancun agreements. As I've discussed before, this is not based upon science, but rather imports political agendas into the contraction allocation formula. Two of the discussed GDP - based scenarios in the chart above are:

[1] the red curve is the McKibben formula for no more than 154 Gt C "Maximum permissible", but using GDP allocations to create negative emissions for the USA by 2025 within the 1Gt C/yr from 2010, arriving at  0 emissions by 2040. Bill claims that 2 degrees C by 2100 is a safe temperature increase, but notes that there's only 154 allowable Gt C left before we exceed planetary limits.

[2] the yellow curve is the GDR curve which is nearly twice that at 267 Gt C., requiring negative emissions entitlements in the US by 2025, created by GDP allocations. In other words, allows overall more carbon but hits the US much harder. It's now preferred by McKibben, and also by Jeffrey Sachs, who at the same time was a co-author of the Hansen Paper from which McKibben drew his 154 Gt C. The original source of this is Hansen's Carbon Budget of 166 Gt C [i.e. reducing @ -6%/yr from 2010].

The third allocation calculation that is very immediate and urgent is one that is a straight emissions reduction per capita, with no GDP "adjustments". It reflects the urgency that is created because we're already committed to an apparent 2° C by 2100 by not having done anything. That much climate change is now considered dangerous, and so an immediate reversal is necessary:

[3] the grey curve is Peter Carter's 2012 emergency energy conversion and food security budget: virtual zero carbon emissions in 10 years with negative carbon to follow. 1Gt C per year from 2010 arriving at  0 emissions by 2020, in order to restore the 350 ppmv level of carbon in the environment at 2050. That's essentially where we are today with our extreme climate events. If you've done the real math, you know that it means massive reductions in carbon emissions, energy use and global stranded investments.

An interactive chart showing many options is here. You will see that under the IPCC scenario we never get back to the planet we used to have in 1950, when global warming had already started at about 310 ppmv.

Humankind's legacy must rapidly shift to a model of sustainable development and re-establishment of the natural processes that we have eroded.  We are near the end of our planet's ability to support our civilization.