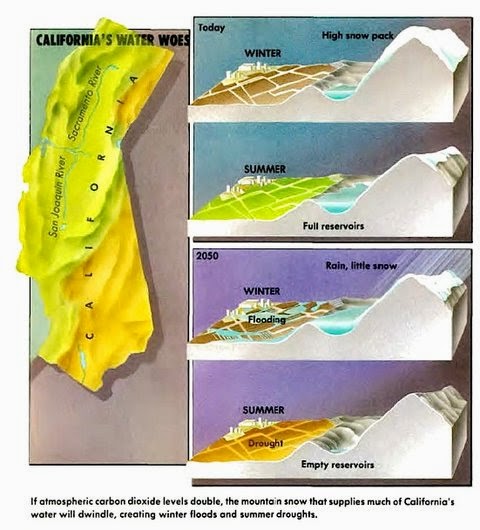 The National Integrated Drought Information System (NIDIS) Drought Monitor has a portal for the current global drought conditions. The status as of right now is this:

By the end of March 2015, a preliminary look at drought indicators points to a general degradation in drought conditions throughout the month.   Europe was mostly wet in March with the exception of the Iberian Peninsula and the Great Britain. Conditions around the Mediterranean  and Black Seas have improved during the past few months.  In Asia, drought continues to be focused in the eastern part of the continent.  Very dry conditions exist from Russia, through Mongolia and China, and into northern India and Southeast Asia.  In Taiwan, water restrictions are in place and two northern cities are experiencing a stop to their water supply service two days a week.

A recent report on Taiwan reveals that water rationing is underway. Water supplies will be cut off entirely for two days each week, on a rotating basis, in several northern cities due to lack of rainfall. In São Paulo the primary reservoir at Cantareira feeding much of the metropolitan city is nearly bone-dry. People in São Paulo are resorting to deliveries from bicycle riders carrying jugs of water. Others are digging their private wells on their own land or even in basements, which can lead to contamination issues. Those who can afford it are hoarding water, and the more resourceful are using cisterns and building rainwater catchment systems.

We're seeing a global impact on water supplies as areas of very high population experience drought as the planet warms up and dries out. The snow and glaciers no longer provide the spring water supplies that many areas rely on because of the lack of precipitation over the winter. In the United States, the western pacific states, particularly California, are in extreme drought, which is bad news for the California central valley that provides most of the produce sold across the country and about 28% of the crop that is exported to countries such as China, as well. Central Valley farmers are unlikely to receive water from the region's major irrigation project this summer, which means that growers will probably have to idle more land — and produce fewer crops — because there is simply not enough water for all of their fields.

So what is drought? It's a condition where the population's requirements for water outrun the resources of a region or country. California's drought is a periodic phenomenon with a historic record showing its fluctuations, documented by a report from the California Department of Water Resources (DWR). It's an excellent study dated February 2015 (large file). But it's also exacerbated by the climate change that severely reduces the snowpack that's critical for the water supply in the Central Valley as well as the urban areas of the state. The urban areas have their own issues of inefficiencies and waste, consider the ongoing freshwater supply pipe breakage because of a deteriorating infrastructure in Southern California, especially in the city of Los Angeles, with regular flooding from water main breaks. California Governor Jerry Brown has therefore declared 25% water reductions in urban areas by executive order, emphasizing that climate change impacts are not a hoax.

A very good summary of the arguments developing over water in this state between agriculture and the large urban populations is summarized in an article in Grist magazine. It's not a simplistic problem that can be reduced to the blame game or pie-in-the-sky technology fixes; the best approaches to solutions involve far better management of lands and watersheds as well as recycling and reducing demand. It's a search for resilient solutions to the problem of limits. It's also a shift in expectations that the local populace has about their lifestyles, namely, the "English estate" lifestyle versus the reality of a dry Mediterranean climate. This inevitably leads to a discussion of population reduction or relocation, which still seems to be the "third rail" in climate dialogue and resource allocation negotiations.

Three agencies will implement a first-of-its-kind federal commitment to support resilience of the nation's natural resource via landscape partnerships at the national level. The Resilient Lands and Waters Initiative is a key part of the Obama Administration’s Climate and Natural Resources Priority Agenda, a first of its kind, comprehensive commitment across the federal government to support resilience of America’s natural resources. This is the necessary level of effort required of nations and regions in order to face the climate change impacts that have now become inevitable.