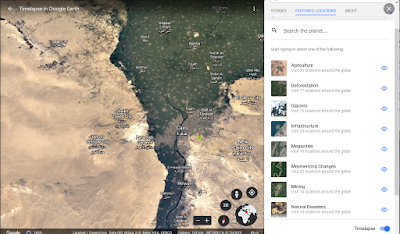 The largest database on earth, Google, has now trained its sights on our planet, using its developed Google Earth platform to integrate information across time and place to show how we have RADICALLY changed this planet in a few centuries, and not for the better. The Google maps are now integrated with satellite databases to render the changes in our planet over a timescape of 35 years or so. Its very simple to jump to the navigation dashboard and view the resulting videos.

"As far as we know, Timelapse in Google Earth is the largest video on the planet, of our planet. And creating it required out-of-this-world collaboration. This work was possible because of the U.S. government and European Union’s commitments to open and accessible data. Not to mention their herculean efforts to launch rockets, rovers, satellites and astronauts into space in the spirit of knowledge and exploration. Timelapse in Google Earth simply wouldn’t have been possible without NASA and the United States Geological Survey’s Landsat program, the world’s first (and longest-running) civilian Earth observation program, and the European Union’s Copernicus program with its Sentinel satellites."

"Try it for yourself, and you may not like what you see. Watching the Timelapse unfold is a pretty shocking experience, especially in areas such as the Amazon rainforest, where untold devastation is happening as land is deforested and repurposed for farming. Seeing just much the ice is melting in places like Antarctica and Alaska is similarly depressing.

Naturally, Google will be updating Timelapse every year from now on, and it promises to keep it updated for at least another decade. That way, we’ll be able to continue to see how our planet is changing, and what human beings are doing to continually mess the whole place up."

This new time-based planetary exploration takes the standard NASA time lapse to a new dimension, which shows the changes in nature as well as the expansion of urban sprawl. Previously, this time-lapse video crammed 20 years of Earth into just a few minutes. Google helped scientists learn a lot more about global warming and how the earth is changing.

Fortunately, with the new Biden administration preparing to address the climate issues with tremendous reserves of science analysis and highly structured data, there's a ray of hope that capitalist "business as usual" is no longer the prevailing norm. There's now hope for a livable future, with a focus on competent solutions to the horrific global problems that threaten the planet's existence.