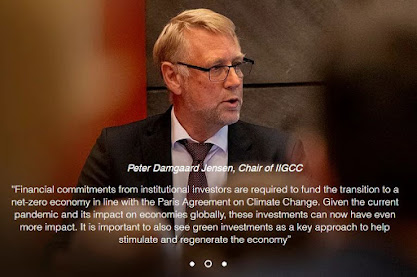 Typically Southern California's wet winter weather sets in during the month of November. This year, there has been NO RAIN. It's an ugly portent for our future, with an ominous potential for even worse wildfires than we have seen this past year. Visions of water rationing and massive rate increases are now in the offing.

It's imperative for global cooperation to happen right now for potentially getting to zero carbon emissions. ""This decade is a moment of choice unlike any we have ever lived," says  Christiana Figueres, the architect of the historic 2015 Paris Agreement.  The daughter of Costa Rica's beloved President José Figueres Ferrer,  she shares how her father's unwillingness to lose the country he loved  taught her how stubborn optimism can catalyze action and change. With an  unshakeable determination to fight for the generations that will come  after us, Figueres describes what stubborn optimism is (and isn't) --  and urges everyone to envision and work for the future they want for  humanity."

The United Nations, United Kingdom and France were proud to co-host the Climate Ambition Summit 2020 on Nov. 1 - 12, in partnership with Chile and Italy. This is a monumental step on the road to the UK-hosted COP26 next November in Glasgow. The COP26 summit brought parties together to accelerate action towards the goals of the Paris Agreement and the UN Framework Convention on Climate Change. The COP26 Presidency will demonstrate the urgency and the opportunities of the journey towards a zero carbon economy and the power of international cooperation to address the gravest challenges the world faces.

Many countries are also still pouring money into high-CO2 activities as they strive to recover from the coronavirus crisis and recession. Guterres noted that G20 countries were spending 50% more in their stimulus packages on fossil fuels and CO2-intensive sectors than they were on low-CO2 energy.

The UK will stop funding overseas fossil fuel projects.“This is unacceptable,” Guterres told the online Climate Ambition Summit, co-hosted by the UN, the UK and France. “The trillions of dollars needed for Covid recovery is money that we are borrowing from future generations. This is a moral test. We cannot use these resources to lock in policies that burden future generations with a mountain of debt on a broken planet.”

The US awaits the re-entry to the Paris Climate Agreement in January, when the Biden administration plans to officially align its climate policies with the global agreement. Although California is not waiting for federal policy to take effect. It has positioned itself for leadership in climate policy. Other states are beginning to implement different aspects of getting off of fossil fuels. New York State Comptroller Thomas DiNapoli announced that over the next five years, the state’s $226 billion employee pension fund would divest fossil fuel stocks and shares of other companies that do not meet the fund’s new target of net-zero greenhouse gas emissions by 2040. This is a huge win in the divestment space.