The Hills of Home

This video from Pentatonix was their big breakout back in 2013 right after Thanksgiving.  They're up there by Mt. Wilson in a forested notch sitting conspicuously on the mountain slopes above Altadena (Pasadena) in the San Gabriel mountains, USA. It's above the Eaton Canyon falls that run fast in the spring from the creek beside the trail. Watch the background in the video, you'll see the skyline of downtown LA, and beyond that, the Pacific ocean. They recorded this on a day with that gorgeous light playing through the clouds on a crisp winter afternoon in a dramatic sky.

It was shot before the drought took hold and seized our hills with its dusty grip of heated breath. Dried, brown vegetation covers the hills now even in December; the trees and shrubs are straggling across the hillocks. We don't see these clouds very often now, it's endless blue hazy sky, sometimes with remnants of smoke from the fires that have scorched the Southern California region for months. Blazing red sunsets from haze and pollution appear all summer and through the winter...

It's been our season of fires, of unrelenting winds from the deserts, and some researchers project that fires driven by Santa Ana winds, and the fires that occur earlier in the year in Southern California, will burn larger areas by midcentury in part due to rising temperatures. Our part in this horrific destruction is the encroaching urban hardscape and structures into areas that can't sustain it, that pave over and smother the very landscape that provides the necessary cycles of water and aquifer retention that we rely on. This, in addition to the warming planet, sets the scene for even worse destruction as well as massive deforestation from the die off of the forests in our mountain ranges. Climate change is now preventing the fall rains from tempering the natural fire cycle.

Climate scientists are sounding the alarm, the global climate changes predicted decades ago are accelerating far more rapidly than even they predicted. We may be facing a dramatic shift in to an uncontrollable climate change feedback from the increasing sensitivity of the planet due to this heat gain from carbon. Unless we can act rapidly, the verdant hills of our home will be gone very soon.

Update 12/26/17: Colorado River flow to decrease by 35 percent or more this century 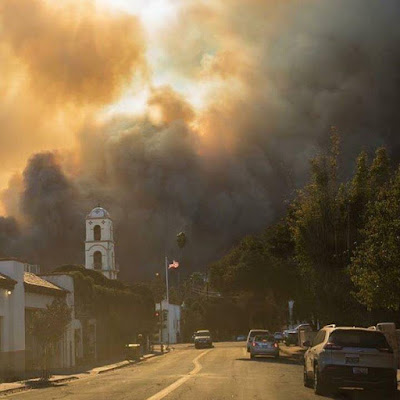 Our winter rainy season typically starts in November. But what we're experiencing now is a near total lack of rainfall, as well as the very severe late-season winds that are driving destructive fires all over the southern portion of the state. The photo above is from the city of Ojai which was surrounded by the massive Thomas fire starting in late November of this year. This biggest of a number of blazes currently burning in California has torched 270,000 acres, making it the state's third-largest since reliable record-keeping began in 1932. It has caused the evacuation of thousands of people across many coastal cities, and as of right now it's still not contained.

Traditionally this is the season for mudslides and flooding. Until now, no major wildfire has ever burned in California in December, at least since the state began keeping records in 1932. The five largest fires in California history have now occurred since 2000. They are driven by the Santa Ana winds that blow out of central California and the desert in the fall, especially now in our unusually dry December.

California Governor Jerry Brown warned about this in July, long before the October wine country wildfires, the most destructive in state history, and the current Southern California blazes that include the massive Thomas fire in Ventura.“Climate change is real,” he warned a state Senate committee.

Brown has been in the forefront of leadership on climate change in the US, having been involved with multiple global initiatives that have encompassed local government and industry leaders. Many climate change initiatives have started to coalesce in their respective countries, driven by agreements made at the Paris Accord.

In alliance with the Paris Accord of COP 21 in 2015, cities, states and companies in the US have made commitments to climate action at Climate Week in October of 2017 in New York City. There was the launch of the EV100 Alliance, a coalition of global companies, including Unilever, Ikea, DHL and others, that have committed to replacing their fleets with electric vehicles; and governors Andrew Cuomo of New York, Jerry Brown of California and Jay Inslee from Washington state announced the US Climate Alliance, a group of 14 states and Puerto Rico that are committed to meeting their share of the Paris Agreement, despite President Donald Trump's rejection of the pact.

At COP 23 this November, a coalition of United States governors, mayors and businesses led a separate, informal initiative to act in concert with the Paris Accord by establishing policies and practices that reduce emissions quickly enough to stem the worst impacts of climate change.

California (via Governor Brown - Global Covenant of Mayors) is a member of the new charter initiated in Paris in December 2017 at the One Planet Summit, which is expected to bring about new financing pledges by national governments, while launching initiatives to accelerate access to existing finance.The One Planet Charter builds on the Bonn-Fiji commitment at the COP23 international climate conference in November and sustainable procurement initiatives such as ICLEI's Global Lead City Network on Sustainable Procurement and the 100% Renewable Energy Cities & Regions Campaign, as well as C40 Cities’ Fossil Fuel Free Streets.

The fires that have consumed the state of California are a precursor for even more dangerous and violent climate changes that are disrupting our planet and our communities, inflicting damages that the reinsurance industry and financial bonds are not equipped to handle. There's no time to spare on getting a handle on these critical factors driven by the human emissions causing climate change, and California is necessarily leading the way.

Update 12/19/17: Late-season fires are the new normal in California.

Update 12/22/17:  One Planet Summit: an increasing number of creative initiatives for addressing climate change; and a growing sense of urgency.