Morning: After a fall rainstorm 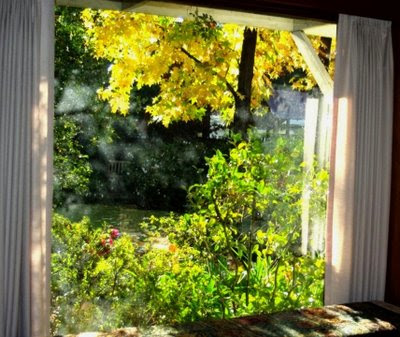 Even in Southern California there are delightful, crisp days when the sun comes pouring in the south windows to take off the chill. The trellis overhang allows the winter sun to come in, and in the hot summer it blooms with trumpet vine flowers to provide shade and keep out the heat.

The trees and plants temper the environment when they're planted strategically, and the fruit-bearing trees and shrubs (Pomegranite!) are drought tolerant, too. Nothing like the right kind of garden to spend the long summer afternoons in, watching our local wildlife darting around in the mulch and through the branches.

From the Gadget Lab at Wired: Antikythera 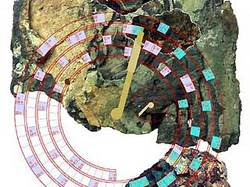 An ancient Greek computer comes back to life. A British museum curator has built a working replica of a 2,000-year-old Greek machine that has been called the world's first computer. Featured on the History Channel in December 2004, the complete reconstruction now also has further inscriptions replicated. A Conference was held on it in 2006 in Athens. See the article, a video and historical links here.History reaches to us in the present, in many forms. Just like the Intihuatana - the sun's hitching post at Machu Picchu - the brilliance of early cultures in understanding the cycles of the natural world led to astonishing constructs that expressed the nature of the physical world. This knowledge was used to harness a place and its resources to human purpose. Its purpose carried human meaning as well as consequences of use and its influence on the natural environment.

Is it possible in this era to now capture the intelligence that will allow humanity to inhabit the earth in balance? Can we take biomimicry to the next level in human affairs? Can we express our purpose so that it benefits all living things and embraces life instead of destroying it?

Update 12/7/16: Built by more than one person on the island of Rhodes, it shows that the ancient Greeks were apparently even further ahead in their astronomical understanding and mechanical know-how than we’d imagined.

Update 11/13/18:  While scientific study continues,  the discovery has drawn attention to both the existence of this ancient ‘calculator’ and its amazing history.

Update 1/27/19: In 1900, sponge divers stranded after a storm in the Mediterranean discovered an underwater statuary on the shoals of the Greek island Antikythera. It turned out to be the wreck of a ship more than 2,000 years old. During the subsequent salvage operation, divers recovered the remnants of a puzzling clocklike contraption with precision-cut gears, annotated with cryptic symbols that were corroded beyond recognition. For years, the device lay unnoticed in a museum drawer, until a British historian named Derek de Solla Price rediscovered it in the early 1950s and began the laborious process of reconstructing it — an effort that scholars have continued into the 21st century. We now know that the device was capable of predicting the behavior of the sun, the moon and five of the planets. The device was so advanced that it could even predict, with meaningful accuracy, solar or lunar eclipses that wouldn’t occur for decades.

Update 3/24/21: Scientists may have finally made a complete digital model for the Cosmos panel of a 2,000-year-old mechanical device called the Antikythera mechanism that's believed to be the world's first computer.
.
Posted by LPB at 9:52 PM
Newer Posts Older Posts Home
Subscribe to: Posts (Atom)