In these desperate, chaotic times of Trump's descent, I'm offering a moment of quiet respite so that we can briefly put down our burdens and regenerate in the intricate peace of Bach's music. This performance is an unusual, contemporary approach to the classic "Ave Maria".

For the moment, the less said about the regressive politics going on around us, as well as the ineffectualness of the global approaches to climate change, the better.

Hope for the future is a fragile thing, and its cultivation is the arrow pointing to a better world built by all of us.

"Although we are all born with intrinsic hope, it’s easy to forget. Because we usually focus on problems and difficulties, we can fail to appreciate the miracle of life and become blind to its potentials and possibilities. By concentrating on the negative, we don’t see the positive. By emphasizing what we lack and what we want, we ignore what we already have, and don’t consider what could be."

So this is a small opportunity to look over the view of the world ahead of us, and to ask of ourselves if we can sustain a vision of collaboration and abundant life; the emblematic female grace described by this hymn:

Hail Mary, full of grace, the Lord is with thee.
Blessed art thou among women,
and blessed is the fruit of thy womb, Jesus.
Holy Mary, Mother of God,
pray for us sinners,
now and in the hour of our death.
Amen.

Update 12/24/18: Let’s pretend that She is inviting (insisting?) that we weave ourselves into the mystery of existence and give up the illusion of our separation.

Update 12/25/18:  The Key Point that has been missed however is that the 'Hemiola' also gives rise to φ (Phi) & thus the subtly breathtaking 'dominance' of the 'Feminine Principle' or σοφία (sophia or 'wisdom')

Update 12/25/18:  The derivation of Phi in the feminine principle

A Tenth Year - A Rainstorm 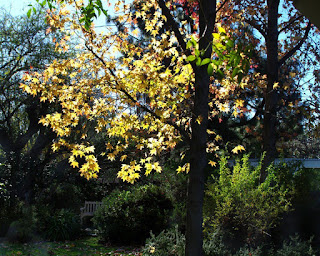 Los Angeles experienced a good storm last month, about two inches. But that was it. Nothing much in our forecast for December. Very much like the 2016 winter, in which California was still in drought, although that season eventually produced four inches above average later in the season. The Earth System Science Education Alliance has a page that shows how the precipitation and temperature changes have shifted over the last 100 years, with a warming trend as well as a much more variable precipitation profile that has a moving average of less rainfall.

Climate change has forced big changes in the way that water is used and conserved all over California. For example, at UC Santa Barbara, the use of recycled water for irrigation has drastically reduced potable water consumption. The campus utilizes treated water from Goleta Sanitary District and uses it for irrigation, rather than dumping it into the ocean. 90% of the campus landscape is irrigated with recycled water, which saves 19.5 million gallons of potable water annually. UCSB has also seen significant water use savings through efficiency improvements in the use of industrial water and restroom retrofits. UCSB is also exploring many other alternative ways to conserve the water that it gets from local rainfall, which is reliant upon the Lake Cachuma supply, rather than the State Water Project which imports water from the Bay Delta.

Compare these efforts to some of the residential areas in adjacent Montecito, which have in the past resorted to trucking in water to keep the massive lawns and plantings from dying due to the lack of rainfall in the area. However, the storm in January of this year damaged the Montecito water distribution, as well as destroyed much of the landscaping and some structures with the devastating mudflows. Much of the water supply infrastructure will need to be reconstructed, as well as establishing reliable new water supply going forward. This storm produced destructive mudflows because of the earlier Thomas Fire burn in 2017.  The recovery from the damage to the infrastructure will take most of 2018. This has led to a dialogue with neighboring Santa Barbara, and involves purchasing water from their desalination plant, which was reactivated in 2015. This plant currently provides about 30 percent of Santa Barbara's annual potable water demand since being started up again in 2017.

The complexity of climate change impacts is proving to be a major challenge all over the state, inasmuch as this major damage occurred in a wealthy area which will be able to recover from the extensive destruction that took place. It exemplifies the scale of damages that is starting to impact all of California's cities, as well as the expenses and logistics of preparing for a very dry future which is our new normal.

Update 12/17/18: Sierra Nevada snowpack on track to shrink up to 79% by the end of the century, new study finds

Update 12/18/18:  Experts say the state must take a new approach to managing water in the future.