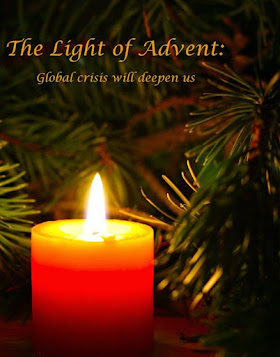 Advent is a time of reflection, remorse, and the preparation to move into a necessary future. As our world increasingly faces extreme climate events, we've got to cut emissions drastically within the next few years in order to keep from experiencing the worst impacts of our continuing carbon emissions.

The biggest disappointment people have after COP26 in Glasgow is that it kept the world on track to blow past 1.5 and possibly even two degrees Celsius of warming, which is not what the Paris Agreement calls for. Given that we are now experiencing environmental collapse at 1C, the future appears dire, and demands increasingly strong countermeasures of resilience. These measures have been published by Ed Mazria FAIA, forty years ago, and was the beginning of the effort to bring the strategies to the construction industry. He has worked with the American Institute of Architecture to move the industry into the forefront of policies and recommendations necessary to forestall the impacts of climate change.

David Attenborough's opening speech at COP26 Glasgow was a clear challenge to the COP26 participants and delegates. He poignantly describes the unraveling processes that are causing destructive climate change. At a 60 minutes interview with Attenborough in 2020, he states: "Our generation has failed. We've allowed climate change to happen".

The UNFCCC provides a review of the processes at COP26 on their website. "A top priority for the UK Presidency and many countries was to finalise the ‘Paris Rulebook’ to fully operationalise the Paris Agreement. The Paris Rulebook sets out the detailed rules and systems to underpin delivery of the Paris Agreement, many of which were agreed at COP24in Poland. However, there were several issues where Parties held such strongly held different views that they had been unable to agree on these at previous COPs."

The Sierra Club has published "Prove Us Wrong": A Roundup of Some of the Best Speeches at COP26.

The Los Angeles Times presented a different view in their editorial. "The Glasgow climate summit brought only incremental progress." The London Greenleft was far more pessimistic about the summit on their blog:

"We saw an insurmountable contradiction and a source of chaos when China and the United States issued a joint statement at the COP. It will be of no use in breaking the deadlock. It is mainly a statement for the sake of appearances. The two great powers have an interest in posing together as the guarantors of the world’s stability and its climate. Perhaps they will try to collaborate on a partial aspect of climate policy (methane emissions?). But the underlying tensions are very strong and tend to deepen the conflicts. In the US, the Democratic majority is hanging by a thread with senior US Senator Joe Manchin (D) being the loyal friend of coal."

"The failure at Glasgow and what needs to happen next", by Peter Kalmus. Peter is a climate scientist at NASA's JPL in Pasadena and the author of “Being the Change: Live Well and Spark a Climate Revolution.” And this from Greenpeace -“Scientists have found that governments’ current action plans would cause global temperatures to increase to 2.4 C, which would bring absolute devastation to hundreds of millions of people and ecosystems around the world,” Jennifer Morgan, the executive director of Greenpeace International, said in an interview at COP26. “So waiting five years to come back to the table is not an option.”

Climate activist Vanessa Nakate of Uganda had this to say near the end of the sessions: "One of the deepest disappointments for the climate-justice movement was the almost total failure to deal with fossil fuels. Negotiators had flirted with confronting the fossil fuel industry head-on — a key issue previous COPs had dodged — only to back off at the last minute. Whereas an early draft had straightforwardly called for a phaseout of coal power and fuel subsidies, the final version suggested only a phasedown of “unabated coal power and inefficient fossil fuel subsidies,” draining the statement of any meaning.

The many voices did not come to a resolution, but the hope is that next year's COP27 will develop some definitive positions.