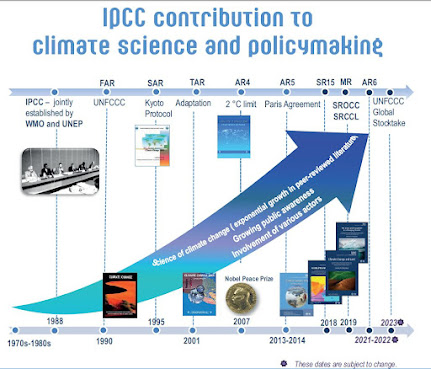 Code Red means that we have an extreme climate emergency all over the planet. This has now been verified with science inputs comprising the latest UN report on the state of climate change and its impacts.

The Intergovernmental Panel on Climate Change (IPCC) is the UN body for assessing the science related to climate change. It was set up in 1988 by the World Meteorological Organization and United Nations Environment Programme to provide policymakers with regular assessments of the scientific basis of climate change, its impacts and future risks, and options for adaptation and mitigation.

The IPCC does not conduct its own research. It identifies where there is agreement in the scientific community, where there are differences of opinion and where further research is needed. It is a partnership between scientists and policymakers and it is this that makes its work a credible source of information for policymakers. IPCC assessments are produced according to procedures that ensure integrity, in line with the IPCC’s overarching principles of objectivity, openness and transparency. IPCC reports are policy-relevant, but not policy-prescriptive.

The Sixth Assessment is now released, and the UN calls the IPCC issues ‘bleakest warning yet’ on the impacts of climate breakdown. It's Code Red for human driven global heating, warns the UN chief. The New Climate Change Report has come out with far more detail than previously laid out, because there's no avoiding the obvious current disintegration of the climate and our environment. It's ultimately the problem identification that we require to take immediate action to mitigate the most drastic impacts of our degraded planet.

The Guardian, a UK news site, has issued many articles on the alarming trends that are now being documented. Their summary of the IPCC climate change report and its significance is comprehensive, as well as bleak when it comes to the sheer urgency of addressing the massive build up of carbon in our ecosystem. The report noted that each additional fraction of warming had serious implications for life on Earth. The report laid out 127 of these threats, including the growing loss of usable farmland and increasing drought, which will threaten the global food supply, rising sea levels and floods, which are already driving tens of thousand of people from their homes, growing numbers of punishing deadly heat waves, and increasing extinction of plant and animal species.

The world faces unavoidable multiple climate hazards over the next two decades with global warming of 1.5°C (2.7°F). Even temporarily exceeding this warming level will result in additional severe impacts, some of which will be irreversible. Risks for society will increase, including to infrastructure and low-lying coastal settlements. This report has highlighted the extreme urgency with which fossil fuel must be brought to zero emissions; the current deadline is dated approximately by 2030 to preserve the natural world and its processes.

It doesn't appear at this time that humans can make the 1.5C limit due to the disinformation propagated by the fossil fuel industry that has fatally slowed down human climate action.