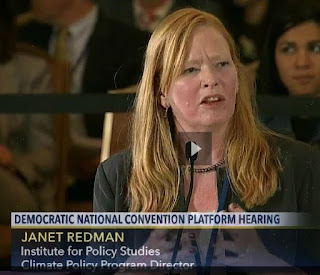 The Democratic National Committee is holding a series of hearings around the country this summer to collect input for the Democratic Party platform. In a joint statement on Friday June 3, DNC Chairwoman Debbie Wasserman Schultz and Maryland Rep. Elijah Cummings, chairman of the Platform Drafting Committee for the Democratic National Convention in Philadelphia, announced hearings in Washington, Phoenix, St. Louis and Orlando, Florida, in early June and early July. The goal of the public hearings, the two Democrats said, is to solicit input from policy experts and regular Democrats. These hearings are being broadcast on C-Span, both on cable access and web streaming.

Janet Redman directs the Climate Policy Program at the Institute for Policy Studies. She testified at the DNC Platform Committee Hearing on June 9 in Washington, D.C. for a non-military response to the potentially catastrophic security risk posed by climate change. Her conclusion is as follows:

"The security risks posed by climate change to the United States and global populations are real, imminent and potentially catastrophic. The most critical responses to the curb the threat global warming poses to the American public and global stability are non-military. We must reduce our greenhouse gas emissions at home and support a just transition to clean energy, climate resilient economies in developing countries.

Finding the innovative ways to pay for it could be part and parcel of strengthening our economy. In addition to a progressive carbon tax, two options stand out. First,some of the revenue of a Wall Street speculation tax (also known as a financial transaction tax) could be used to support climate action. Second, military spending on outdated or obsolete weapons and programs could be redirected to program combating climate change abroad. Currently, U.S. spending is skewed 30:1 in favor of military over climate security (our nearest “peer competitor” spends 1.2:1).To confront the global threat risk that climate change poses, we have to take a holistic approach to security spending."

The full transcript is here.