Growth at All Cost 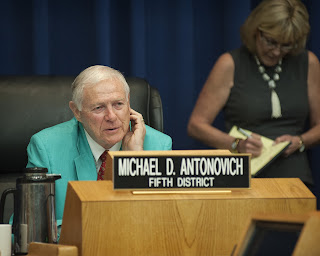 The growth model that's imperiling our planet with climate change impacts has not only continued unabated, but is also endangering our body of law and policy.

The Southern California Association of Governments' 2008 Regional Comprehensive Plan that is supposed to be our regional blueprint takes its cue on climate change from the IPCC, the UN body that is setting global policy: "The body of scientific evidence shows that our global climate is heating up at unprecedented rates that threaten life as we know it (Source: Intergovernmental Panel on Climate Change, Climate Change 2007:Synthesis Report, November 2007). The vast Southern California region has contributed to the highest CO2 emissions levels in recorded history. This threatens to impact all aspects of our communities, whether it’s reducedwater supplies, habitat loss, increased air pollution,or public health impacts. The secondary effects of climate change are almost as troubling; for example, hotter cities need more cooling, which increases power plant usage that contributes further to the vicious cycle."

Note: this cited source is now the IPCC AR5 report, issued in 2015, which is even more emphatic about the climate change impacts of carbon emissions. A special report in April of this year is becoming urgent about the absolute necessity to reverse the impacts human development on the planet.

Yet the growth mantra continues unabated in the Southern California region despite policies that recognize the historic impact of uncontrolled expansion and development. For example, Los Angeles County has allowed expansion of suburban development in its unincorporated areas with only an eye towards profit, even in supposedly protected natural areas. Development in the Santa Monica Mountains has been spurred by the LA County Supervisors for decades, putting the natural terrain in peril. In most cases, the developers who benefited from the extra homes had contributed to the campaign coffers of Mike Antonovich...In all, Antonovich's campaigns received $225,000 from those seeking to exceed mountain growth limits.

In the outlying county areas, the developments are even being allowed to go forward inasmuch as there's no water or infrastructure to support the construction of housing and commercial areas. Antonivich has even proposed allowing development to use hauled-in water that deeply concerns environmentalists. Damon Nagami, a senior attorney at the Natural Resources Defense Council, said he worried the proposal would “open the door to urban sprawl in areas with extreme water scarcity.” Supervisor Antonovich has gone so far as to introduce the Hauled Water proposal at the September 4, 2012 Board meeting.

These efforts to unravel the regional policies established at the SCAG level in favor of a few pockebooks is the kind of patronage that has no place in a region that is fighting for survival as the ongoing drought and water scarcity threaten even the existing fabric of developed tracts and urban areas. It's time for a new era of conservation, cooperation and marshalling of resources that restores our environmental legacy and provides new measures of urban existence that contain the boundaries of development and consumption in a sustainable way.

Update 8/5/16: Hostile takeover of the SCAQMD as a gift to the Ports of LA