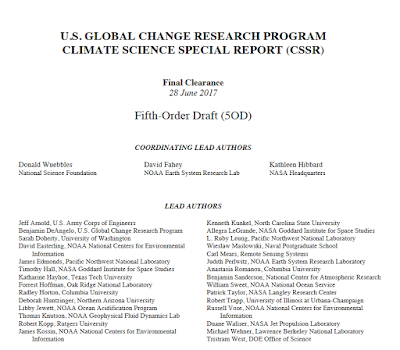 California and the Brown administration are fighting the anti-science demagoguery coming out of the White House, and now there is deep concern that it is also trying to cover up a federal climate change report. This draft federal report can be found online.

This draft report was obtained by the nonprofit Internet Archive in January and recently published on the New York Times site. Its authors note that thousands of studies, conducted by tens of thousands of scientists, have documented climate changes on land and in the air. “Many lines of evidence demonstrate that human activities, especially emissions of greenhouse (heat-trapping) gases, are primarily responsible for recent observed climate change,” they wrote.

The report was completed this year and is a special science section of the National Climate Assessment, which is congressionally mandated every four years. The National Academy of Sciences has signed off on the draft report, and the authors are awaiting permission from the Trump administration to release it.

The impacts in California alone are considerable, as the report outlines. Atmospheric rivers that bring extreme precipitation to the West Coast, like the ones last winter that ended California’s drought, are projected to increase in frequency, but will fall more as rain than snow, the report says. That would disrupt California’s highly engineered plumbing system, which relies on the Sierra snowpack to store water for the dry summers. Forest fires have already increased sharply in the West, the report says, and will increase more as the region continues to dry, bringing major ecosystem changes.

A Los Angeles Times editorial raises the issues about climate change risks, which has apparently been leaked by scientists working at the federal level. Their message: anthropogenic climate change is real and happening fast.The changes are already real and the future risks potentially catastrophic. The whole world knows it, and the vast majority of the world is trying to address it. That Trump is not, and that government scientists feel the need to join “deep state” actors in leaking their findings in fear of what the president might do against the nation’s best interests, is damning.

The White House is now reviewing this new report that finds a strong link between climate change and human activity. Scientists are reportedly worried that Trump will suppress this new federal climate report.

Update 8/20/17:  Response ~ The Trump administration has decided to disband the federal advisory panel for the National Climate Assessment, a group aimed at helping policymakers and private-sector officials incorporate the government’s climate analysis into long-term planning.

Update 10/3/17: The significant scale of human impact on our planet has changed the course of Earth history per a report from the University of Leicester 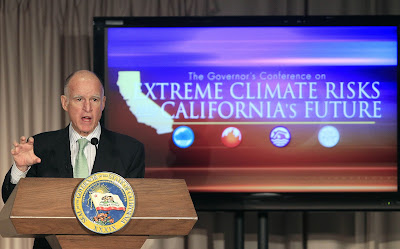 The state of California has been in the forefront of climate action and the formation of interstate agreements since 2008. By 2013, it had formalized a pact by the Pacific Coast Collaborative that addressed climate change trade policy.  This unprecedented pact between the governors of California, Oregon, and Washington, and the premier of British Columbia had been signed with the intent of forging a clean energy future. Jerry Brown compared California to a lever and quoted a Greek mathematician: “Archimedes said, if you give me a place to stand ... I can move the earth.” Since California has established its place at the forefront of U.S. environmental policies, California has become ready to play a key role in resisting Washington’s hard right turn. It is also a part of the Western Climate Initiative, established during the Obama administration tenure.

Thus the state has become the chief advocate of resistance in the face of the Trump administration's abdication of leadership in global policy on climate change. For the past two years, California Gov. Jerry Brown has been aggressively recruiting other state and local governments to sign on to their own, sub-national climate pact. In early July of this year, as Trump and other world leaders gathered in Hamburg, Germany, for the G20 summit, Gov. Jerry Brown made waves by telling the world that Trump — who has decided to withdraw the United States from the 2015 Paris climate accord — does not speak for most Americans when it comes to dealing with environmental concerns.

At the G20 summit, Brown announced that California would host a global summit on climate change in San Francisco in September of 2018. “All over the world, momentum is building to deal seriously with climate change,” Brown said in a statement. “Despite rejection in Washington, California is all in. We are fully committed to the Under2 Coalition and the Paris Agreement.” The California summit meeting will bring together the leaders of states, cities, businesses and others who made pledges to curb heat-trapping greenhouse gas emissions as part of the Paris accord and the thousands of others who were galvanized by Mr. Trump’s decision. Days after his announcement, the former New York City Mayor Michael Bloomberg published a letter to the United Nations signed by more than 1,200 mayors, business leaders, university presidents and others declaring “we are still in” the climate deal. The website for the Global Climate Action Summit 2018 is now online.

A week later, Jerry Brown and Michael Bloomberg announced America’s Pledge climate initiative, a national program of state and local participation in climate policy.  This initiative includes an unprecedented number of U.S. states, cities, businesses, and colleges and universities that have reaffirmed their support for the Paris Agreement through collaborations including the “We Are Still In” declaration, the Climate Mayors coalition of cities, the US Climate Alliance group of states, and others. This is now online and contains the declaration that:

“Today we’re sending a clear message to the world that America’s states, cities and businesses are moving forward with our country’s commitments under the Paris Agreement — with or without Washington,” said Governor Jerry Brown, who was recently named Special Advisor for States and Regions ahead of the United Nations’ 23rd Conference of the Parties to the Framework Convention on Climate Change (COP23).