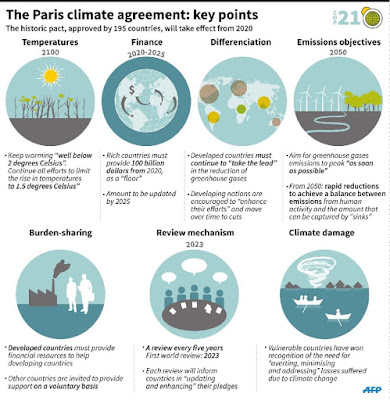 On January 29, 2016 at IEA Headquarters, Paris, a Big IdEAs panel was held to discuss “Towards decarbonising the global economy: the direction of travel after COP21”. Sir David King is the permanent UK Special Representative for Climate Change and was the Government’s Chief Scientific Advisor from 2000 to 2007, during which time he raised awareness of the need for governments to act on climate change and was instrumental in creating the Energy Technologies Institute. He made his presentation on this panel based using the established Key Points developed at COP21 (graphic above). The video of the presentation is here.

Sir King also discussed a risk assessment he conducted for climate change impacts undertaken with China, USA, Britain and India. Each country posed its worst case scenario, and the analysis is that risks go way beyond the impacts assumed in earlier analyses; they increase exponentially as the temperature goes up. The risk assessment was informed by a series of meetings, held at Harvard University in Cambridge, Massachusetts in November 2014; Tsinghua University in Beijing in January 2015; the Council on Energy, Environment and Water in Delhi in March 2015; and Lancaster House in London in April 2015. These were attended by experts in energy policy, climate science, technology, finance, international security, politics and economics.

He also noted that "A new low-carbon sector is emerging. The fastest-growing sector in our economy outside of the service sector is the new low-carbon sector. The new clean energy sector is going to 30 percent in the last 3 years." He is one of the authors of a white paper, "A Global Apollo Programme To Combat Climate Change". It has subsequently become a Mission Innovation in Paris, led by Obama, Modi, Hollande and Cameron. They have gotten David Attenborough involved with the Apollo Program and its forward mission to rapidly implement clean power systems. A Breakthrough Energy Coalition, organized by Bill Gates, announced contributions of up to $20bn venture capital total over the next 10 years to spin out potential markets facing clean energy solutions. This is targeted for June 16, 2016 implementation because of a meeting for clean energy development at that time in San Francisco, California.

Sir King supported his conclusions with an analysis of the problem under the Contraction and Convergence framework. Further examination and comparison of the numbers offered in Paris clearly shows that the countries and the corporations of the world are responsible for the planet heading for catastrophic climate change if they don't make realistic commitments to bring carbon emissions to zero almost immediately.

The problem right now is that the pledges made by countries ahead of the COP21 talks on how they would reduce their emissions “do not add up to 2 degrees,” said Christina Figueres, executive secretary of the UN Framework Convention on Climate Change (UNFCCC).

Update 3/9/16: It will take at least three decades to completely leave behind fossil fuels. But we can do it. And the first step is to start with the easy stuff.

Update 4/24/16: Carbon pricing under discussion by the World Bank and IMF