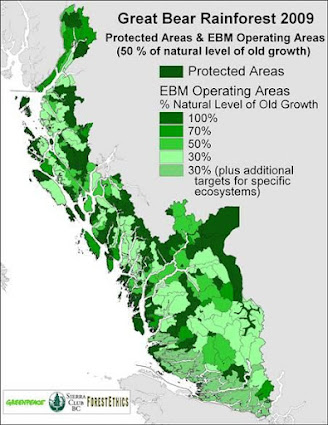 The climate-related conservation and resilience policies of many wealthy countries are beginning to emerge. As part of their 2016 Royal Tour, their Royal Highnesses the Duke and Duchess of Cambridge officially endorsed Canada's Great Bear Rainforest under the Queen’s Commonwealth Canopy initiative. This initiative is the environmental protection of natural resources across the globe that are made up of countries that are part of the British Commonwealth.

This park encompasses the world’s largest intact coastal temperate rainforest. This unique rainforest has old-growth trees over 800 years old. The Kitlope valley is an important habitat for marbled murrelets, bald eagles, moose, grizzly, black bear, wolf and waterfowl. The Kitlope valley lies within the traditional territory of the Haisla First Nation, based out of Kitamaat Village. It was established in Canada on February 20, 1996, as part of a commitment to reconciliation with Indigenous peoples, operated via the Kitlope Heritage Conservancy.

Back in 1791-1795, the Vancouver Expedition explored Canada's western coast under the auspices of the British Royal Navy. In 1793, the explorer Mr. Whidbey discovered the Gardner inlet, and in a verbal description of the shoreline, described it as "a barren waste" that was "nearly destitute of wood and verdure", with only the solid granite mountains in view. Which means that the young trees were not there. Possibly in the intervening 200 years, the temperatures warmed enough that the trees grew rapidly from seed further inland and established a toehold on the steep granite slopes. This item was taken from "British Columbia Coast Names 1592-1906", a very interesting book loaded with excerpts from old manuscripts. (This could be the source of fossil-fuel pushback on climate change using the proliferation of pine forests to show that northern latitudes will benefit from global warming?) 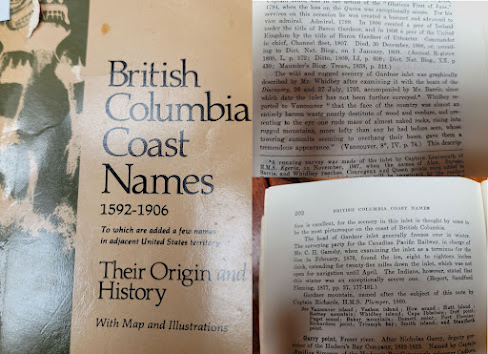 I spent a week in the park last month, with a trip into Kitlope aboard a sailing ship. It's a stunning ecology with incredible snowcapped granite mountains covered in forests. There's nothing else like it, the wildlife is abundant in the clear, cold waters and the myriad waterfalls. It reminded me of the Norwegian fijords; there are a few scattered aging structures near the water's edge, without many habitable areas since there's no longer access to these areas except by boat. An account and photos of this experience by Valeria Vergara was published in June of this year. She points out that "in 2020, Raincoast, working closely with First Nations partners, secured the 5300 km2 Kitlope commercial hunting tenure in the Haisla and Xenaksiala homeland. This is part of a bold move initiated in 2005 to end commercial trophy hunting of bears, wolves and other coastal carnivores for entertainment and profit, and to help respect the stewardship of First Nation communities that view trophy hunting as profoundly inconsistent with their teachings and values."

Earlier, in 2015, "as old-growth forest remains an indeterminate definition in forestry regulation, forest companies have arguably continued to log old-growth according to arbitrary discretion. Deforestation, road construction and other operations have changed the local ecological landscape, altering wildlife habitat and affecting the livelihood of local communities. As a result, First Nations, united with environmentalists and NGOs, have been aggressively advocating for forest sustainability while calling governments to determine clearer objectives and improve logging practices." The map above shows how the various areas of the forest are laid out with restrictions on commercial activity as a result of environmental regulations, along with an extensive discussion of the adopted management strategy.

It's critical for Canada to protect the biodiversity and pristine wilderness that still exists and to push back against several hundred years of exploitation of resources in this forest. By the late 1990's, ancient trees from this forest were being logged to make household items. The eventual agreement between  the First Nations, the forest industry, the government of British Columbia, and partner environmental groups announced a groundbreaking agreement to permanently protect 85% of the forests of the Great Bear from industrial logging in 2016.

This includes the existing Kitasoo Hydropower Project that services the Kitasoo-Xai’xais First Nation community of Klemtu in the heart of the Great Bear Rainforest.  Upgrades to existing infrastructure, including active storage at Baron Lake, will allow for greater power output from the facility. This project is a heavily greenwashed upgrade that will transition the plant off of diesel fuel. Further detail from coastal First Nations involves a $4.6 million contribution from BC’s Renewable Energy for Remote Communities program is funding the upgrade that will reduce carbon emissions by an estimated 11,160 tonnes over the facility’s operating life. "The Kitasoo hydroelectric facility – 100 per cent owned by the Nation – has supplied clean power to Klemtu for 40 years, helping it transition from a dependency on dirty diesel fuel. The planned upgrade is the latest step in the Kitasoo/Xai’xais efforts over the past four decades to build energy sovereignty and support community growth." A detailed examination of how this pact resulted from the “War in the Woods” includes a period that saw some of the largest environmental protests in Canada’s history: "What began in the early 1990s as a large-scale mobilization to protect the Clayoquot Sound region of Vancouver morphed into a movement to save all of the Central and North Coast forests of British Columbia, dubbed the “Great Bear Rainforest” in 1997 by environmentalists."

In the article, "The Great Bear loophole: why old growth is still logged in B.C.’s iconic protected rainforest", Jody Holmes, a biologist and project director with the Rainforest Solutions Project, spent years negotiating with the provincial government, forest companies, First Nations and others to help put in place new conservation areas and a different type of logging in the region. She says it is no accident that the iconic tree of the coastal temperate rainforest continues to be targeted.The 2016 agreement, Holmes now laments, “opened up an enormous loophole” that allowed the logging companies “to harvest every last stick of big, older trees,” while simultaneously claiming that they were meeting their conservation targets. “We’ve been pushing back on that for four years with the industry to absolutely no avail. In fact, they are fighting us tooth and claw on this one,” Holmes said. Other aspects of the Great Bear Rainforest agreement have opened up additional loopholes.The biggest of those are allowances that grant companies permission to build roads through nominally protected old-growth forests.