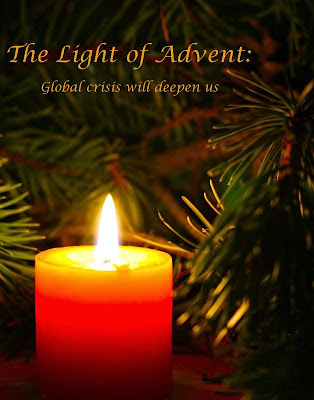 It's time now to prepare for and remember the year-ago promise of Advent with the knowing that forces are coalescing around the globe and in the US which are countermanding the denial and obstruction we see at the highest levels of global climate interaction. Groundwork has been laid, players identified, and industries have begun mobilization.

A year ago, John Kerry, the former senator and secretary of state, formed a new bipartisan coalition of world leaders, military brass and Hollywood celebrities to push for public action to combat climate change.The name, World War Zero, is supposed to evoke both the national security threat posed by the earth’s warming and the type of wartime mobilization that Mr. Kerry argued would be needed to stop the rise in carbon emissions before 2050. The star-studded group is supposed to win over those skeptical of the policies that would be needed to accomplish that. Now, under the nascent Biden administration cabinet, these policies are stirring to life with the appointment of Kerry as special presidential envoy for climate.

This clears the way for the US to rejoin the Paris Agreement of COP21 and establish leadership on building a future of zero carbon with the worldwide community of nations. The number of commitments to reach net zero emissions has doubled in less than a year, with many in the Race to Zero by 2050. According to a report by the Data-Driven EnviroLab and the NewClimate Institute, published during Climate Week NYC, that includes cities and regions covering more than the combined GDP of Japan, India and the UK, and companies with a combined revenue of over $11.4 trillion (equivalent to more than half of the US GDP). This shows that climate action has continued unimpeded by Covid-19. This joins with work in place and underway by the private foundations of Michael Bloomberg, Al Gore and Bill Gates, among many others, that have been focused on seeding efforts to implement carbon neutrality in time to avoid the worst of the impacts of climate change, which is set at a maximum of 1.5C by the Paris Agreement.

The architecture profession, along with the construction industry in the US, has risen to the challenge of implementing the requirements of carbon net zero in its construction practices. The American Institute of Architects (AIA), in concert with Architecture 2030, has incorporated tools and strategies for the industry to begin moving ahead with immediate carbon reduction in its construction materials and practices as well as significant carbon sequestration. The basis for this work is the 2017 Fourth National Climate Assessment (NCA4), Volume I, a comprehensive, multi-year scientific analysis under the auspices of the National Oceanic and Atmospheric Administration (NOAA). Very specifically, this work done by the AIA involves the evolution of its Committee on the Environment (COTE) into an overarching Framework for Design Excellence which guides the design and construction of resilient and carbon neutral projects. This goes beyond the operational carbon reduction used by the US Green Building criteria (LEED) and encompasses embodied carbon as well as water re-use and building electrification. The site and its landscaping are also contributors to carbon absorption. 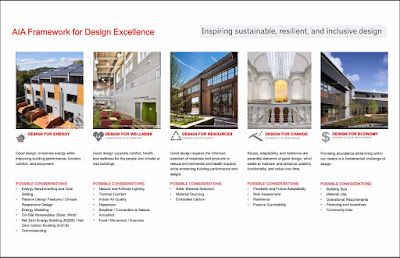 The goals are that these strategies, as well as a calculation for embodied carbon in a project will bring the construction industry into closer compliance with global carbon emissions requirements. The EC3 tool is the first free tool that allows for supply chain specific analysis of embodied carbon data, utilizing the first searchable and sortable database of all United States and Canadian Environmental Product Declarations for concrete, steel, wood, glass, aluminum, insulation, gypsum, carpet and ceiling tiles.

Because the building sector is currently responsible for 39% of global energy related carbon emissions: 28% from operational emissions, from energy needed to heat, cool and power them, and the remaining 11% from materials and construction, the World Green Building Council has a call to action with the new requirements:

So we embark on a new course together with the world community to put actual practices in place for the reduction of carbon emissions to zero and a new sensibility for the value of the natural world no longer at the mercy of GDP economics.