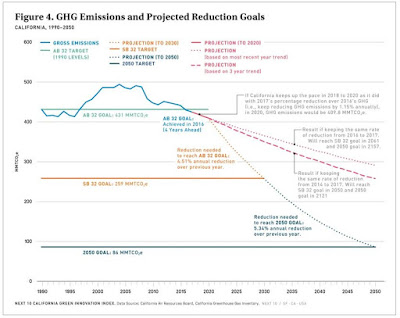 California is the home of sprawl, thanks to the way the western US was acquired and developed for profit by the corporate railroads back in the early 1900's by the Huntingtons, among others. The local Los Angeles Red Cars were a loss-leader designed to sell real estate for development in the entire Los Angeles basin. The resulting evolution of the freeway grid during the postwar era, which developed along the earlier rail structure, made the region car-centric, and now development threatens to overwhelm the region with traffic. So far, Transit Oriented Design (TOD) that overlays the old rail right-of-ways for a growing light rail system is proving problematic. The system is still developing, and the attempt to use TOD hasn't worked out the way it was envisioned. A large part of the problem is that the development around these transit nodes has resulted in market rate housing which doesn't solve the problems of affordable housing or a reduction in the use of automobiles.

The "fix" that emerged with the subsequent light rail system planning is an acceleration of the rail extension plan to create a wide-flung system of transit that will integrate the region by 2030. It's an attempt to align transit with the existing dense urban land use, which is the reverse of the way that many of the older, east coast cities evolved. Other models of a more hybrid strategy is beginning to emerge with respect to land planning and development, with planning occuring at a more regional level that creates logical transitways within existing centers of subregional density. The linked-nodes strategy works if the centers of transit are directly aligned and permanently linked.

Enter the era of seriously addressing climate change on top of these already dense urban areas which are increasingly spewing greenhouse gasses, the challenge of a lifetime. A California think tank, Next10, has established emissions goals and practices for 2030 that require drastic changes to transit strategies. The new goals Next10 are pointing to call for cutting greenhouse gases another 40 percent over the next 10 years en route to an 80 percent reduction by 2050. And with the transportation sector belching out more than 40 percent of the state’s emissions, the hard work is still ahead:

“Almost all of the success has been in the electricity sector, and almost all of the low hanging fruit is gone,” said Danny Cullenward, policy director at climate change think tank Near Zero. “Meanwhile, the transportation sector is going in the wrong direction.” Still, they won’t be enough to staunch the flow of greenhouse gases from tailpipes, which  Nichols said in 2018 will require a “deep transformation. And changing California’s car culture — that transformation Nichols wants — is widely believed to be a significant challenge on its own. Add to that the state’s battle with federal regulators to manage its own clean-car rules and the goal becomes even more difficult.

When the federal Environmental Protection Agency last month yanked California’s special authority to set its own tailpipe emission standards, officials said they would take the fight to court. “There’s just no way we can reach our goal unless we are able to move forward with that waiver and the provisions that it allows us,” California Gov. Gavin Newsom said at an environmental summit.

And compare the California goals with what's occurring at the Federal level under the wayward Trump administration. The US government is now retreating into a retrograde expansion of emissions which makes meeting the goals extremely difficult. How this will resolve the battle will depend upon the politics of the country as they play out over the next year. 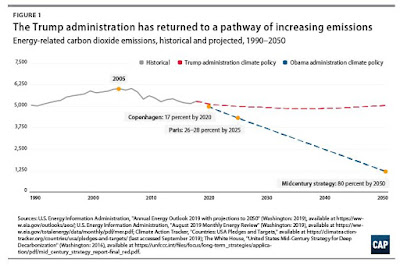 Posted by LPB at 1:00 AM Links to this post
Newer Posts Older Posts Home
Subscribe to: Posts (Atom)