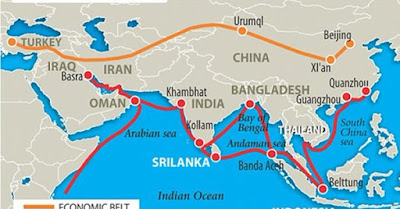 Architect's Newspaper Sept. 2019: "For this year’s international practice issue we looked at China’s massive Belt and Road Initiative (BRI), the trillion-dollar project aimed at tying the world to Beijing, and slavery’s role in the global construction industry. The Belt and Road initiative set up by Xi Jinping in 2013 includes hundreds of infrastructure projects financed or constructed in part or in whole by Chinese entities far beyond its borders. "Belt" refers to roads and railways, while "roads" refers to sea lanes, all of which unifies almost the entirely of Asia and Africa. The number and physical size of these infrastructure projects promises to remake urban landscapes - alter, and destroy - natural landscapes and consume untold millions of tons of natural resources, building materials and fossil fuels. The BRI is as much a geopolitcal experiment as it is an economic development strategy."

And it is definitely NOT a "green vision".  An analysis shows that China's BRI is loaded with coal power.

China is by far the biggest player in Asia, having supplied or pledged $36 billion for coal plants in 23 countries, according to the IEEFA. The Chinese government has provided financing from state-run banks and included many of the projects in its colossal Belt and Road Initiative, which is designed to expand Beijing’s influence through investments in strategic foreign infrastructure projects.

China has modernized their one-party dictatorship with market oriented reforms, i.e., its own version of authoritarian capitalism since Deng Xiaoping's rise to power after Mao's Cultural Revolution.His violent suppression of society and the government resulted in primarily military and police state power. This has led to an economic expansion and more wealth for a few Chinese connected to the right party officials and the Bank of China. It's this monolithic structure that Xi Jinping has inherited and continues to expand using economic levers in many countries with BRI as its mechanism.

A new study uncovers China's massive hidden lending to poor countries. Over 50 developing countries' Chinese debt accounts for on average 15 percent of their individual GDP. An example of their methodology is the way China isolates Taiwan with projects in poorer countries; the price of the development is breaking official ties with Taiwan. In this manner, China magnifies its influence over Taiwan without a direct confrontation with the US, which continues to sell weapons to Taipei. Beijing is withholding the $4.9 billion needed to finish the road project in Kenya, once a flagship for Xi Jinping’s Belt and Road initiative. But with concerns rising globally that BRI was loading poorer nations with unsustainable debt, Xi signaled in April that Beijing would exert more control over projects and tighten oversight. Chinese influence in Myanmar is growing. One of China’s biggest projects is the construction of a deep-sea port on the coast of Rakhine State. China’s ambitions for Myanmar also feature oil and gas pipelines to feed its insatiable energy needs. One of the pipelines cuts right through Rakhine State—suggesting an incentive for the Burmese military’s aggressiveness against the people living there. In Belarus, activists are protesting the massive industrial park development, the Great Stone Industrial Park outside Minsk. To quote one activist, "America and Europe won't give money for dirty factories like this, but China doesn't care and wants business for Chinese companies."

Earlier in 2018, the New York Times did an extensive examination of this topic: "We examined nearly 600 projects that China helped finance in the last decade, through billions of dollars in grants, loans and investments. Taken together, they show the scope and motivation of China’s strategy.41 pipelines and other oil and gas infrastructure help China secure valuable resources. We found 112 countries where China has financed projects. While most fall under its infrastructure plan known as the Belt and Road Initiative, Beijing has pushed beyond those boundaries.South Africa turned to China for $1.5 billion for a coal-fired power plant. It is one of at least 63 such plants financed by China around the world, which collectively pollute more than Spain." The Times has recently produced a longer investigation of projects in Kazakhstan, in an inaccessible area on the steppes of Central Asia, "The Trillion Dollar Nowhere".

It's not too late to "green" that Belt and Road project. A couple of years ago, China even issued its own $2.15 billion Green Climate Bond to finance renewables and energy efficiency. But when it comes to that Belt and Road Initiative, China is not big enough. Although the Party centralized authority in Xi Jinping’s hands, those infrastructure projects come from a variety of sources in China, including different government agencies, provinces competing with each other, and the business sector. It’s hard enough for the Chinese state, even with a new and more powerful Ministry of Ecology and Environment and a cadre of environmental police officers, to impose stringent standards within the country. More to the point, China has shown little interest or capacity when it comes to imposing them outside its borders.

While the Chinese initiative initially received an overwhelmingly positive reception, since mid-2017 the democratic Quad—Australia, India, Japan, and the U.S.—and several European countries have begun to signal major reservations about the BRI. A new multi-country survey found that there is little public support for coal projects in key countries for China's ambitious BRI, knowing that country's penchant for leveraging its investments into control, such as has been experienced lately with Hong Kong.

There is rightful international concern about the agenda behind China's development push, particularly since it imposes its own culture and only honors contracts it sees fit. However, some scholars counter that there is no evidence that China’s plan is to entrap developing countries. Deborah Brautigam, director of the Africa-China Research Initiative at Johns Hopkins University, said the Sri Lanka port is the only one out of more than 3,000 Belt and Road projects that has ended in a 99-year lease. “We’ve not seen a pattern of deliberate entrapment in order to get some strategic advantage,” Brautigam said.

Update 10/3/19: 'Coal is still king' in Southeast Asia even as countries work toward cleaner energy

Update 10/29/19: In Laos, A Chinese-Funded Railway Sparks Hope For Growth — And Fears Of Debt

Update 12/14/19: China has invested heavily in the Mediterranean region as part of its Belt and Road initiative and controls a string of major eastern Mediterranean ports, including Piraeus.

Update 3/4/20: One of China’s Most Ambitious Projects Becomes a Corridor to Nowhere.

Update 5/8/22: China's Belt and Road is so enormous that its impacts could accelerate climate change.