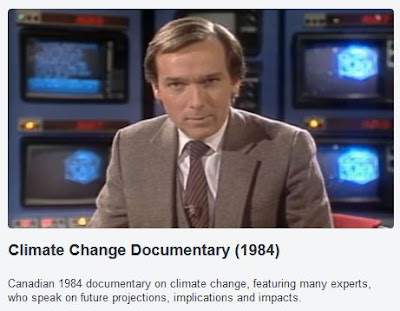 from Climate State: a half hour presentation

During the late 1970s it became increasingly clear that the planet was warming, culminating in the landmark Charney Report, published in 1979. Forty years ago, scientists accurately predicted climate change. We are living it now.

This 1984 documentary outlines our understanding of global climate change at the time. Topics discussed include, the scientific consensus, weather patterns, sea level rise, adaptation, climate actions, or the greenhouse effect. There's weather, and then there's climate. Weather patterns come and go, but forecasting has become much more accurate through improved meteorological techniques. Climate change is harder to predict. But, as the CBC's Peter Kent shows in this 1984 documentary, it's happening. Carbon dioxide levels in the Earth's atmosphere have been steadily rising.

On the global front, the first COP by the UNFCCC was convened in 1995, and began its long, torturous path towards the Kyoto Protocol of 1997, an international treaty which extends the 1992 United Nations Framework Convention on Climate Change (UNFCCC) that commits state parties to reduce greenhouse gas emissions, based on the scientific consensus that global warming is occurring. It came into effect in early 2005.

The global warming issue didn't publicly resurface again for a couple of decades, until Al Gore took his presentation on the road after his electoral loss to Bush in 2000. The "Inconvenient Truth" is a 2006 American concert film/documentary film directed by Davis Guggenheim about former United States Vice President Al Gore's campaign to educate people about global warming. The film features a comprehensive slide show that, by Gore's own estimate, he has presented over a thousand times to audiences worldwide beginning in 2004. That movie is available here. In 2007, Gore was awarded the Nobel Peace Prize, along with the Intergovernmental Panel on Climate Change, for “informing the world of the dangers posed by climate change.”

Some of the background on that movie and its development from the famous traveling slide show is here. Over time, cynicism and denial from the Bush administration eroded the momentum established by the movie. When the Obama administration laid out its policy for addressing climate change in the 2013 State of the Union speech, it was a signal change for addressing the issue. At that point, Gore bounced back with his Climate Reality project, which continues today in a global climate advocacy movement.

The next big global step from the UNFCCC came with the Paris Climate Accord of 2015 that promised to strengthen the global response to the threat of climate change by keeping a global temperature rise this century well below 2 degrees Celsius above pre-industrial levels. 195 countries adopted the first-ever universal, legally binding global climate deal.

Except that in June of 2017, the Trump administration announced that it would no longer participate in this treaty, which could become effective in November of 2020. With the Trump administration currently holding sway over the denialist movement and in thrall to the fossil fuel industry as well as the Saudis, Gore now continues to advance the climate change agenda with several projects that he's pushing forward, including the earth observation DSCOVR satellite with NASA.

Update 8/13/19: “Kochland” examines the Koch brothers’ early, crucial role in climate-change denial - their role went as far back as 1991.

Update 8/21/19: Readings on the pioneers of climate science