We Are Not Alone


"I don't think we're going to make it," John Doerr proclaims, in an emotional talk about climate change and investment in 2007. Spurred on by his daughter, who demanded he fix the mess the world is heading for, he has made a commitment to solving the environmental and climate change issues via technology and green investing. He is chair of Kleiner Perkins Caufield & Byers, an American venture capital firm headquartered in Silicon Valley that has backed early investors in many significant companies, including Amazon, AOL, Compaq, Electronic Arts, Google, Intuit, Macromedia, Netscape, Segway, and Sun Microsystems, with his focus on greentech.

In 2011, he was part of a group that met with President Obama, including Stanford University president John Hennessy, former Genentech CEO Art Levinson, and Steve Westly, founder of the Westly Group. This group backed the environmental policies of the Obama administration and advocated climate change action.

"Climate Security Consensus Project: Our determinations above are based on the impacts of the most likely case.  There is a small chance that the impacts will be less than expected.  There is a greater chance that the impacts will be even worse. It is therefore of critical importance that the United States addresses climate change in a way that is commensurate with this risk profile. In this context, the United States will need to “manage the unavoidable and avoid the unmanageable.” This requires a robust agenda to both prevent and prepare for climate change risks, and avoid potentially unmanageable climate-driven scenarios. Failing to do so will magnify and amplify risks to existing and future U.S. national security objectives."

They cite a quote from Joe Kaeser,  CEO of Siemens:

“A NUMBER of major companies — from PepsiCo to Walmart to U.P.S. — have recognized that corporations have a responsibility to address the causes of climate change before it is too late. We do not have to wait for an international treaty or new regulations to act..”

This group issued a letter to former Secretary of Defense James Mattis on May 8, 2017. The Department of Defense (DoD) and the intelligence community have been aware of this “threatmultiplier,”and taking actions to address it, since the early years of the George W. Bush Administration. By many measures, DoD has been leading in this area, driven naturally by its mission to protect the United States from harm. More recently they issued a press release: A Responsibility to Prepare – Military and National Security Leaders Release New Reports on Climate Change.

The United States Navy operates on the front lines of climate change. It manages tens of billions of dollars of assets on every continent and on every ocean. Those assets—ships, submarines, aircraft, naval bases, and the technology that links everything together—take many years to design and build and then have decades of useful life. This means that the navy needs to understand now what sorts of missions it may be required to perform in 10, 20, or 30 years and what assets and infrastructure it will need to carry out those missions. Put another way, it needs to plan for the world that will exist at that time.

They are taking the initiative to act on providing a low-carbon future, and clearly some of the corporate leadership is providing the funding to make this happen even if they're not making a lot of public statements about it right now, particularly in the face of a US administration that is trying to revive the coal industry. To the people deeply concerned and frightened about the climate change that's happening right now, it would appear that all is lost and the situation is hopeless as our planet continues to disintegrate under rapidly increasing global temperatures. But there's an underlying structure of progress that's evident, and it has the embedded potential for rapidly addressing the carbon emissions issues.

We must unleash these energies around climate change immediately, and undertake the enormous effort that will be required to move off of fossil fuels. It's there and we can all do something about this, but we've got to find the will to deal with these at such point that it makes a difference in the time that's left!

Update 11/1/18: Hansjörg Wyss is a philanthropist and conservationist who is donating $1B for biodiversity

Update 11/ 11/18:  A coalition of investors has written corporations asking for transparency. 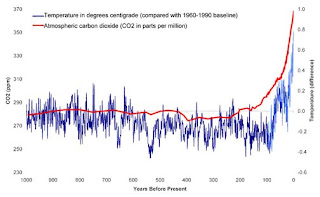 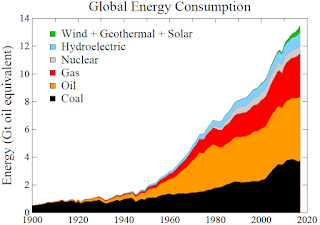 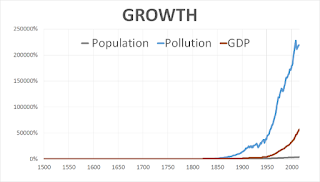 Climate change is rapidly accelerating around the globe, with unprecedented warming that is creating the conditions for enormous arctic methane releases that will intensify the problem beyond our ability to mitigate the impact or make up for the lack of food and water that this will create for the nearly eight billion people on this planet. Settled science shows that this rapid change is an amplification of natural variability due to the carbon emissions since the industrial revolution - when the energy technologies became the basis of human expansion, resulting in an exponential increase of the global exchange basis in petrodollars as a gauge of wealth. In summary, three graphs show the problem clearly (click to enlarge).

In the first one, a temperature vs. atmospheric concentration of GHG's chart: At the end of the last Ice Age, the level of carbon dioxide in the atmosphere soared. As the CO2 level rose, so did the temperature. Many graphs are available on the internet, here's a video animation.

The next chart is from James Hansen: the principal follow-ups to the 1992 Rio were the 2008 Kyoto Protocol and the 2015 Paris Agreement — wishful thinking, hoping that countries will make plans to reduce emissions and carry them out. In reality, most countries follow their self-interest, and global carbon emissions continue to climb.

Aubrey Meyer shows in his graph the fundamental correlation of human activity and GHG emissions: "If the problem is the exponential growth of anything, which one of these (if any) is exponential . . . Population Pollution 'Pecunification' (GDP) and therefore is the 'problem". It's pretty clear that the driving factor in emissions is the technology that ramps up carbon emissions and is driven by the GDP expansion as humans chase wealth. This is also why corporate opposition to solving this problem is so acute, despite the rapidly increasing global climate damages that result from it. So population increase is not the driving factor for carbon emissions, but rather represents the increasing impact of environmental degradation from expanding human habitation and energy demand. Our carbon absorption sinks are diminishing very quickly.

Just recently, Naomi Klein talked about underlying systemic distortions like GDP in her article about a major New York Times publication that has outlined the problem we're facing: Capitalism Killed Our Climate Momentum, Not “Human Nature”.

"When I surveyed the climate news from this period, it really did seem like a profound shift was within grasp — and then, tragically, it all slipped away, with the U.S. walking out of international negotiations and the rest of the world settling for nonbinding agreements that relied on dodgy “market mechanisms” like carbon trading and offsets. So it really is worth asking, as Rich does: What the hell happened? What interrupted the urgency and determination that was emanating from all these elite establishments simultaneously by the end of the ’80s?

"I wrote a 500-page book about this collision between capitalism and the planet, and I won’t rehash the details here. This extract, however, goes into the subject in some depth, and I’ll quote a short passage here:

We have not done the things that are necessary to lower emissions because those things fundamentally conflict with deregulated capitalism, the reigning ideology for the entire period we have been struggling to find a way out of this crisis. We are stuck because the actions that would give us the best chance of averting catastrophe — and would benefit the vast majority — are extremely threatening to an elite minority that has a stranglehold over our economy, our political process, and most of our major media outlets."

And she concludes with:
"We aren’t losing earth — but the earth is getting so hot so fast that it is on a trajectory to lose a great many of us. In the nick of time, a new political path to safety is presenting itself. This is no moment to bemoan our lost decades. It’s the moment to get the hell on that path."

So what's happening as a means to deal with this? Global collaboration on climate change issues are arising through groups such as LEAP, cofounded by Naomi Klein, City By City created by The Climate Mobilization and larger international groups created by 40Cities, ICLEI, the Global Covenant of Mayors for Climate and Energy, and many others. This struggle is built from the bottom up, mobilizing all the people, involving everybody in actions that fight for mitigation, adaptation and sustainable development, with goals to end poverty and hunger; reduce inequalities; ensure health,education; sustainable energy; water and work for all; and foster sustainable cities. Bill McKibben summarizes some of these efforts in his recent article, pointing to grassroots climate action.

So, goodbye to corporate capitalism and sold-out governments. It's our turn now. 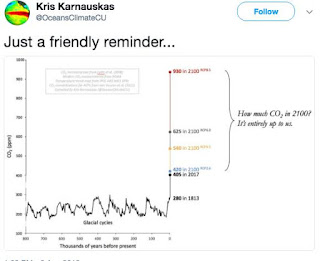 Update 1/17/19: Can there be Sustainability in an Economy Rooted in Growth?