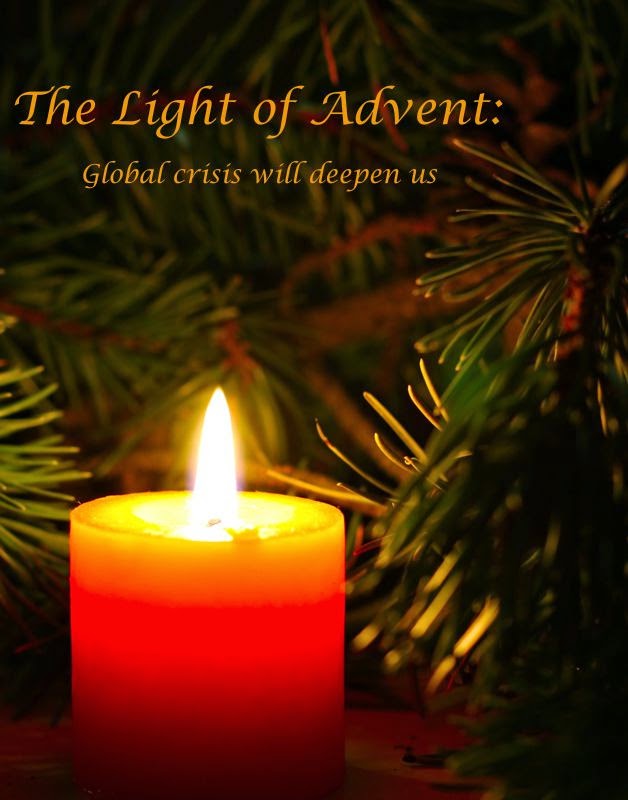 This Advent season, we will have the gathering of world representatives for COP 20 in Lima, Peru in order to forge a consensus on the framework for a global climate agreement to be finalized in December 2015. Last September there was a preliminary UN conversation in Washington, D.C. along with several parallel conferences and the People's Climate March taking place worldwide. One notable presentation for the Club of Rome was a presentation by David Wasdell, the Director of the Apollo-Gaia Project which is part of the Meridian Programme in the United Kingdom. It was called, "Beyond the Summit,Sensitivity, Target Temperature & the Carbon Budget".

In the presentation, Wasdell is adamant about the clear and present danger of our current global carbon emission path:

It is now abundantly clear that limiting temperature change to 2°C cannot be achieved by emissions reductions on their own. There is no available carbon budget. Emissions must be reduced to zero in the shortest possible time and the existing stock of atmospheric greenhouse gasses must be drastically reduced. Moreover, the 2°C target has been set far too high and must be lowered from 2°C through 1.5°C to a mere 1°C in order to avoid dangerous climate change, and comply with the global commitment to the United Nations Framework Convention on Climate Change.

In conclusion - Ending the Addiction: an Inspirational Challenge

This conclusion that we have already exceeded our carbon emissions budget under which we have a habitable planet is grounded in Wasdell's systemic calculations of the global sensitivity factor, which has been omitted in previous IPCC calculations and studies along with the feedback mechanism from arctic melting. He takes a very deterministic stance on this factor, sounding the alarm on its critical importance in the climate picture as well as its omission from the models used by the IPCC.

Wasdell notes in an earlier paper that the IPCC models are minimally computed in the AR4 report, and this remains uncorrected in the AR5 models recommending the 2°C upper bound, estimating the 2.6 RCP scenario of a remaining 250 Gt C carbon emission budget. The IPCC AR5 report does state that the Climate Sensitivity factor is important, but it lies within a range of consensus. So Wasdell's position is that the budget really needs to be at zero as soon as possible, setting that point at about 2050; therefore the current models are horribly in error and will only produce a lethal future scenario for our planet if they're adopted in Paris at COP 21. The Precautionary limit should be 1°C to allow for the probable overshoot in accomplishing this goal. That is merely a path on the way back to a safer level of 350 PPMV for the atmospheric concentration of carbon which should be established by 2100 if we want our civilization to continue.

The further path - back to the natural atmospheric carbon concentration of 280 PPMV - that we experienced prior to the Industrial Revolution in 1800 is a task for our descendants (if we have them) in the next century beyond 2100.

The practical reality is that these agreements don't forge the necessary action. Historically, the goals recede in the face of economics and pragmatic local policies. According to Rob Stavins, the Paris agreement could provide a post-Kyoto framework that finally gets the world on track for an eventual climate fix. “The way to judge the negotiations coming out of Paris is whether or not the structure is a sound foundation for meaningful long-term reductions.”
Posted by LPB at 1:00 AM
Newer Posts Older Posts Home
Subscribe to: Posts (Atom)