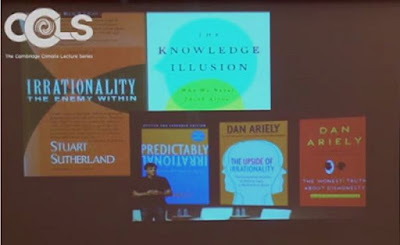 First in a series of three lectures comprising the Cambridge Climate Lecture Series 2017, Baroness Bryony Worthington presents the dilemma that is unfolding now between the science and the politics of climate change dialogue:

"The evidence is clear that we are in an age of consequences...There is a constant stream of information now for those who are tuned to it that show us that many of the impacts that we were expecting to unfold over the second half of this century are starting to be felt now."

It's evident that our human civilization is losing the race to stave off catastrophic climate change in the face of its political inaction, and we need to drastically up our game. That takes us to net zero carbon emissions by the middle of this century, per the Paris agreement of 2015. She observes that the threat of Donald Trump had an impact on the Paris agreement in that it caused that agreement to come into force earlier than it might have otherwise done, thus Trump unwittingly helped bring about ratification.

Overcoming political headwinds involves the "Tragedy of the Commons" wherein inadvertent individual actions add up to destructive impacts that nobody takes responsibility for. A classic example is the Pacific Garbage Patch that exists in the Pacific Ocean that is strangling and poisoning sea life with tons of plastic garbage dumped in the ocean over decades. Except there's a Dutch guy named Boyan Slat who is doing exactly that.

"Tragedy of the Horizon" is a phrase that means that short-term thinking is unfortunately endemic throughout our politics, and also, unfortunately, our financial system. This is leading to very poorly informed decision-making, and where attention to only the bottom line by corporate decsion makers is destructive to the long view that encompasses systemic views of the world and addresses the very serious issues involving climate change. The antidote to this is to create and support independent apolitical institutions, such as universities and research facilities.

A third factor is the fossil fuel industry itself, which has contributed greatly to human civilization and its benefits inasmuch as their profits allow them to now wield a lot of power in the political sphere in the act of protecting their profits. The answer to this is a multivalent approach to problem solutions so that one factor doesn't override the entire dialogue; one simple tool like a carbon tax will not accomplish the necessary means to an end.

Having said all of this, there remains an approach to solving this problem via global scenario planning as it's employed by the Rocky Mountain Institute (RMI), an independent apolitical entity:

RMI will release analysis results describing five scenarios to limit global average temperature increases by the end of the century to approximately 1.5°C above preindustrial levels, a goal that most analysts see as nearly impossible to achieve. According to the United Nations Environment Programme’s recently released Emissions Gap report, even if the pledges made by nations participating in the Paris Agreement are fulfilled, global emissions will put us on a path to temperature rise of 2.9 to 3.4°C this century. Limiting temperature increases to less than 1.5°C will require more and deeper change in the years ahead than most analysts contemplate, with shifts not only in the energy sector but also in agriculture and land use. Surprisingly, their assessment indicates that such changes are still within reach, but only if global actions lead to a dramatic acceleration of the energy transition.

Their diagram of positive feedbacks that could accelerate the energy transition shows how multiple actors in many different markets spur the current renewable energy movement. Much of the growth in renewable energy globally is led by private companies and customers, who find compelling economic reasons to make the switch. This is in contrast to a traditional utility responsible for the planning and operation of a grid that supplies power from centrally owned power plants. Instead of large, capital-intensive projects, centralized decision making, and high-risk business-to-business transactions, much of the new energy revolution is diffuse, smaller scale, decentralized, and based on business-to-customer transactions.Renewable resources, on the other hand, are abundantly available worldwide, often in reasonable proximity to demand. RMI’s analysis describes a possible fast track path to a global clean energy future that is led by synergistic and compounding changes in key industries. Rapid scaling of low-cost manufacturing for solar PV, wind, batteries, electric vehicles, and other key technologies is at the heart of this transition.

So this different kind of thinking, in the corporate and political arena, can be driven by a multitude of actions from many players, rather than the top-down assumptions employed by the world's governments. Each player has a significant position and influence in this multi-level sphere of action, and all of them add up to an important resolution of this global problem that we all have to solve. This is a game-solution, not a dictated process, with an outcome that isn't predictable.

This is important because some global corporations have become bigger than many countries, and they have placed themselves beyond the reach of governments and global rule-making bodies. They have so far managed to shirk their responsibilities in solving this problem, but that's no longer an acceptable position because of the damages that they cause to the environment and all the people living in their countries all across the globe. Accountability is about to become the answer to the "Tragedy of the Commons."