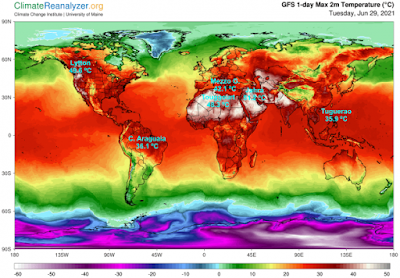 The World Meteorological Organization maps out the heat of climate change in June. An exceptional and dangerous heatwave is baking the Northwestern USA and Western Canada in areas which are more synonymous with the cold. Temperatures have reached more than 45.0°C on consecutive days, with extremely warm nights in between. The destructive impacts of climate change have been anticipated by climate scientists for decades. The accelerating damages from overheating the biosphere have been shown to be even worse than we've expected, and it's happening faster and faster. The ClimateReanalyzer map above shows the massive heat that's currently sitting in a dome over western Canada and the United States.

We may already be in a global heat state that's irreversible because of the feedback emissions from melting permafrost, the burning forests and emerging global droughts due to the heat already absorbed in the ocean and on the land over the last 150 years. It's a runaway climate scenario that has started with a vengeance. The challenge now is for the global communities to come to a resolution to reduce carbon emissions to zero by 2030. Of course we're not going to be able to hit this benchmark, and the resulting decimation of our planet will mean that human civilization will not be able to survive.

The details of the Endgame are summarized in this blog which traces the work of the Global Commons Institute and the efforts by Aubrey Meyer to develop a framework for the global climate agreement which includes the necessary emission reductions required to keep the planet from heating up past 1.5C. Over the past 30 years we have not been able to accomplish this agreement primarily due to the intransigence of the US, China and Europe. This is due to the immense interference and obfuscation by the fossil fuel industry, which has leverage in all the major governments of the world.

Update 7/18/21: Is This the Beginning of Runaway Global Warming?

Update 7/19/21: The Amazon is Burning and the Earth is Dying Slowly

Update 7/20/21:  An Open Letter to All Climate Scientists