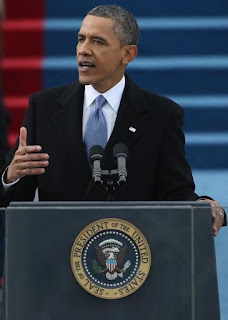 We, the people, still believe that our obligations as Americans are not just to ourselves, but to all posterity. We will respond to the threat of climate change, knowing that the failure to do so would betray our children and future generations. Some may still deny the overwhelming judgment of science, but none can avoid the devastating impact of raging fires, and crippling drought, and more powerful storms. The path towards sustainable energy sources will be long and sometimes difficult. But America cannot resist this transition; we must lead it. We cannot cede to other nations the technology that will power new jobs and new industries – we must claim its promise. That is how we will maintain our economic vitality and our national treasure – our forests and waterways; our croplands and snowcapped peaks. That is how we will preserve our planet, commanded to our care by God. That’s what will lend meaning to the creed our fathers once declared.

With that, a Bicameral Climate Change Task Force has just now been established, co-chaired by Rep. Waxman, the Ranking Member of the House Energy and Commerce Committee, and Sen. Whitehouse, the Chairman of the Subcommittee on Oversight for the Senate Environment and Public Works Committee. This article has a link to an important letter that was written by them to President Obama, establishing that the United States must assert its leadership in addressing climate change. This is in response to an overwhelming petition by the public regarding a climate change discussion to the then-candidates during the debates, which was deflected by both parties.

This immensely important issue was thus put out in front as a major domestic crisis, requiring the attention and the resources of the entire country. What has been left unsaid is how this shift in position will play out in the global sphere.

The world is looking towards the USA and China to step up to this issue in an immediate and substantive way, and reaffirm the 2 degree climate change limit that was a global target at Durban in 2011. Both countries are the biggest emissions sources, and they remain outside the agreement framework that is trying to be established. This can't continue because the carbon emissions are already exceeding the limits of the 2 degree impact.

This leadership by the USA is critically necessary even as other countries and many corporations prepare for a warmer and more volatile planet. These carbon emissions must be reduced by all countries very quickly, or there's no future for the world's people and its living systems.

Here is the hope that it will happen.