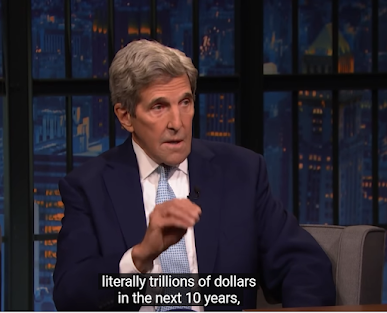 The politics of dealing with climate change solutions and the implementation of carbon reduction in various industries around the world has been so difficult that our global emissions have continued to climb, putting the entire world in serious danger. The COP meetings via the UNFCCC have so far failed to produce quantifiable results in the negotiations of the parties, largely due to intransigence by the major nations - US, China, the UK and Russia. The real work to implement these policies hasn't been undertaken as policy. Some groups have begun to put out policy frameworks to move climate change implementation into the real world.

The Wilson Center, is an independent think tank based in Washington, DC that examines specific topics and their global impacts for review by policymakers and organizations and the public. Topics they cover are listed on their website, which are extensive and relevant, such as Foreign Policy is Climate Policy - a report from the Wilson Center. Published September 2020, Updated March 2021. A part of their report relates to the emergency of carbon reduction in the immediate future.

"A strong warning of the immediate urgency of implementing climate change policies is a call from UN Chief Antonio Guterrez that the planet is heating more quickly than current models have predicted: "Speaking at the launch of a U.N.-backed report summarizing current efforts to tackle climate change, Guterres said recent extreme weather — from Hurricane Ida in the United States to floods in western Europe and the deadly heatwave in the Pacific Northwest — showed no country is safe from climate-related disasters.

“These changes are just the beginning of worse to come,” he said, appealing to governments to meet the goals of the 2015 Paris climate accord.“Unless there are immediate, rapid and large-scale reductions in greenhouse gas emissions, we will be unable to limit global heating to 1.5 degrees Celsius (2.7 Fahrenheit),” said Guterres. “The consequences will be catastrophic.”

A very specific topic development in another report that has just been issued is the massive threat of climate change.Geostrategic Competition and Climate Change: Avoiding the Unmanageable by Robert S. Litwak on September 15, 2021. "Humanity is at an inflection point as it faces the twin threats of climate change and nuclear war. An historical vignette offers perspective. During the 1985 Geneva summit, President Ronald Reagan privately asked Soviet leader Mikhail Gorbachev if the two superpowers could suspend their Cold War differences and unite if the Earth was invaded by aliens. Today the world faces the functional equivalent in climate change. The most vital issue in international relations is whether the great powers can take concerted action to avert climate catastrophe—or will allow unconstrained geostrategic competition to undermine that urgent necessity."

Taylor & Francis Online has some comprehensive articles on Environmental Politics. This is an organization that is a reputable international publisher which publishes hundreds of journals and thousands of books. They publish and host some of the top-cited journals in different scientific fields. Their research on sources used by the US congress in their history of climate change debates is outlined in a recent article published on August 25, 2021: Weaponizing economics: Big Oil, economic consultants, and climate policy delay.

"For decades, the fossil fuel industry has hired economic consultants to help weaken and delay US and international climate policy. Among them, the economic consultants of Charles River Associates played a key role, helping to undermine carbon pricing, international climate agreements, and other climate policies from the early 1990s onward. The work of these economists was often portrayed to the public as independent, when in fact it was funded by the fossil fuel industry, and their models were incomplete and biased in favor of continued fossil fuel use. Yet their conclusions often passed without challenge and eventually came to represent a significant part of conventional economic wisdom.

Research on the climate change counter-movement has traditionally focused on documenting the promotion of disinformation regarding climate science (Brulle 2014, Franta 2021). While such disinformation has played a crucial role in delaying effective climate policy, the fossil fuel industry and broader climate change counter-movement have also made frequent use of economic arguments to justify inaction. At the same time, the fossil fuel industry has made substantial investments in influential climate economics programs across the US. Further attention is needed on the role of economists and particular economic paradigms, doctrines, and models within climate politics and the perpetuation of fossil fuels."

The political diplomacy which needs to be carried out by the US is tasked to John Kerry, the US  Special Presidential Envoy for Climate. Key workstreams and focus areas for the Special Presidential Envoy’s team include: constructive engagement in the Paris Agreement and related agreements and processes; driving global greenhouse gas emission reductions so as to keep a 1.5 degree Celsius limit on temperature rise within reach; enhancing adaptation and resilience to climate impacts; climate-aligning financial flows; driving overseas clean energy innovation and competitiveness; and better integrating climate and other areas, including the ocean, biodiversity, the Arctic, and international shipping and aviation activities. This is an extensive policy on the climate crisis which has specific urgent measures for getting to zero carbon. So we shall have to measure the outcomes of COP26 in Glasgow by the implementation of the US policies in the real world.