Searching for Unicorns in India 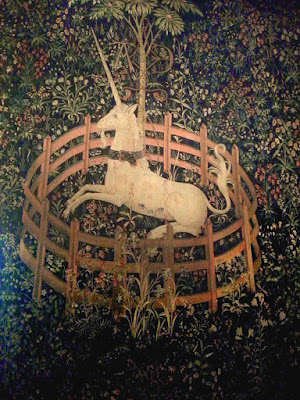 Throughout history, the ancient legend that unicorn horns could counteract poison and purify water led to a frenzy of counterfeit potions. At its height, “unicorn horn” was literally worth 10 times its weight in gold. In 1560, German merchants sold a unicorn horn for an astronomical 90,000 scudi—then about £18,000—to the pope. Pharmacies in London sold powdered unicorn horn as late as 1741.

Unicorns are not found in Greek mythology, but rather in the accounts of natural history, for Greek writers of natural history were convinced of the reality of unicorns, which they located in India, a distant and fabulous realm for them. The earliest description is from Ctesias (5th Century BC) who, in his book Indika ("On India"), described them as wild asses, fleet of foot, having a horn a cubit and a half (700 mm, 28 inches) in length, and colored white, red and black.

This rare legend existed for two thousand years; the magical properties for which we now have technologies to filter and purify the elements are no longer sought out in powders and salves derived of unfortunate animals such as narwhals and rhinos.

The collapse in oil prices this year has upended the fossil fuel business, which has inverted the calculus on the investment in this sector. Countries like China and India have previously insisted on being able to pollute their economies into development and growth. How can these processes be purified and cleaned of carbon? What magic can be wrought that rapidly brings down the lethal emissions that threaten our global future? The elixir may be that of of the diminishing value of carbon fuels, and how that is turned on its head.

From OilPrice.com: India has actually removed subsidies on fuel and transitioned into taxing them since 2014. Citing research from the World Bank, Mr. Subramanian says that India is essentially taxing carbon somewhere on the order of $60 per ton of CO2 for petrol and $42 per ton for diesel, “substantially above what is now considered a reasonable initial tax on CO2 emissions” of $25 to $35 per ton.

That provides India with a lot to brag about heading into the international climate negotiations later this year in Paris. Or as Mr. Subramanian puts it, “India – especially with a new PM – can credibly repudiate its past perceived image as a recalcitrant negotiator, focused on asking others to contribute without offering contributions of its own.”

This shifting global economic picture will have a significant impact on the discussions in Paris at the COP 21 negotiations later this year. In addition to the possibility of removing subsidies from all fossil fuel industries, this also allows the true pricing of carbon to take place alongside that of the clean technologies and renewable energy sources. Once the tipping point is reached in the pricing structure, the downward slope of carbon use can become very steep very rapidly as a matter of economics as well as of necessity for our survival. This then becomes a natural process of moving from old industries to new industries, just as the horse and buggy almost completely faded from urban life in the space of about 50 years from the invention of the automobile. An even more rapid transition is entirely possible and profitable with the current state of clean technologies.

This diagram from Aubrey Meyer shows the nature of this necessary reduction, and the immediate shift that requires either the magical properties of a unicorn or the simple very rapid transition in the economic calculus to reflect the actual values of these purified energy sources. The unicorn does appear to be in India.

Update 10/23/15:   Getting to Zero Emissions - Paul Allen on where dreams meet reality. Speaking at the UN climate talks in Bonn, Paul Allen of the Center for Alternative Technology talks about developments in modelling and innovation that show we can make a speedy transition to clean energy world by 2050.

Update 10/24/15: How The Petrodollar Quietly Died, And Nobody Noticed