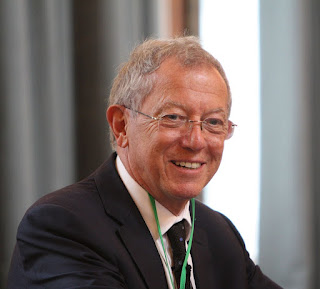 The organization Plan B. Earth has now initiated a legal challenge to the UK Government regarding its failure to reduce emissions in line with Paris Agreement. The BBC reports former chief scientist Sir David King (above) is backing legal action against the government over its failure to follow up on proposal for binding zero emission target; the filing is online here. On January 29, 2016 at IEA Headquarters, Paris, a Big IdEAs panel was held to discuss “Towards decarbonising the global economy: the direction of travel after COP21” and Sir David King made a comprehensive presentation to those attending the panel. He is an important player in the actions towards holding corporations accountable for the carbon damage that they have done, and deliberately obstructed global efforts to address the emissions issues for decades.

The Union for Concerned Scientists has also known for decades that fossil fuel companies like ExxonMobil have spent millions of dollars to delay action on global warming. This organization is standing up against the disinformation campaign in the US with respect to climate change, and lists the organizations that are propagating public denial and misinformation. Now, groundbreaking research by two UCS scientists calculates the actual portions of sea level rise and global temperature increase attributable to specific fossil fuel companies. The peer-reviewed study, authored by Brenda Ekwurzel, James Boneham, Mike Dalton, Rick Heede, Roberto Mera, Myles Allen and Peter Frumhoff and published in Climatic Change, analyzed and quantified the climate change impacts of carbon dioxide and methane emissions traced to each company for two time-periods: 1880 to 2010 and 1980 to 2010. From storms to droughts to wildfires, the impacts of climate change exact enormous costs to taxpayers. This report is a critical step in making fossil fuel companies like ExxonMobil pay their fair share.

The UCS is laying the groundwork for "climate attribution" lawsuits in the US, to make the ExxonMobils of the world own up to what they've done and pay their fair share of the costs of preparing for dealing with the damage brought by climate change. Meanwhile,Trump's Environmental Protection Agency condemned scientists for "politicizing" Hurricanes Harvey and Irma by simply mentioning climate change. Officials at three different agencies (EPA, the Department of Energy, and Department of Agriculture) have banned "the double C—word"—climate change—from reports, grant applications, and studies—and shuttered an official climate change office. The DOE has issued official denials about this as policy. The Department of the Interior also cancelled a study looking at health risks for people living near mountaintop removal coal mines. Thus this administration continues the corporate onslaught against nature and all of humanity.

It's no longer politics as usual as the scientists, ecologists and engineers take a stand against governments that are in thrall to corporate profiteering at the cost of our planet and everything living on it.

Update 10/3/17:  Global Legal Action Network is assembling a case against 47 European countries for their contributions to climate change

Update 10/5/17: Economic Case for Climate Action in the US

Update 10/7/17: A district court judge in North Dakota has barred climate change scientist Dr. James Hansen and other experts from testifying in the landmark trial of Michael Foster, one of the 11 climate activists with the group Climate Direct Action who temporarily halted the flow of tar sands bitumen from Canada into the U.S. in a #ShutItDown action last October.

Update 10/12/17: PM of Dominica to the UK general assembly in Sept. 2017: Carribean nations are suffering catastrophic damages because of climate change, which they have not contributed to.

Update 10/29/17:  Alleging that the state is violating their constitutional rights by putting fossil fuel production above the safety of their lives,16 young Alaskans filed a constitutional climate change lawsuit against the State of Alaska, Governor Bill Walker, Department of Environmental Conservation (DEC) Commissioner Larry Hartig, and five state agencies on October 27, 2017.

Update 11/3/17: Global warming is increasingly being fought in the courtroom.

Update 11/19/17:  Hansen is calling for a wave of lawsuits against governments and fossil fuel companies

Update 5/12/18:  The environment is finally getting its day in court

Update 10/2/18: Can Climate Litigation Save the World?

Update 10/3/18:  The Fifteen-Year-Old Climate Activist Who is Demanding a New Kind of Politics