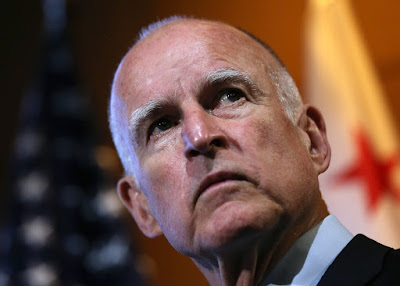 Our so-called "environmental" governor here in California has shown his true stripes with his loving embrace of the oil and gas industry. In addition to the lax response to the massive Porter Ranch methane leak, Governor Brown has shunned calls to move toward reducing the state’s oil production, and while he has supported strict regulation of hydraulic fracturing, commonly called fracking, he has opposed a ban on the technique.

Daily Kos has traced more oil industry connections to Brown. More details on these industry lobbying connections are recorded here. As Governor Jerry Brown reels from a series of scandals involving the capture of the regulatory apparatus in California under his administration, Brown announced the resignation of his head oil regulator, Steven Bohlen, on November 30, 2015. This becomes even more dire as one sees the regulatory capture of public agencies meant to protect the public from destructive industry practices.  Two public agencies have been gutted with implicit support from the Governor's office; there have been damaging coups at these two vital state agencies.

First, the unwarranted dismissal of Charles Lester, the respected head of the California Coastal Commission, was simply about money and power. Subsequently, a coalition of environmental organizations has submitted a resolution asking the state to renew its commitment to comply with these laws. The formal reply to the Director's ouster, from the Governor's office, was that “They made it clear they were very angry about the selection process and the fact that they were not conferred with before we hired Charles Lester,” said Mary K. Shallenberger, who was chairwoman of the commission in 2011. This despite clear moves that indicate that it was Brown's appointees that led the way to Lester's firing. This situation has also prompted a bill from the California State Assembly to enact legislation to require people who lobby the commission to register with the state and disclose their clients with business pending before the powerful land-use agency.

The other takeover, from the Republican side of the industry, involved the ouster of the longtime executive officer of the AQMD under a new Republican majority on the Board. It's a move by the Western States Petroleum Association to undermine regulatory emissions controls over their industry. Again, this has led to legislative efforts by Kevin deLeon in the State Senate to counteract industry encroachment by introducing legislation to add three new members to the South Coast Air Quality Management District board — one public health expert and two environmental justice members — to represent communities suffering from pollution. An objection to the AQMD action was also filed by Los Angeles Mayor Eric Garcetii. There is also now a lawsuit filed by the Natural Resources Defense Council and the environmental law nonprofit Earthjustice against the industry-weakened pollution standards.

All this during a global climate emergency, as California prepares for the extreme effects of climate change that exacerbates the severe 4-year drought that the state is in.

Update 6/21/16: Governor Brown's Attack on CEQA will be a Disaster

Update 4/11/18: Brown should stop the supply side of fossil fuels in California - McKibben

Update 5/23/18: How California sabotages its environmental goals; its oil production cancels out the Paris Agreement.

Update 5/24/18: EIA California State Profile - California is the third-largest US producer of petroleum

Update 7/12/18: Over two dozen climate scientists sent a letter to California Governor Jerry Brown, urging him to phase out oil and gas production in the state

Update 9/13/18: Little has been to discourage onshore oil production.

Update 10/8/18: Ties between the Delta Tunnels and his faux Marine Protected Areas

Update 7/12/19: Brown now finds himself under attack by climate activists