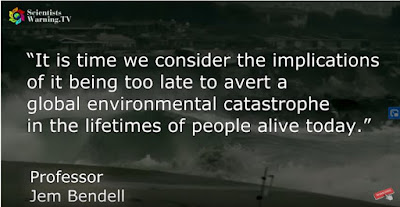 Jem Bendell's  Deep Adaptation video (above) was posted a year ago on Jan. 27th, 2019. He talks about Resilience,Relinquishment, Restoration. His summary of "After Climate Despair" is here, dated April 12, 2019. His earlier paper of Dec. 2018, Deep Adaptation:A Map for Navigating Climate Tragedy, is here.

His discussion of an inevitable near-term social collapse due to climate change is the result of the input and dialogue by scientists and climatologists for over 30 years now, with an increasingly clear picture forming of the near-term impacts of the destruction of the ecosystem. The UN has issued serious alarms in its IPCC report of August of 2018, declaring that carbon emissions must rapidly go to zero. It's not just the increasingly obvious climate devastation that's happening right now, for example the massive fires in Australia that are dumping huge amounts of carbon into the atmosphere, and the deepening global droughts that threaten water and food supplies in every country. The global heating is also responsible for the increasing acidity of the oceans and the destruction of life in its waters throughout the planet. The oceans have been storing the heat for several hundred years, and the impact of this is increasing rapidly.

Of greatest concern is the melting polar ice caps which are experiencing their hottest days on record. The issue going forward is the massive methane emissions that will occur as this process unfolds, which is a process that feeds upon itself as the emissions rise, leading to a runaway climate heating that could well lead to an extinction event.

“First, the probability of this pulse happening is high, at least 50 per cent according to the analysis of sediment composition by those best placed to know what is going on, Natalia Shakhova and Igor Semiletov. Moreover, if it happens, the detrimental effects are gigantic. . .the risk of an Arctic seabed methane pulse is one of the greatest immediate risks facing the human race. . .Why then are we doing nothing about it? Why is this risk ignored by climate scientists, and scarcely mentioned in the latest IPCC assessment? It seems to be not just climate change deniers who wish to conceal the Arctic methane threat, but also many Arctic scientists, including so-called ‘methane experts.” (Wadhams, pg. 127-28)

We have a clear responsibility to get emissions to zero from the human activities on our planet no later than 2040. However, the realities of this endeavor are daunting because we've delayed any action for over 50 years now, from the first Earth Day in 1970. This is our last decade to get it right. Our kids deserve a life, not the destruction of the only home we have.

Update 2/24/19: It doesn’t help matters that a feedback loop kicks in as the poles warm.