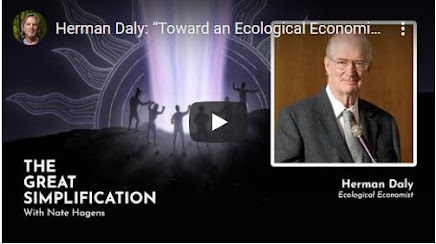 Herman Daly was a Senior Economist in the Environment Department of the World Bank, where he helped to develop policy guidelines related to sustainable development. While there, he was engaged in environmental operations work in Latin America. He is closely associated with theories of a steady-state economy. He was a co-founder and associate editor of the journal, Ecological Economics.In 1989 Daly and John B. Cobb developed the Index of Sustainable Economic Welfare (ISEW), which they proposed as a more valid measure of socio-economic progress than gross domestic product.

The "Mobilization of the Human Family" symposium set up by John Cobb explored a land tax in early 2001 for a discussion a different form of taxation. The intent was to create a white paper for a system of taxes that would balance the needs of the common good with a fair tax system, and new taxes on pollution and depletion of resources. This was triggered by the regressive taxation policies of the Bush administration that began to grow the divide between the wealthy and the middle class. Discussion of this issue was moving apace, until the land value tax existing in Pittsburgh at that time was repealed in the spring. John has since moved on with larger visions of a theology of ecology and the writings of Alfred North Whitehead and Charles Hartshorne. His many books, articles and symposiums framing "new economics" have also been included in the series, "An Introduction to Ecological Economics".

Daly and Cobb co-published a book, "For the Common Good", which talks about redirecting the economy towards community and the environment. Currently, Daly's podcast, The Great Simplification, outlines a way to reform our economic systems to become integrated with the way natural systems work, to formulate a cooperative economic system that works with the energy flows in nature. In what he calls super organism economics, he proposes reforming national accounts. Separate GDP into a cost account and a benefits account so that throughput growth can be stopped when the marginal costs and the marginal benefits get out of sync.

Earlier articles that I've posted about the need to revise the GDP metric, or replace it, are "The GDP Chimera"  (2012) and subsequently, "Gross Domestic Product"  (2014). Scientific American has recently published "GDP Is the Wrong Tool for Measuring What Matters". It’s time to replace gross domestic product with real metrics of well-being and sustainability.

The development of the value assigned to natural systems has been evolving for a long time, with the current thinking laid out in books, two of which are "Value of the Earth" and "Valuing the Earth: Economics, Ecology, Ethic".

Update 7/30/22: Back in 2019, in his book “Growth,” Smil called on the world to abandon growth to ensure the habitability of the biosphere