The Sound of Silence

"Fools," said I, "you do not know
Silence like a cancer grows
Hear my words that I might teach you
Take my arms that I might reach you"
But my words like silent raindrops fell
And echoed in the wells of silence

Many more conservative voices are beginning to join the chorus of progressive warnings over the impact of the changes taking place on our planet. The small voices we heard forty years ago are swelling in alarm at the rapid shifts that we're seeing now in climatology, oceanography, geography and the enlarging drought plagued lands across the continents. The willful blindness of governments and industries about the impact of fossil fuels are beginning to crumble. Willful blindness is a legal concept which means, if there's information that you could know and you should know but you somehow manage not to know, the law deems that you're willfully blind.

Or perhaps we now see that we're suffering a collective form of implicatory denial because of the overwhelming risks clearly before us, and now that denial is no longer possible or realistic. It has become too evident that swift changes must come and are coming to our economy because of the clear impact that carbon emissions are having on our planet.

The Yale School of Forestry and Environmental Studies now hosts a website for their project on Climate Change Communication: Bridging Science and Society. It consists of research, outreach and a synopsis of possible actions that people can take to speak out and take action on restricting the carbon emissions that are changing our planetary systems and degrading the ecology that supports life.

A group that's spending millions of dollars to actively promote the need for engagement in the discussion of climate risk is the Risky Business Project, whose members are presenting research to business groups that highlights how the effects of climate change, like increased flooding, as in the streets of Queens, N.Y., could hurt business and the economy. This group uses the Clinton Global Initiative as a platform to influence public policy.

The Aspen Ideas Festival this coming June will engage conversation on this critically important issue, including "Our Environmental Future" which is a look at the manifestations of climate change as seen through extinction, drought, and natural resource development, juxtaposed with the trailblazing technologies and ideas that can reverse trends and rethink human interaction.  The Aspen Institute mission is twofold: to foster values-based leadership, encouraging individuals to reflect on the ideals and ideas that define a good society, and to provide a neutral and balanced venue for discussing and acting on critical issues. It's influential on public policy through the press and the Atlantic Magazine.

The sound of silence has begun to shatter.

Update 3/11/15: Silences occur where powerful interests are at risk of exposure 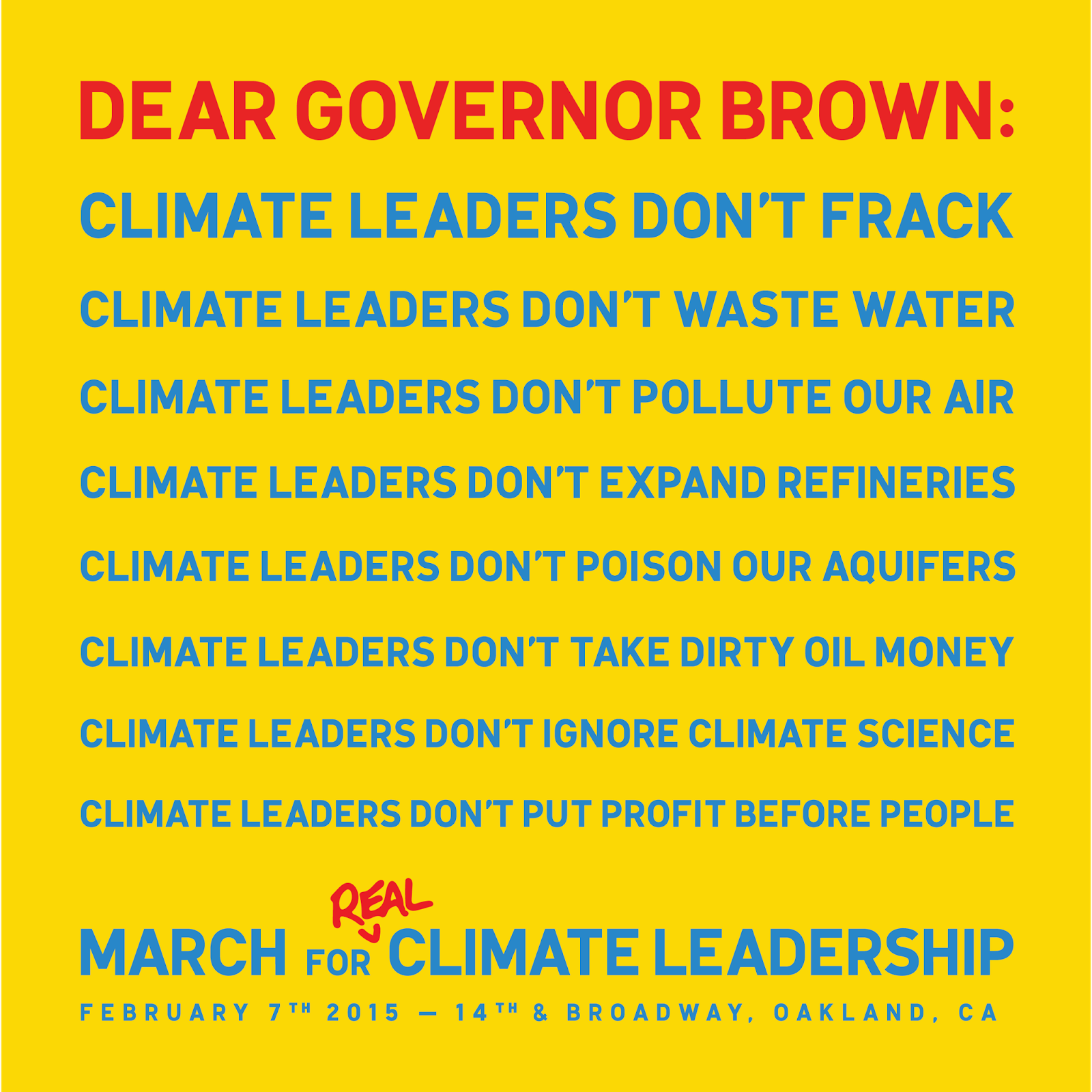 On Feb 10, several members from the California State Senate introduced a package of legislative proposals that will strengthen California's leadership in powering a new clean-energy economy. The proposals include historic benchmarks for pollution reduction, energy efficiency, and petroleum use that will spur innovation and investment and maintain California's lead in creating jobs in the advanced energy sector. This will be the first series of bills introduced by Senate Democrats to combat climate change and preserve the environment.

Details of the proposals along with bill language, charts, articles, and statements from a broad coalition of supporters are online at the State Senate page.

Our Governor Jerry Brown wishes to attend COP 21, as the state's big utility providers are all aware. Brown hopes climate policy advances in California and other states can be used to pressure heads of state during international climate talks in Paris in December. Per the Sacramento Bee, “We call this policy the road to Paris, because the governor wants a seat at the table in Paris,” said Rob Lapsley, president of the California Business Roundtable. “We want to be supportive – we told them that – but we’ve got to have a policy that provides balance.”

The Bee goes on to note: One month after Gov. Jerry Brown proposed dramatically expanding California’s greenhouse gas reduction laws, California Senate President Pro Tem Kevin de León announced legislation on Feb. 10 to enact the proposal. In a move to blunt opposition from business interests and moderate Democrats, de León cast the package of environmental measures as a jobs program. The legislative package includes measures to cut petroleum use in half by 2030 and to expand, from one-third to one-half, the proportion of electricity California derives from renewable sources such as wind and solar.

Yet the Governor got called out on his environmental grandstanding by a protest march this Feb 7, which calls for a ban on the increased fracking that is taking place in the state and poisoning groundwater supplies during a historic drought.

Across the country, Governor Jerry Brown benefits from the widely-held notion that he is a leader on climate issues, a legacy from his ecologically-framed "Governor Moonbeam" first two terms of 1974 - 1982. But over the last four years, Governor Brown has not delivered on his promise to put our water and health first in order to carry California into a new clean-energy economy. Instead, he’s chosen to expand extreme oil and gas extraction, which harms our communities and undermines his own greenhouse gas reduction goals for California. In March of last year, a protest march was held in Sacramento to urge the Governor to end fracking, and this issue has created tremendous public opposition activity to oppose the expansion of this destructive technology.

So, his new moniker has become "Big Oil Brown" to note the shift, and he is also favoring legislation that will drain water from the San Francisco Bay area with gigantic twin tunnels to direct water to the central valley agriculture community. For which the voters in Southern California are being asked to disproportionately to pay the bill. It's tragic that his legacy now consists of unsound environmental practices that directly counter his political posturing for the global climate movement, and critically undermines his credibility with the climate leadership in the US and throughout Europe.

Update 6/15/2015: Governor Brown isn't following through with the prudent approaches he has publicly outlined to California's climate and water issues.


A paean to the natural world, Vangelis' "Beautiful Planet Earth" is included in this gorgeous production that revels in the natural environment as it exists with us in this moment. Vangelis has been celebrating our planet and its creatures with music for over 45 years now, and as the hymn begins to fade and its notes dim, perhaps now we shall conscript it to memory?

L'Apocalypse Des Animaux is Vangelis' masterpiece recording for a French ecological/wildlife film documentary series by director Frederic Rossif, produced in 1972. Over forty years have gone by since the recording of the remarkable beauty of each of the tracks that make up this, Vangelis' second solo album, after leaving the progressive rock band, Aphrodite's Child.

Especially poignant are the atmospheric 10-minute epic, "Creation du Monde" (Creation of the World), the liquid "La Mer Recommence" (The sea begins once again) and the three most luminous tracks of the album: "La Mort du Loup" (The death of the wolf), "Le singe bleu" (The blue monkey) and one of Vangelis' most eternal works, "La Petite Fille de la Mer" (The little girl from the sea.)

Hymne is a resplendent track in the Opera Sauvage (L'Enfant) released in 1979 as the score for the nature documentary by the same title, again by French filmmaker Rossif. Years ago,“Hymne” was used by a Barilla commercial in Italy.Since then, it became the “Barilla song” for all things Italian, as well as for a Gallo wine commercial in the US in the 1980's.

This music penetrates our consciousness with the harmonic flows of natural rhythm and its rich textures, now beginning to thin and fray. As these notes echo and fade into the dimmer recesses of memory, we come starkly to the realization of what we have wrought and its implications for the future of life as we know it. Scientists, who have documented these changes and their human sources for decades, are now sharing their grieving process. Their failure to give a vehement, clear voice to the lost regenerative power of natural things has hurt deeply.

"I don't know of a single scientist that's not having an emotional reaction to what is being lost," Parmesan said in the National Wildlife Federation's 2012 report. "It's gotten to be so depressing that I'm not sure I'm going to go back to this particular site again," she said in reference to an ocean reef she had studied since 2002, "because I just know I'm going to see more and more of the coral dead, and bleached, and covered with brown algae."