The Measure of Drought 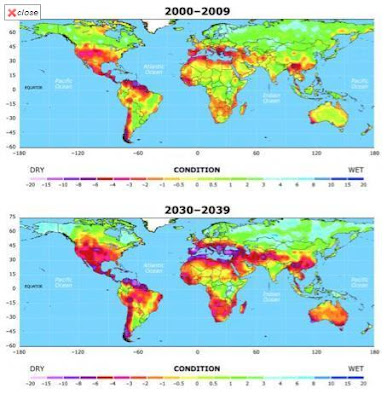 Our one-degree warmed planet is deteriorating rapidly. That's a .85C temperature increase since 1880, following the impact of the industrial revolution. We're on the path to 4C right now. Oceans are rising, and the sea is becoming too acidic to support abundant sea life.

Along with the rapid ice melt in the Arctic and Antarctic including the scientific studies of the ice shelf collapses, there is much documentation now of the rapid impact of drought conditions in the recent past and now-imminent future. A summary of data is updated at the NOAA National Centers for Environmental Information. There's no question that the man-made climate change from fossil fuel use has triggered the collapse of the global ecosphere and set off the runaway climate change that is fueled by natural processes of carbon and methane emissions. NASA is comprehensively compiling the data that will allow us to watch our planet extinguish its life processes.

Looking down into some of the regional biospheres and how they're enduring under the global heating of the planet from carbon emissions turns up many articles examining local conditions in 2015:

All of this so that these destructive fossil fuel companies can continue to make their profits, enabled by the worldwide governmental subsidies of fossil fuels at their disposal. The drastic impact on a universal by-right resource is simply expendable to these entities. As Bill McKibben posits in his summary of Laudato Si:

Take water, which the pope addresses at length. We probably should not need his words to know that “access to safe drinkable water is a basic and universal human right, since it is essential to human survival.” We all know it should not be wasted, and yet we continue to waste it because doing so is beneficial to the rich and powerful: for instance, insurance companies have planted enormous almond groves across California in recent years even as water supplies have started to shrink, and agribusiness planters have drawn down the aquifers of the Midwest.

The global water crisis has triggered a conference on this issue. World leaders, water experts and development professionals have gathered in Stockholm to discuss and jointly find solutions to the world's several escalating water crises.The 2015 World Water Week, themed Water for Development, welcomes over 3,000 participants from more than 120 countries to the Swedish capital, representing governments, academia, international organizations, civil society, the corporate sector, and many others.

Update 4/5/16: The current instability and unpredictability of the world water cycle is here to stay

Update 5/5/16: World on 'Catastrophic' Path to Run Out of Fresh Water