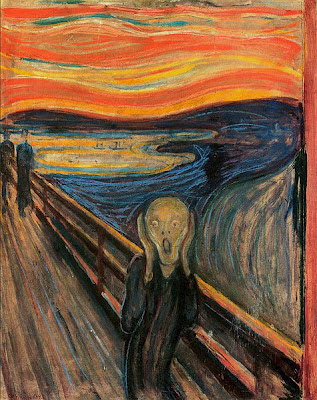 We're watching the impact of global climate change in the northern hemisphere this year, and the consequences of it are frightening. Looking to the future, its impact is going to increase dramatically, leaving the next generation with little to live for. Prof Sir Bob Watson says that any hope of restricting the average temperature rise to 2C is "out the window". He said that the rise could be as high as 5C - with dire consequences for all of us.

As of right now, each country's share of global carbon emissions in 2008 data represents millions of metric tons of carbon dioxide emissions that show no sign of abating. This chart and other resources is from the Union of Concerned Scientists. What is keeping us trapped here? Some of it is the dynamics of US and global power structures.

An excerpt from mi2g, an information storage and management company that pioneers global risk management practices and technology applications lays it out:

It should be kept in mind that the Kyoto Accord taught President Clinton, and the rest of the world as well, that no US President has the power to negotiate and approve an agreement that would have the effect of changing US laws and circumscribing the authority of Congress. When Vice President Gore flew to Kyoto to consummate an environmental agreement the initial news throughout the world was that an historic breakthrough in global cooperation had been achieved. Instead, the Congress reacted by advising President Clinton that he should not seek Senate approval.

At the time of Congressional inaction on the Kyoto Accord, much blame was assigned to the reluctance of countries like China and India to participate. Congressional politicians argued that the US could not limit its own economy when other major world polluters were free to continue without restraint. Frankly, this was a convenient excuse for Congressional reluctance to act, but it was not the only reason for inaction. This rejection was not simply a matter of Republican reluctance. The “Blue” Democratic states of the US industrial heartland and Democrats in the states mining coal and producing oil and gas could not accept that accord. An open vote would have become a huge political embarrassment to President Clinton as well as to Vice President Gore. In subsequent years, President George W Bush received the same advice from Senate leaders, so he simply avoided addressing the Kyoto accord in the same way as President Clinton had done, by ignoring it.

And with respect to the top-level corporate systems which brought the global investment banking system to its knees, and which are in control of Congress, we have a report from the IFG:

The International Forum on Globalization (IFG) released a special report on Dec. 6, 2011, “Outing the Oligarchy: Billionaires Who Benefit From Today’s Climate Crisis,” which identifies the world’s top 50 individuals whose investments benefit from climate change and whose influence networks block efforts to phase out pollution from fossil fuels.Little information has been publicly available about the identities of the industrialists, investors and ideologues who are most responsible for the decisions over carbon-intensive activities that drive greenhouse gas emissions far past danger levels.IFG’s new report brings this information to light. The task of calculating carbon decision-making footprints is highly complex. However, IFG’s new study is an initial step in what will be a longer-term initiative of analyzing the roles played by the planet’s worst carbon culprits and how they fund sophisticated influence networks over almost all aspects of government policymaking, especially energy.

The online previews are here.

And the dirty little political backstory is here.
Posted by LPB at 1:00 AM 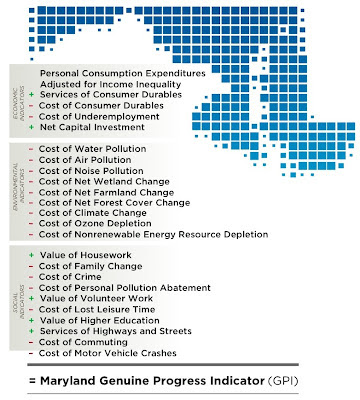 This "work" in climate change action refers to the final step in the six stages of grief, as outlined by Daphne Wysham. It appends the traditional five steps of grief, as originally described by Elisabeth Kubler-Ross, and adapted by Steven Running with a final step in the process which calls for appropriate response to the acceptance of a lethal global problem.

This becomes a call to adapt a different benchmark for health and success on a global scale. Specifically, it is about replacing the outmoded and destructive measure of GDP with a measure that recognizes all risks and impacts of business, environment and public policy. This measure is proposed as GPI, and it is laid out extensively in this article from The Solutions Journal.

The state of Maryland has developed a Genuine Progress Indicator as a model for implementation. It's an accounting change that forces the negative impacts onto the balance sheet, and thus doesn't rely on monetary compensations for carbon emissions, but rather fundamental and behavioral and economic changes. This affects corporate behavior at a basic accounting level, which is the necessary means of changing the destructive nature of human habitation which is currently based upon a false metric.

Global implementation of this metric, preferably within regional groups, would put the world back on a path to ecological salvation. The benchmarks provided by C&C would establish a fair set of guidelines. This needs to be done soon, before the escalation of carbon emissions runs out of control. 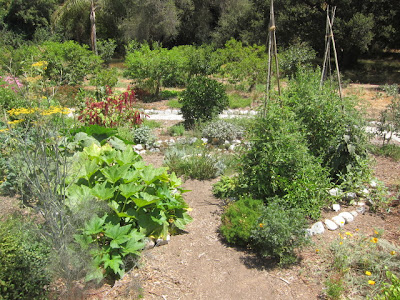 A trend has taken hold in California and our local communities that brings our culture closer to that of Europe's traditions. Urban farming, taking the form of fruit and vegetable produce as well as bees, chickens and goats, has started to blossom. The idea has gone beyond the P-patch communal urban plot originally out of Seattle, Washington. The "P" stood for "Picardo", after the family who owned Picardo Farm in Seattle's Wedgwood neighborhood, part of which became the first P-Patch.

Locally, Los Angeles County has reversed its position on excluding urban farming, mostly because of its outdated rigid zoning ordinances, and is developing guidelines for this practice. The City of Los Angeles is drafting ordinances, as well. Eric Garcetti, a councilmember and gardener, pushed for the amendment to the city's General Plan that allows these urban gardens to flourish.

In San Gabriel, Jennifer Little is now farming on her property:

Little’s business model is so rare in Los Angeles that the coordinator for a study she’s participating in on urban agriculture through the UC Extension Program often tells her that there’s hardly anyone else in the city doing what she does. She wonders if that might mean she’s “crazy, or revolutionary.” “There are lots of great things about being an urban farmer,” she said. “For one, it's really nice to be home together all the time. Also it feels really good to work hard all day in the dirt with the sun beating down on you, and even though we don't make much money, we know we earn every penny.”

Even very small communities are getting into the act. San Marino has started an ordinance to allow raising chickens on property in a very exclusive residential community. The precedent here, however, is embodied in the Huntington Library in San Marino, which goes back to the local agricultural heritage in Southern California. It celebrates its food production in The Ranch, which is part of the estate grounds, and there is still a small section of orange groves around the Huntington mausoleum that was part of the citrus fruit industry that was established all over Southern California in the last century.

Pasadena's contribution to the local garden movement is Arlington Garden, a public garden on leased Cal Trans property. It was the site of the opulent, 17,000-square-foot Durand Mansion built in 1901 and demolished in the early 1960s. After Cal Trans acquired the property, it stood vacant for 40 years. In 2003 Councilmember Steve Madison and former city manager Cynthia Kurtz approached Caltrans about the possibility of leasing the property for city purposes. Madison hosted several community meetings in 2004 during which residents gave input on potential uses ranging from active recreation, such as soccer fields, to passive use, such as a park. The Mediterranean garden eventually arose as the final citizen concept, and is open to the public.

The trend, spurred by public rejection of corporate farming, imported foods and GMO crops, is an example of citizens taking back control of the renewal of their public and urban spaces for the common good. It also provides a future hedge against the looming food shortages of climate change. Forward-looking cities and regions are discussing strategies for adaptation to a hotter and more crowded planet.