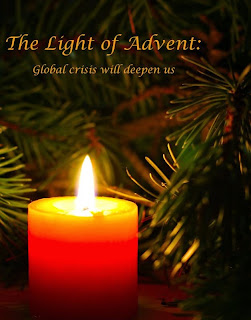 The season of Advent is a quiet Christian meditation on the event of the dawning light of 2000 years ago, symbolized by the lighting of candles on a wreath. Most consider lighting of the first candle to symbolize expectation, called Emmanuel, while the second symbolizes hope, the third joy and the fourth purity. A central candle is lit on the 25th of December in a moment of reverence, as the ascendant light.

As people and governments participating in COP 23 across the globe begin to coalesce into a center of consensus, it's now clear that time grows short to achieve the goals of reducing emissions and pollution in time to forestall the worst ravages of climate change. From coalitions of local governments providing leadership, musicians and scientists acting in concert, the building industry, energy and power suppliers, agriculture and fishing, to the focus on the UN 2030 Agenda, the chorus is rising among the people of our world to animate global climate change response.

ClimateKeys is a local UK initiative launching with over thirty concerts in nine countries during October & November 2017 to raise public engagement with COP23, the 2017 UN climate talks that took place in November. ClimateKeys, founded by Markson Pianos Composer-in-Residence pianist Lola Perrin, features concert pianists and climate change experts collaborating in performances that include a conversation with the audience about positive response to climate change.To date, over a hundred concert musicians and guest speakers in twenty countries have joined ClimateKeys. More concerts are being planned through 2018. A discussion from the UN of its public engagement shows how the UN brings together musicians and climate experts. Their worldwide synopses of talks about climate change take place all over the world, even in the USA.

Paul Hawken has compiled a comprehensive reference book on widely available emission reduction solutions, called Project Drawdown. It examines the actual impact of carbon emissions reduction from all available technologies. Project Drawdown is the most comprehensive plan ever proposed to reverse global warming. Paul Hawken did not make or devise the plan—he found the plan because it already exists. He gathered a qualified and diverse group of researchers from around the world to identify, research, and model the 100 most substantive, existing solutions to address climate change. What was uncovered is a path forward that can roll back global warming within thirty years. It shows that humanity has the means at hand. Nothing new needs to be invented. The solutions are in place and in action. Their work is to accelerate the knowledge and growth of what is possible. The name Drawdown was chosen because if we do not name the goal, we are unlikely to achieve it.

The light of Emmanuel is the light of knowledge and expectation, the knowing that the work is ahead of us, and understanding that we're now on its path.

Update 11/29/17:  ClimateTECH: decarbonization is a transformation

Update 12/21/17: Visualizing a future based on different principles

Update 1/22/18: Well-Being Economy Alliance: It's Going to Take a New Economy to Save the Planet 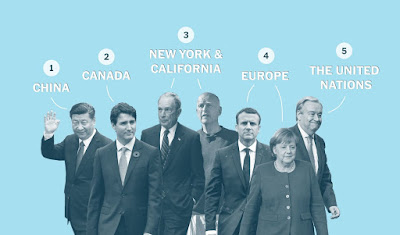 COP23 in Bonn has concluded, and the discussions managed to negotiate outcomes agreed to at the UN climate talks. This article by Jocelyn Timperley of Carbon Brief is a succinct summary of the proceedings. She notes a significant comment by  Mohamed Adow, international climate lead at Christian Aid London : "The days when you looked to one country to be able to actually lead the transition are gone. We’re now in a new era, where we are actually seeing more shared distributed leadership emerging, where 200 countries have collectively contributed to the global effort." So the process has now become far more consensus-based.

In another article from Bianca Jagger for Huffpost, the emphasis is that the stakes at COP23 are higher than ever, and time is running out.  At COP 23, James Hansen provided a strong pronouncement on the urgency of the climate change situation, and took clear and unequivocal scientific positions on the danger that the planet is in. This video of his Nov.10 press conference, Scientific Reticence: A Threat to Humanity and Nature, records Jim Hansen, Pam Pearson and Philip Duffy in a dialogue about the rapidly escalating temperatures in the arctic. Their stance is that legal avenues need to be pursued to force goals that reflect science with actions that ensure that the limit of 1.5C temperature is not exceeded, per the agreement struck at COP 21 in Paris.

The big question at COP 23 was the question of who would step into the leadership role that the United States has abdicated on climate change. Perhaps no group has made a bigger splash on the world stage this year than the coalition of United States governors, mayors and businesses who call themselves We Are Still In coalition. Informally led by Gov. Jerry Brown of California; Michael Bloomberg, the former mayor of New York, and Gov. Jay Inslee of Washington, the group has vowed to uphold the Paris agreement and move ahead with policies to fight climate change.This group of state and local officials are determined to begin implementing strategies that bring US emissions to net zero in the near future. It's a big challenge, not just because of Trump's intransigence on the subject, but also the uphill battle with the fossil fuel majors. The tragedy of this is that we're already in the process of ramping up emissions, when we should be moving as quickly as possible to zero. This is why it's critically important to use accurate, scientific data and measurements to make the substance of the negotiations actually work to prevent runaway climate change.

The WMO Greenhouse Gas Bulletin reports on atmospheric concentrations of greenhouse gases. Emissions represent what goes into the atmosphere. Concentrations represent what remains in the atmosphere after the complex system of interactions between the atmosphere, biosphere, cryosphere and the oceans. About a quarter of the total emissions is taken up by the oceans and another quarter by the biosphere, reducing in this way the amount of CO2 in the atmosphere. A separate Emissions Gap Report by UN Environment, released on October 31, tracks the policy commitments made by countries to reduce greenhouse gas emissions and analyses how these policies will translate into emissions reductions through 2030, clearly outlining the emissions gap and what it would take to bridge it.

"The numbers don't lie. We are still emitting far too much and this needs to be reversed. The last few years have seen enormous uptake of renewable energy, but we must now redouble our efforts to ensure these new low-carbon technologies are able to thrive. We have many of the solutions already to address this challenge. What we need now is global political will and a new sense of urgency," said Erik Solheim, head of UN Environment.

Together, the Greenhouse Gas Bulletin and Emissions Gap Report provided a scientific base for decision-making at the UN climate change negotiations.

Update 11/20/17: Nations have agreed to launch the next steps toward higher climate action ambition before 2020