FLLW: Nature is my manifestation of God 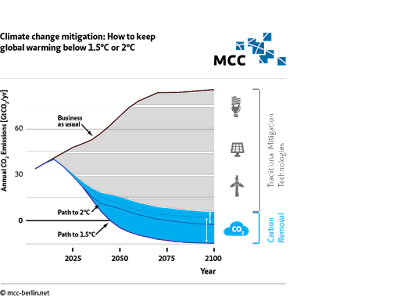 An article from the Mercator Research Institute on Global Commons and Climate Change discusses the means by which we could now limit climate change to 1.5°C , employing the chart shown above. It shows six carbon dioxide removal strategies, including afforestation and reforestation. It will be a major struggle to pull it off without employing some form of technological carbon capture. So in other words, we not only need to leave all the fossil fuels in the ground, starting immediately, but also absorb most of the carbon we've released in the last 50 years. But according to the latest issue of Science magazine, which is devoted to forest health, every major forest biome is struggling. While each region suffers from unique pressures, the underlying thread that connects them all is undeniably human activity. Deforestation is changing our climate.

We need to immediately stop the destruction of forests and watersheds, and find ways to restore them. Understanding how they work as an ecosystem is an important first step. Scientists that study biology and horticulture know that plants talk to each other and communicate using an internet of fungus. “Mother Trees” use fungal communication systems to preserve forests in a mutual cooperation strategy. Suzanne Simard has developed this approach for decades. Her TED Talk, How Trees Talk To Each Other, is here.

We also need to provide for a diversity of the forest ecosystem, which is an important component of its system resiliency. Biodiversity and complexity are anti-entropic. Science Magazine examines this in a special issue: "Forest health in a changing world." Preservation of global ecology and a Green New Deal will be critical to drastically reducing the global carbon emissions.

Regeneration and expansion of our urban forests can be another key approach to creating carbon sinks. Provide landscaped environments in places where the land has been paved over and the forests plowed under. Restoration of functional green areas and watersheds in the urban heart of a city can be key to its financial regeneration as well, such as the Master Plan for the Los Angeles River Revitalization currently underway.