Music has a unique capacity to move us, its harmonics resonating through our emotional centers and releasing the energies of the mind as well as the flesh. This kind of shared experience has the capacity to move us beyond our normal boundaries and engage us in a dynamic flow that becomes greater than the sum of its parts. Maybe this is the kind of experience that precedes and then builds the necessary synergy for reaching consensus on our human issues.

This idea was expressed long ago by William Congreve, in The Mourning Bride, 1697:

Musick has Charms to sooth a savage Breast,
To soften Rocks, or bend a knotted Oak.
I've read, that things inanimate have mov'd,
And, as with living Souls, have been inform'd,
By Magick Numbers and persuasive Sound.
What then am I? Am I more senseless grown
Than Trees, or Flint? O force of constant Woe!
'Tis not in Harmony to calm my Griefs.
Anselmo sleeps, and is at Peace; last Night
The silent Tomb receiv'd the good Old King;
He and his Sorrows now are safely lodg'd
Within its cold, but hospitable Bosom.
Why am not I at Peace?

A Fifth Year, Now Without Rain 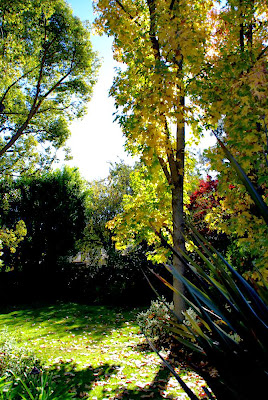 We've entered a period of drought here in the Southwest; last year's record dry winter appears to be the new normal. This pattern has been predicted by the climate models, and so here we are. Planning is in place now with appointments at the State level for a drought management team:

U.S. Sen. Dianne Feinstein and Rep. Jim Costa (D-16) on Dec. 9 sent a joint letter to Gov. Jerry Brown asking him to declare a statewide drought emergency that would activate the state’s emergency plan and permit some relaxation of state regulations concerning water. Cowin hinted a drought declaration could be coming.

There's more to consider than just the economics and logistical problems of water scarcity. We have forests and an urban biosphere that are severely stressed already. The ecology of forests and their complexity rely upon sufficient water and soil humidity to maintain the forest structure and underground water and nutrients. During droughts, the resiliency of these forests and landscaping are greatly reduced, and the recovery is a slow and complex process, potentially threatening its viability. A video from the University of British Columbia examines the nature of this integration of the living forest.

In this real-life model of forest resilience and regeneration, Professor Suzanne Simard shows that all trees in a forest ecosystem are interconnected, with the largest, oldest, "mother trees" serving as hubs. The underground exchange of nutrients increases the survival of younger trees linked into the network of old trees. Amazingly, we find that in a forest, 1+1 equals more than 2.

Update Dec. 21, 2013: There's a reason for that.
The extraordinary California dry spell continues: 2013 will probably be the driest year on record (from California Weather Blog)

Joy to the World


From NASA's Earth Observatory (where every day is Earth Day) comes images in a new video from film student David Peterson, posted Dec.3, 2013. His goal with this new video is to bring more attention to the station itself, including the humans aboard it, particularly astronaut Don Pettit, who appears in the video's final shot and took many of the sequences used in the video.

Two years ago Peterson posted a time-lapse video montage to his YouTube page that was based on imagery of aurora and night lights captured by NASA astronauts. That video (All Alone in the Night) had racked up more than 6 million views by December 2013.

Isn't it just a damn shame that with all of our tremendous intelligence, ingenuity and perceptiveness, that we're destroying this incredible, beautiful planet with our dirty oil-clogged machines, pollution and radioactive waste? By about 2030  (credit - GCI).
Posted by LPB at 1:00 AM 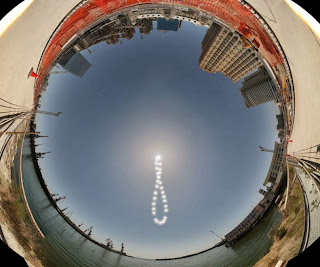 Upon this Advent season, consensus has begun to illuminate the world dialogue on climate change. On the 19th of November UNFCC, IPCC, IGBP, co-posted a short film reprising the Policy Makers Summary of IPCC AR5 WG1. This group comprises the representative scientific global public policy group on 'climate science and policy', and it's unprecedented for them to co-publish any policy statement.The established absolute limit, from scientific research and study, is for perpetuity the most stringent of the carbon-budgets published in IPCC AR5 WG1 in September 2013.

Their film ends with a comment affirming that global contraction budget limit to future emissions is '250 Billion Tonnes', if the 2 degree limit to global warming is to be held. GCI's file compares this limit to the one previously established by the UK Climate Act. The group recognizes that emissions ‘contraction’ should be complete globally by 2050 if, once ‘feedback effects’ are included, we are to give better than 50:50 odds for keeping within the 2° rise. This is a critical, critical illumination of the scope of the world problem that threatens our existence: a total global emissions cap of 250 Gt C, accomplished by 2050.

The challenge to all of us is very simple, very clear, and the time is now.