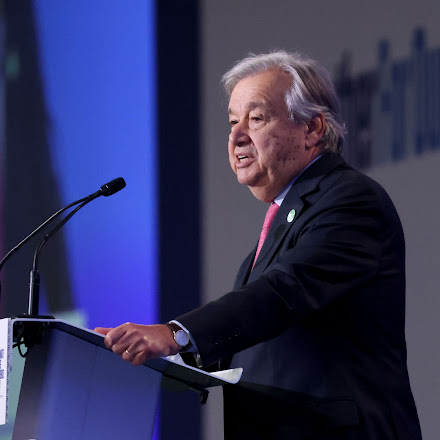 UN Secretary General Antonio Guterres has announced a new flagship UN report on climate change, indicating that harmful carbon emissions from 2010-2019 have never been higher in human history. This is proof that the world is on a “fast track” to disaster, António Guterres has warned, with scientists arguing that it’s ‘now or never’ to limit global warming to 1.5 degrees.

His latest statement opens with:

"We are on a pathway to global warming of more than double the 1.5-degree limit agreed in Paris.
Some government and business leaders are saying one thing – but doing another.
Simply put, they are lying.
And the results will be catastrophic.
This is a climate emergency."

In an op-ed article penned for the Washington Post, Mr. Guterres described the latest IPCC report as "a litany of broken climate promises", which revealed a "yawning gap between climate pledges, and reality." This is a major wakeup call for the governments of the world, which need to begin immediate actions on carbon emissions because many current carbon sources are not accounted for. The collective pledges so far would mean a 14 percent increase in emissions.

This plea to the world sets the stage for more urgency of action on carbon emissions, and a political imperative to look at the issue of how all countries of the globe must make drastic reductions in fossil fuel use. There are also questions as to whether the analysis of carbon emissions is accurate, because many of the revised scenarios are projecting more emissions when the models are analyzed, using more data and accounting for a more complete synthesis of elements not previously considered. We are beginning to see that we have actually surpassed the carbon budgets already, and it will bring about massive destructive events in the ecosystem in the coming years. The veil has been lifted, and we must now deal with those realities. "First and foremost, we must triple the speed of the shift to renewable energy. That means moving investments and subsidies from fossil fuels to renewables, now."