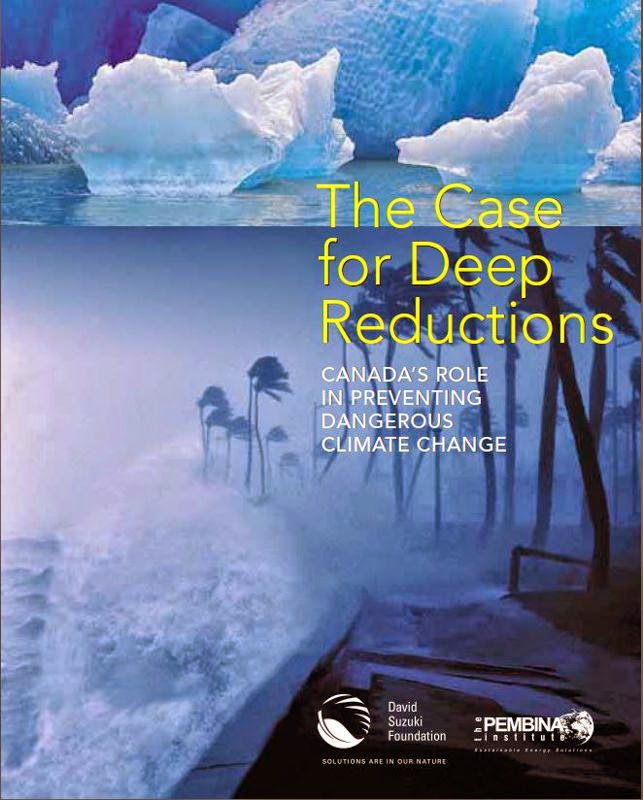 I'm copying an outtake of a section from an urgent report by the David Suzuki Foundation for the Netherlands Environmental Assessment Agency study that calculated emissions trajectories for industrialized countries based on the “contraction and convergence” scheme, in which national per capita emissions converge starting in 2012 until they are equal in 2050.

This scheme is based on the equity principle of equal per capita rights to emit. Industrialized countries’ emission reductions by 2020 are quite similar to those in the “multi-stage approach,” but the reductions by 2050 are significantly more stringent.

Climate change is a long-term problem: the impacts are (for now) appearing gradually,and the emission reductions needed to limit the impacts will take a few decades to achieve.This is because the reductions are very large and are constrained by feasible turnover rates of capital stock such as industrial facilities and transport infrastructure.The long-term nature of the problem, combined with the scale of the efforts needed to solve it and a perception of little immediate electoral benefit from taking action,can deceive decision makers into thinking there is little or no urgency about initiating deep emission reductions. This is a grave error, as well as a failure of leadership. First, more attention needs to be paid to the wide range of climate change impacts that are already being observed. Some of these are already spectacular, especially in the Arctic (see Section 2.2).

Second, the reality is that the emission reductions needed are so large that if they are not initiated immediately by enough countries, the lower levels of stabilization of GHG concentrations will become, for practical purposes, impossible to achieve. The Netherlands Environmental Assessment Agency study cited in Sections 3.1 and 3.2.1 examined this question and found that if the US and developing countries take no action for two decades after 2012, stabilization at even the highest level considered in the study – 550 ppmv CO2e – would require the other industrialized countries to reduce their emissions by about 90% between 1990 and 2025.36 Even if unlimited international emissions trading allowed such countries to meet a 90% emission reduction target by paying for reductions outside their borders, this would clearly not be politically feasible, even if it were economically feasible.

Given the scale of the required reductions in emissions below 1990 levels – let alone below business-as-usual levels – any economically rational (cost minimizing) strategy will immediately initiate an emissions trajectory that leads to deep reductions. A key finding of the International Symposium on the Stabilisation of GHG Concentrations, convened by the UK government in February 2005, was that “even a delay of just five years could be significant. If action to reduce emissions is delayed by 20 years, rates of emission reduction may need to be three to seven times greater to meet the same [global average]temperature target.” It is virtually certain that such dramatically increased rates of emission reduction will carry a high price tag.

As noted in Section 2.1.1, the national science academies of the G8 countries plus China, India and Brazil, have made the same point: “Failure to implement significant reductions in net greenhouse gas emissions now, will make the job much harder in the future.... We urge all nations ... to take prompt action to reduce the causes of climate change.”

If, on the other hand, decisive action is not initiated immediately, as capital stock turns over decisions will continue to be made to invest in infrastructure with potentially enormous GHG emissions and operational lifetimes of decades. Abandoning such infrastructure before the end of its normal lifetime is then very difficult as it leads to large capital losses for investors.

It is also pertinent to recall here the argument presented in Section 2.3.2, that optimal(cost minimizing) behaviour in light of the uncertainty in “climate sensitivity” is to pursue lower concentration objectives than would be optimal if there were no uncertainty because the risk of incurring the high costs of delayed action to correct to a lower target, after the uncertainty is removed, outweighs the costs of early action. Or, as it was put in the UK government study accompanying the Energy White Paper (Section 3.2.1), “‘burn now, pay later’ is a high risk approach.”

This only further reinforces the urgency of initiating deep emission reductions immediately.
Posted by LPB at 1:00 AM

City of the Angels

California has become a key player in the climate change dialogue here in the USA, and Los Angeles provides a main stage for the Obama administration's current west coast fund-raising tour for the DNC.

President Obama was in LA on May 7 for a fundraiser at the home of the chair of Walt Disney Studios, and hundreds of people from the environmental group 350.org mobilized to greet him and say Keystone is Goofy! Outside the fundraiser, this group rallied in opposition to the proposed Keystone XL pipeline. San Diego 350 contends the pipeline, which would carry oil from Canada to Texas for refining, will increase greenhouse gas emissions and worsen the impacts of climate change.

Obama has delayed a decision on whether to approve the project for several months. Meanwhile, in the Senate, a bid by supporters of the proposed Keystone XL oil pipeline to force a vote on the controversial project fell apart Wednesday amid partisan bickering over how the vote should be conducted.

Obama began his trip in Los Angeles on Wednesday evening headlining a joint fundraiser for the Democratic Congressional Campaign Committee and the Democratic Senatorial Campaign Committee at the Bel Air home of Disney Studios head Alan Horn, according to an online invitation. He then headed over to the 20th anniversary gala for the University of Southern California's Shoah Foundation, an institute for visual history and education, hosted by Oscar-winning director Steven Spielberg where he was given an ambassador for humanity award by the organization’s founder Spielberg.There, he made some interesting comments about the limits of his influence in the presidency.

On Thursday Obama heads to the San Jose area for several additional events to raise money for the DNC. One of them will be hosted by Y Combinator President Sam Altman and Yahoo CEO Marissa Mayer, according to an invitation posted at the Sunlight Foundation’s website.

Continuing the White House’s focus on climate change this week, the president will cap his California trip with a speech on energy efficiency Friday morning in San Jose, where he will stress the importance of partnerships between the public and private sector to reduce carbon emissions. The entire administration campaign has been focused on an incremental approach to reduction of carbon emissions, with the strong partnership of California and its key cities. Having just released the key National Climate Assessment yesterday, the administration is building strong financial and political support for this platform, which is that climate change is already happening and that drastic action is called for.

A video and transcript of the State of the Climate presentation from The White House is available. Participants include the US Global Change Research Program which houses the National Climate Assessment. This program is now affiliated with the White House Office of Science and Technology Policy at the White House. They are working in concert with NOAA to prepare US citizens for the destructive effects of climate change. They can be reached at #ActOnClimate