Bending the Arc of Justice 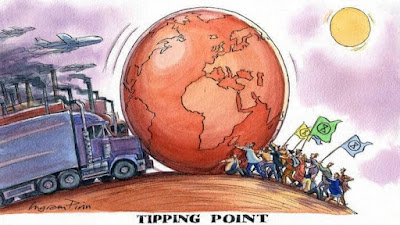 From the inspiration of Earth Day in the writings and activism of Rachel Carson in her epic Silent Spring documentation to the present-day confrontational actions between the corporate power of profit versus the Extinction Rebellion - portrayed in the graphic above from FT - we have seen Earth Day evolve extensively from its first recognition in 1970. During that time, we have seen 24 COP's come and go; the first COP was held in Berlin in 1995.

This reflects the global turbulence among countries, governments and corporate powers that are all staking a claim on planet earth, resulting in a human-induced crisis of resources, humanity and the very life systems of our environment. In the last few hundred years we've gone beyond our natural limits and show no signs of stopping carbon emissions in spite of all the agreements and discussions to date. Hence, the increasing tragedy of future environmental collapse, and the resistance personified by children like Greta and the powerful counter movements emerging as the alarms are set off by more and more people seeing an unfolding terrible, dark future.

According to a NYTimes report, more carbon has been released into the atmosphere since the final day of the Noordwijk conference, Nov. 7, 1989, than in the entire history of civilization preceding it. In 1990, humankind emitted more than 20 billion metric tons of carbon dioxide. By 2017, the figure had risen to 32.5 billion metric tons, a record. Despite every action taken since the Charney report — the billions of dollars invested in research, the nonbinding treaties, the investments in renewable energy — the only number that counts, the total quantity of global greenhouse gas emitted per year, has continued its inexorable rise.

Like the scientific story, the political story hasn’t changed greatly, except in its particulars. Even some of the nations that pushed hardest for climate policy have failed to honor their own commitments. When it comes to our own nation, which has failed to make any binding commitments whatsoever, the dominant narrative for the last quarter century has concerned the efforts of the fossil-fuel industries to suppress science, confuse public knowledge and bribe politicians.

Because our destructive, profit-focused economic system demands a fiction called GDP that requires physical consumption to increase the ledger sheet balance, the system inherently grows out of control as the markets are expanded. Destroying the environment that provides our life support is a form of insanity that leads to collapse, and that is increasingly recognized now by people all over the world, as well as by governments and the insurance industry. A view delineating this is: Collapse of Industrial Civilization ~ Finding the Truth behind the American Hologram Concerning Humanity’s Future: Interview with Nick Humphrey, Climatologist and Geoscientist. Nick makes the critical point that Nature is in control, not humans. Even our current catastrophes which were sparked by humanity’s activities were ultimately governed by the laws of Nature (physics, thermodynamics, chemistry, etc). We never were separate from it all, but a part of it. We should be telling ourselves to do what we feel is right to respect Nature and its unbreakable laws, accepting our place in the Universe as just one of many species which have a finite existence on this planet.

The enormous effort that it will take for the all the civilizations of the world to stop the self-destruction and change the entire system in time to stave off the worst impacts appear to be unachievable at this point, especially given the rise of demagogues and rampant corruption in many countries, including the US, that block even the efforts by corporations and individuals to change this systemic self-destruction. We have reached our day of reckoning, which was actually five years ago with the issuance of the IPCC's AR5 fifth assessment report, Part 2, ahead of the Paris Climate Summit.

As Chris Hays put it, Martin Luther King's idea that the moral universe inherently bends towards justice is inspiring. ... "The arc of the moral universe is long, but it bends towards justice." It means that all of us together will have to bend it with revolutionary fervor, not just foster incremental steps. The time has come, even as the natural world inflicts its wrath upon our efforts to salvage a future for ourselves and our kids.