A Different Take On It

Just for fun, looking at it as a spiral vortex. Part 2 of this video is here.
There's a critique of it, too. And then, another view:

This is a Venus-Centered view of the Earth:Venus:Sun cycle where 8 Earth-Years equal 13 Venus-Years with 5 Venus:Earth 'kisses' [apogee-moments] during that time. The music is the first movement of the Trio for Viola, Clarinet and Piano [wr A Meyer; performed by Rusen Gunes, Bob Hill, Amanda [?] at the 'Purcell Room' on London's 'South Bank' July 1985.

We're taking the long view now because of the Global People's Climate March, September 21, 2014, across the planet. It's a disruptive campaign, meant to focus attention on the need for immediate action on drastically reducing carbon emissions by all countries.

This is ahead of the UN Climate Summit in NYC, September 23, where Countries have agreed on the need for a meaningful, robust, universal, legal climate agreement by 2015. The Secretary-General is convening the 2014 Climate Summit to mobilize action ahead of 2015 and to increase political will for greater action and ambition.

It forces us to look beyond the short-term and destructive view of our civilization and planetary ecosystems, and understand that we're part of a harmonic whole. It's the only way to forge the agreements that will allow the regenerative cycles to take hold. 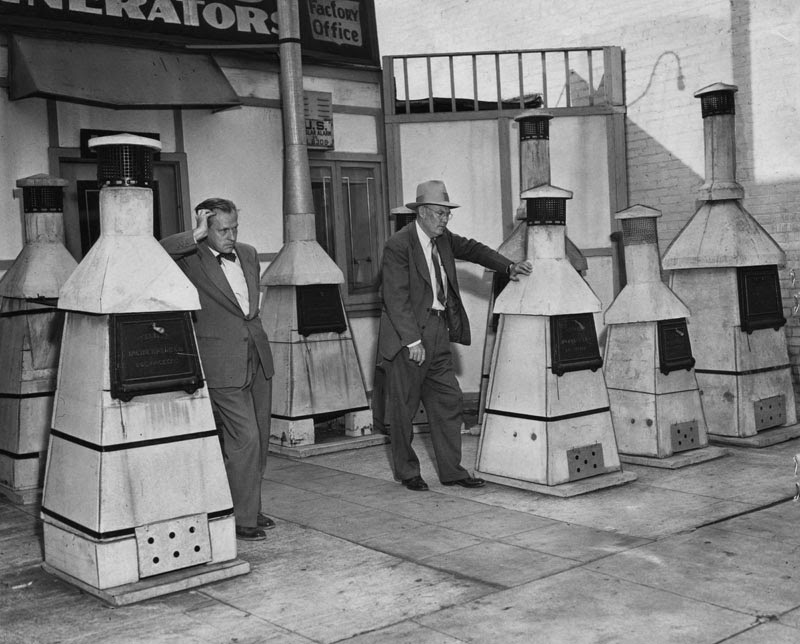 In the photo above, W.G. Nye and Loy E. Moore, owners of the Peerless Incinerator Company, display their inventory of backyard incinerators as they hear reports of banning all incinerators. "We're convinced we're being made the goats for some other industry," said Moore, Oct. 20, 1954. Incinerators were finally banned in So Cal on Oct. 1, 1957, and people had to tear them out. Then the trash collection industry went into business, bigtime. Previously only food garbage was picked up. This was before electric garbage disposals were installed in kitchen sinks and changed the habits around food waste, as well.

A very complete article is here, and you'll find the history of trash, going forward, here.

By 1956, Los Angeles County had started to phase in trash collection in areas where incinerator use was being phased out. A total ban on incinerators was in place by October 1, 1957. Thus the death of one industry, backyard trash incineration, gave birth to a massive new one. The public safety issue of pollution in the Los Angeles basin had trumped the "politics as usual" around the smokestack industries because of the obvious pollution impacts on human health and the environment. This legislative route to zero is a good precedent for the methodology that will be needed to phase out fossil fuels in order to get to zero by 2050.

The practical impact of going to zero on fossil fuels will require a layered system of "zero points" on carbon emissions for various fuels. Based upon the weight of carbon emissions, it's necessary to phase out the heaviest fuels first as the transition is made to renewable and zero-carbon fuels. The carbon limits on fuels can be layered so that the most rapid cutbacks are mandated by zero emissions per fuel type by weight of carbon. This can be a VERY effective system in the management of the convergence of emissions if they're adopted globally, based upon a system such as Contraction & Convergence, with the contraction year set at 2020.

For example, in the scenario where the global budget is equitably distributed at RCP 2.6, the "zero year" for these fuels are established as 2020 for coal, 2025 for fracked gas, 2030 for oil, and 2050 for natural gas. The other fuels, wind/wave/solar/geothermal/hydroelectric/algae/ethanol, have no zero date, and thus are the targets for long-term investment strategies.

Setting up a rough chart for this, the height of the carbon emission bar chart of carbon per unit of energy is taken from the EIA page. 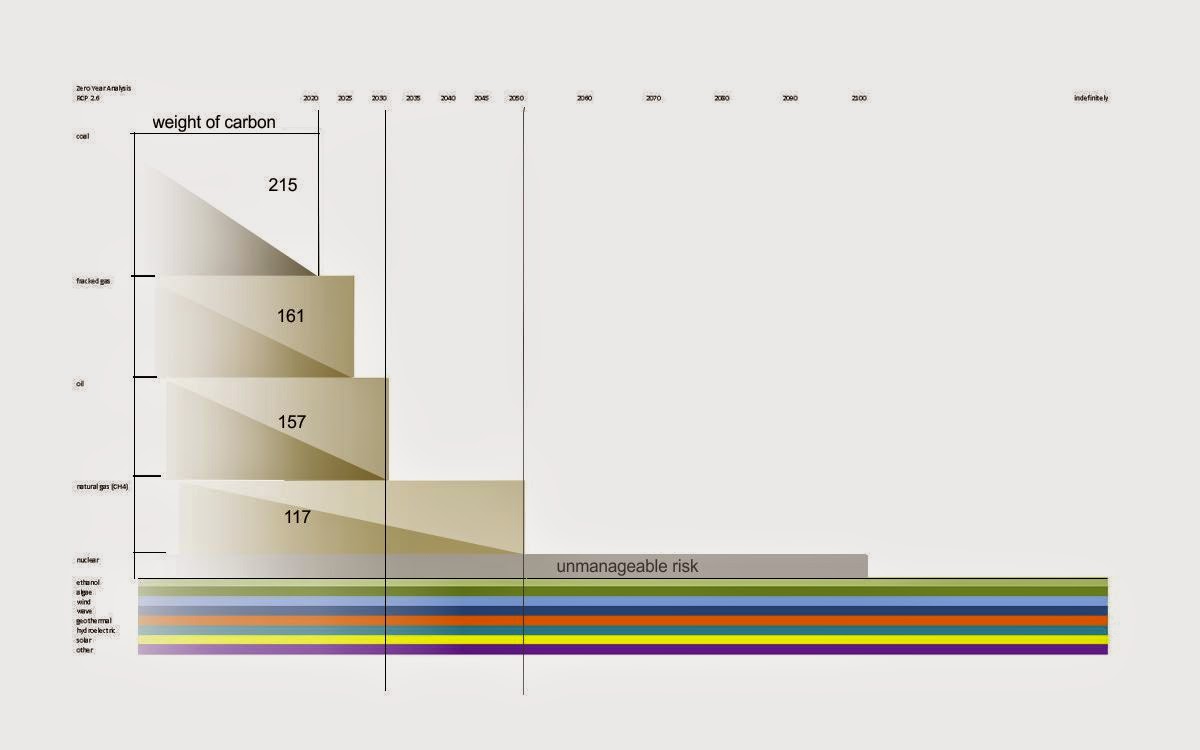 What this does is tell the global industries and investors the timeline allowed to taper to zero for each fuel under RCP 2.6 so that we don't exceed 2C in our ecosphere; this is the stability needed to get off of carbon sources and move to clean energy with exceedingly rapid investment and development. So the chart for the convergence sequence implementation starts to look like this. The rapidity with which the carbon is reduced is quite revealing, and using sequential zero years shows that this can be very effective, just as it was in Los Angeles in the 1960's and '70's and the air began to clear significantly. 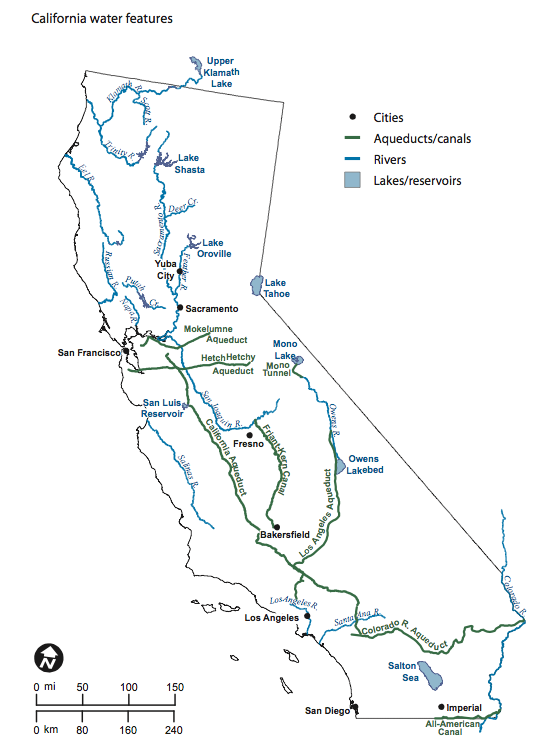 The map above outlines the basic water supply issue in California. It's a massive system of hydraulic engineering developed since over 100 years ago to bring water into the drier areas of the state. While it supplements groundwater supplies and rainwater, it's a system that has been aging in an increasingly dry climate. There's much higher cost for this processed water, vs. the groundwater via wells; this is the expensive State Water Project (California Aqueduct via the Bay Delta) and Colorado River Aqueduct, which import water over huge distances. Los Angeles also has its own aqueduct from the Owens River.

Increasing water needs rely upon rebuilding and renovating the levees in the Bay Delta in order to prop up the heart of this aging water system in the state of California, which is vulnerable to drought and earthquakes. This year the State Water Project has limited allocations to nearly zero as the drought impacts water supplies.

Farming operations get the majority of the water. California agriculture uses about 80% of our water but provides only 5% of economic output. Humans drink less than one gallon of water per day, but livestock consumes up to 23 times that amount of water a day per animal, according to a North Dakota State University study. That’s a huge amount of water to keep millions of animals alive.The ongoing drought and shifts in federal policy are only making water more expensive. The ag farming practices of flooding vast tracts of rice fields and almond trees for export have also become unsustainable, according to the California Progress Report, basing it on subsidized water to the detriment of California's environmental and economic future. This has created a political and environmental issue around the Bay Delta.

So, finally after a couple of political cycles, the legislature has produced a new version of a water bond to address some of these issues, after subtracting lots of Steinberg pork at Jerry Brown's behest. The new version of the water bond approved by the legislature for November ballot excludes previously proposed water tunnels in the Delta. Because of these complexities, and the massive groundwater depletion resulting from these earlier practices, Sacramento is also developing regulation of underground water for the first time, so that wealthy corporations can't drain a common aquifer that supplies many different cities and farms. The wild, wild west has finally been tamed.

Many cities are now looking beyond groundwater, surface water and imported water, and are developing reclamation systems for existing water. This is a relatively new and very expensive approach to making up for the lack of snowpack and rain in this new climate. It's also affecting the building and development industry, since new subdivisions can't go in due to lack of water supplies, which are already vastly oversubscribed. The Los Angeles DWP and the region is looking at water recycling projects:

Because of this current drought, which is a 100-year event that could last for several decades, California is now facing the biggest challenge the state has had since before it was founded in 1850. Critical cooperation between the water agencies and big users will have to take place. Climate change has come home to roost.

Update 9/08/14: Delta Stewardship Council Seminar -  Expanding desalination capacity along the California coast raises a variety of environmental, social, and economic questions, many of which are not fully answered.

Update 9/25/14: The Associated Press reported the area’s regional water supplier, the Metropolitan Water District of Southern California, could be without reserves by early 2016

Update 1/12/15: The California Drought: Who Gets the Water and Who's Hung Out to Dry? Photoessay from EarthJustice

Update 4/24/15:  Drying Up: The Race to Save California From Drought, Newsweek