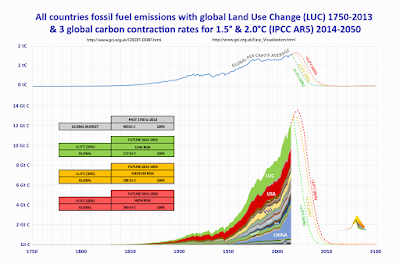 This blog is still comprehensively following an issue that erupted in 2013, and has now grown substantially with the revelation of the Panama Papers and the Paradise Papers. The impact of this corruption, legal and extralegal, is to undermine the living systems of this planet by the ownership of the vast majority of its resources by the global one percent of wealthy individuals. It's the vision of unlimited growth that drains the resources from people and the planet with expanding extractive, manufacturing and distribution activities.

You can see, from a timelapse video in which Google unveils a 3-decade span of the Earth's envelopment by human habitation, that this destruction is relentless. A charted representation of this time lapse of expanding human occupation and its cumulative emissions is also shown in the green LUC area of Aubrey Meyer's chart,above. Its impact is massive, as big as the USA.

It's time for those remaining with a conscience to take action in the public sphere to make these extractive processes accountable for the damage that they do, and restore the natural world that provides life to all of us. The examination of these damages is being followed here. as is the progression of lawsuits against governments that fail to protect humanity from the predations of global wealth.

Update 11/11/17:  The global oligarchy belongs to a new class, untethered to nation or party.

Update 11/27/17: Consumerism is the major cause of global warming - NextSystemProject

Update 12/1/17:  Consumption is the bottleneck for sustainable development

Update 10/4/21:  United States... centers on its expanding complicity in the offshore economy

Update 1/1/22:  Malta is a target of an international money laundering crackdown.