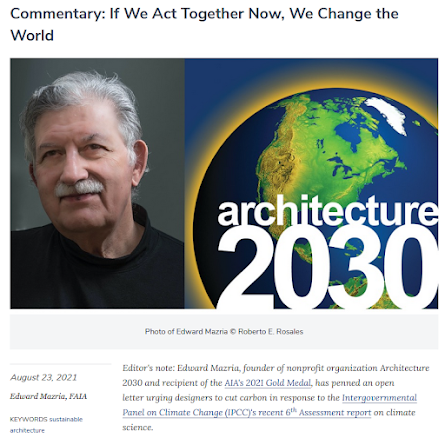 The new Biden administration has awakened the Federal beast, which is stirring with new life on the carbon issue. Biden’s pledge on Earth Day 2021 is in line with what environmental groups and hundreds of executives at major companies have pushed for. The president announced the target at the closely watched global leaders’ climate summit on April 22, during which he hopes to urge global cooperation to address the climate crisis.

“This is the decisive decade,” Biden said at the summit on Thursday morning. “This is the decade that we must make decisions to avoid the worst consequences of the climate crisis.”

At the state level, California is setting policies in concert with many organizations that are moving ahead with their goals and solutions to the carbon emission emergency that has been declared. The architects and contractors are already developing their methods for reducing not only emissions, but are also the decarbonization strategies that drastically reduce the impact of construction in cities and towns. This is being done in concert with the American Institute of Architects California (AIACA) and Architecture 2030 leadership by Ed Mazria FAIA.

Rocky Mountain Institute, headed up by Amory Lovins, is working with industry to transform the global energy system to secure a clean, prosperous, zero-carbon future for all. They are developing zero-carbon roadmaps for harder-to-abate sectors; accelerate development and deployment of breakthrough technologies; cultivate zero-carbon industries and ecosystems. These are some of the goals of their China program.

The response to the climate change issue has several major policy supporters that share similar climate goals. Recognizing that buildings account for nearly half of global CO2 emissions, the Carbon Leadership Forum, a non-profit organization at the University of Washington, is dedicated to accelerating the transformation of the building sector to radically reduce the embodied carbon in building materials and construction through collective action. This group's document was published in March 2021. To learn more about different policy initiatives related to embodied carbon or track updates on the policy initiatives in this document, visit the Carbon Leadership Forum’s Policy Toolkit.

The goals of the UNFCCC policies of 1.5C established in Paris are facing some serious pushback by the fossil fuel industry. It's not just a disinformation campaign, but steering governments to implement actions that will keep the oil flowing. For example, a human rights lawyer is facing prison for holding an oil giant to account talks about his Kafkaesque case.

"One of the critical facts is it’s not an accident. It’s a deliberately designed pollution event where Texaco decided to do it this way, essentially to play God with the people of Ecuador in order to save $2 or $3 a barrel of oil produced. The net result today, 50 years after this started, is you have the world’s worst oil disaster. You have thousands of people dead or dying from exposure. You have virtually no medical care. You have indigenous groups decimated, on the way to extinction because the forest is now poisoned by these deliberate acts of destruction. It can no longer sustain the culture, so it’s a disaster from every angle."

And at the same time, cities face new roadblocks in their quest to decarbonize buildings with policies that cripple efforts by local governments to establish sustainable policies.

The International Code Council (ICC) — an organization that manages building codes for much of the U.S. — this month removed the rights of local governments to vote on future energy efficiency building regulations, a move that could have major implications for cities as they seek to reduce their greenhouse gas (GHG) emissions within building sectors, according to industry experts.

So we're looking to Biden's leadership to help untangle these issues and policies that are colliding in the US as well as the global community acting under the United Nations oversight.