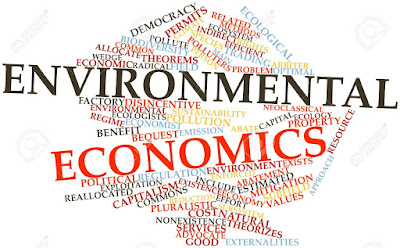 Let's revisit E.F.Schumacher's eco-bible that was published during the 1973 energy crisis: Small is Beautiful. It was radical for its day, and its time has now arrived, 45 years later and our planet is in crisis from unaddressed carbon emissions. Now our crippled EPA cites the following: economics is the study of the allocation of scarce resources, including how markets function and how incentives affect people’s, businesses’ and institutions’ behavior.  Within this discipline, environmental and natural resource economics is the application of the principles of economics to the study of how environmental and natural resources are developed and managed.

Here in the US, we're currently stuck in a high-consumption lifestyle that keeps us from moving ahead with the critically needed structural changes to our economy that would turn upside down the old, polluting and destructive industries that are in the grip of the oil and coal industries. It's the leftover Cold War economy. The waste in these systems is prolific and toxic, and its reduction is a key strategy in the transference to energy sources from natural processes. However, making the transition out of these structures and their grip on our economic system will be the biggest challenge the US has had since World War II and the Sputnik era that put man on the moon. We see ourselves falling behind, without the resolve and initiative that it takes to mobilize a common effort that changes the face of business practices in this country.

The GDP Chimera becomes increasingly irrelevant in the new economy as energy and technology services shift to new business paradigms. This fiscal "measurement" being tossed about these days as a means of allocating global carbon emissions allowances with respect to climate change is unfortunately not an accurate or reliable means of establishing parity in these emission goals. Gross Domestic Product is actually made up of many financial banking ledger tricks, between countries as well as global regions. This economic model can't account for the important factors of ecology, resources and climate stability, because it's anchored to an obsolete framework, the petrodollar that has been sinking in value since clean energy has become cheaper and more available.

Over the past 15 years the United States has decoupled economic growth and carbon emissions, raising the GDP benchmark 30% while reducing energy-related emissions 10%. And climate action has created millions of jobs, including nearly 400,000 in solar power, over 100,000 in wind, and over 2 million related to energy efficiency. The top states for clean energy jobs are spread across the country from coast to coast. New research examines the climate-related risks facing the fossil fuel industry and conclude that the sustainability train has already well and truly left the station -- and is not coming back.

We can't address our predicament without a new worldview. We cannot use the models that caused our crises to solve them. We need to reframe the problem. This is what the most inspiring book published so far this year has done. In Doughnut Economics: Seven Ways to Think Like a 21st-Century Economist, Kate Raworth of Oxford University’s Environmental Change Institute reminds us that economic growth was not, at first, intended to signify wellbeing. It's a move into a sustainable economic framework.

Increasing evidence shows that a strong U.S. economy and a healthy environment are not at odds with each other, according to a new blog by the New Climate Economy on WRI Insights. And a new WRI paper raises an uncomfortable truth: many of today’s business models are not fit for tomorrow’s resource-strained world. It suggests that normalizing the conversation about consumption with companies will set the groundwork for the pursuit of new business models that allow growth within the planet’s limits and generate stakeholder value in new and exciting ways.

Update 5/4/17: From MAHB - What would an alternative to the pro-growth economy look like? In this week's post to the MAHB Blog, we are sharing a project to compile a list of resources and organizations relevant to the discussions of why a new economic system is needed, what might the system look like, and how do we make the necessary transition.

Update 10/10/17: Why capitalism wins. And how a simple accounting move can defeat it. GDP accounting is what keeps capitalism on life support.

Update 2/25/18: GDP overshoot: in biology, it is called cancer.
Update 6/30/20: GEP looks at the contribution of nature to the economy, parallels what GDP does in measuring economic performance