How Dry I Am


As of the year 2010, Lake Mead's water levels on the Colorado River had dropped to levels below that of the 1930's, threatening water supplies throughout the southwest. The New York Times covered this in an article that laid out the issues with the water supply for the entire region as a La Niña condition develops in the Pacific Ocean, meaning a long, dry spell.

Lake Mead, behind Hoover Dam, is downstream from Lake Powell, which is a reservoir built to back up Mead, and Diamond Valley Lake was also completed recently for emergency water storage. All of these are being drawn down, with Mead being the foremost indicator of the systemic loss of capacity.

Approaches to this situation include developing more water sources as well as implementing conservation measures. Dr. Jay Famiglietti, head of the UC Center for Hydrologic Modeling, and member of the Santa Ana Regional Water Quality Control Board, has made a presentation on water resource management during this deepening drought. He is also a former Senior Water Scientist at the NASA Jet Propulsion Laboratory.

As Dr. Famiglietti put it,“There are different ways to approach the problem.  There is the supply side and there is the demand side.  One of the reasons why I default to the demand side is that it’s cheap and it’s easier to get people on board.  On the supply side, our capacity to do sewage recycling is basically limited by our population, and while I think the San Diego plant is great, there are issues.  The issues are the ones that are well-known; it’s expensive, it’s energy intensive, and I don’t think we have a long-term solution for how to handle brines.  Think about the California Coast; if we add a desal plant every 20 kilometers, that’s an awful lot of discharge.  I haven’t seen any discussions about the impact of that, so until we have the answers to those questions, I think that we are quite safe and conservatively thinking about conserving before developing new supplies.”

In the 1-hour video above from May 5, 2016, Dr. Famiglietti presents our knowledge of California’s snowpack, soil moisture, stream flow, reservoir and groundwater levels, all of which are at near record lows. He discussed the efficacy of the Sustainable Groundwater Management Act of 2014, as well as the future of water and food security in California and the United States.

Focusing on California, Famiglietti pointed out the glaring fact that we do not have enough water to do what we are doing. The drought is bad and it is not over, he reminded us. El Nino did not dig us out of our The major problem, the professor pointed out, is that California is draining its aquifers to feed the entire country and some of the world as well.

Of the 10 to 12 million total acre feet of water a year used by all Californians for all uses, state agriculture soaks up 80 percent. But California now loses 16 million acre feet of water a year. Thousands of wells are going dry. Our lakes and rivers shrivel. Simple math shows we are farther and farther behind. A graph on one slide had a line jiggling somewhat reassuringly up during wet winter seasons and down during summer seasons until about 2012. At that point, the line lost its upward thrusts and plunged down to 2016. Since ground water is not as apparent as rain, snow, rivers, and lakes, Famiglietti feels we have ignored its significance at our peril. Our aquifers are not refillable. At this point Famiglietti showed slides of the entire globe and its thirty-seven major aquifers, half of which are shrinking as well, especially through highly populated southeast Asian regions.

What can be done? Famiglietti’s answers posed drastic solutions. California must stop draining its aquifers to feed the rest of the nation. Agriculture will have to go elsewhere. Or, perhaps Californians will have to go elsewhere. The present water crisis will dictate massive change. One fortunate fact: half the world gains water while the other half loses it. Famiglietti believes that we may see huge water pipelines transporting the precious liquid. He believes that it is only fair: California sends you food, you send us water.

NASA has been mapping underground water reservoirs with its Gravity Recovery and Climate Experiment (GRACE) satellite, which has been operational since 2002. This gives us a picture of the state of the underground aquifers that have been tapped by agriculture. It's used to determine the extent of water resources and how much has been drawn down by pumping and extraction. Quite a lot, it turns out, and the aquifers in the western United States are becoming badly overdrafted. Dr. Famiglietti has been using these maps to point out the need for management of this groundwater depletion as part of an array of strategies to ensure adequate water supplies in the western United States.

A strategy will need to be developed very soon for managing the water deficit in our state, before the serious shortages start to kick in and create a virtual war between agriculture and the urban areas. This will play out in the Bay Delta Conservation Plan water projects. It will be the biggest impact of climate change in California alongside the ever-expanding forest fire season we're experiencing now.


Update 10/22/18: Saudi Arabia and China are among the countries that have turned to the United States and elsewhere for more water supplies.

Update 10/24/18:  Here’s Where the Post-Apocalyptic Water Wars Will Be Fought 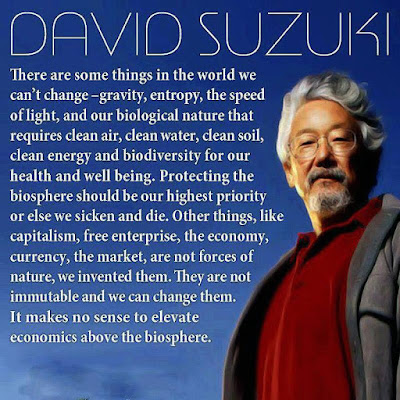 The IPCC Special Report is here from the UN. It documents the immediate impacts on the environment that 1.5C will likely have. It warns that strong efforts would be required to prevent disastrous consequences from dangerous levels of climate change. This means that World War II was a cakewalk compared to this, all hands on deck. An analysis of the report: "The best time to start reducing emissions was 25 years ago. The second best time is today."

Johan Rockström, chief scientist at Conservation International speaks about it.“Climate change is occurring earlier and more rapidly than expected. Even at the current level of 1C warming, it is painful,” he told the Guardian. “This report is really important. It has a scientific robustness that shows 1.5C is not just a political concession. There is a growing recognition that 2C is dangerous.” In order to blunt the coming climate change at that level, it's necessary to abandon coal and other fossil fuels in the next decade or two.

Having said all that, there's immediate, large-magnitude things that can happen right away to drastically reduce emissions. Such as protecting, preserving and restoring our great forests. Such as elimination of fossil fuel subsidies by governments across the globe. Such as rapid technology advancement in wind and solar, along with the upgrading of the electrical grids and establishing many stand-alone power sources at its periphery. Transportation in all areas, such as auto, truck, rail, airlines, and especially port traffic from overseas, will need to become electrified and supplied with renewable fuels. These strategies are not difficult, and can be widely employed in all countries, which need to develop the revenue for this. Decarbonization also has possibilities in the future with the nascent carbon capture industry that's progressing now.

There are many other things that can be done by private industry and by municipalities that can contribute to the lowering of carbon emissions in the very near future. But we don't have much time, and we need to mobilize. All of us.

Update 10/8/18: Nobel Prizes are awarded and given to economists referencing ways to adapt growth to climate change.

Update 11/2/18: Absurd for society to kneel before the dictates of the marketplace and that its primacy should determine how you structure government.

Update 11/12/18: The IPCC report tells us that climate breakdown is inevitable if we continue with growth-based neo-liberal economics.

Update 7/1/19:  Scientists are calling for an end to capitalism as we know it.